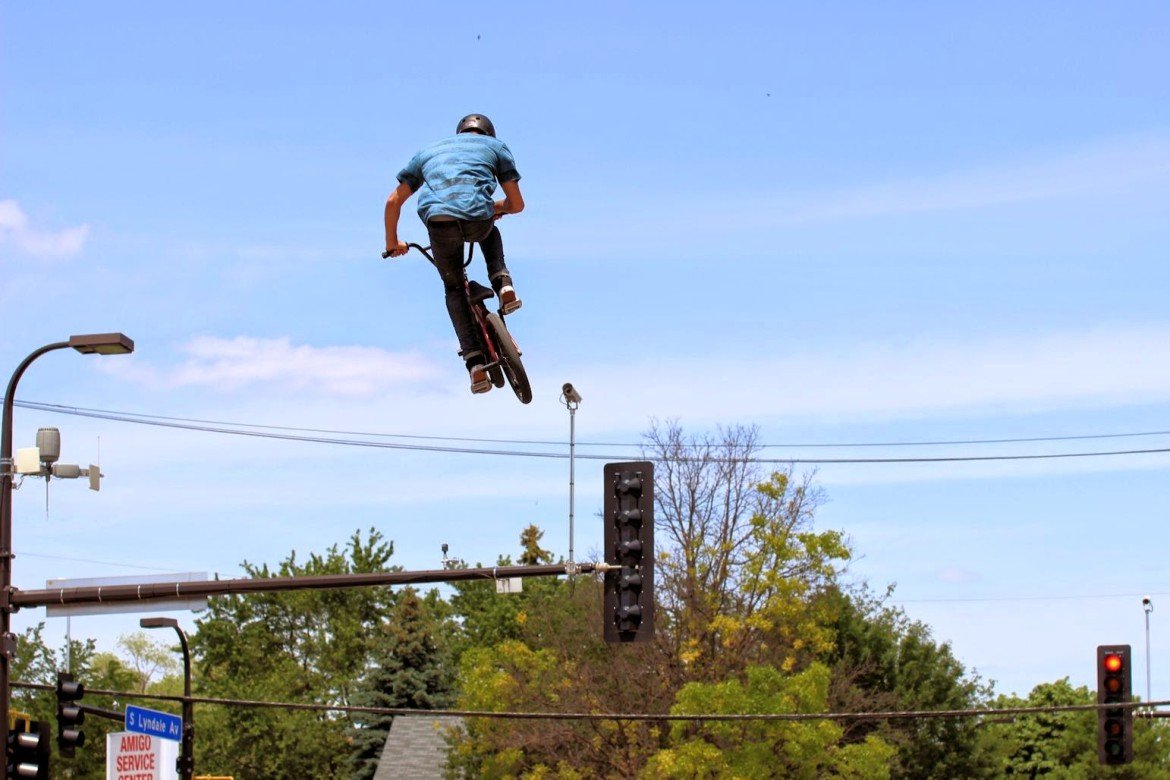 If it’s a summer weekend, there must be a street fair – a chance to buy crafts, eat from food trucks, and engage in the great warm-weather sport of people watching. Street fairs, as enjoyable as they are, are all pretty much the same, right?

The inspiration for the Open Streets movement, which has spread across the U.S., is the ciclovias (literal translation: cycleways) which began in Bogota, Colombia, more than forty years ago. Every Sunday and major holidays, 75 miles of main thoroughfares are closed to motor vehicles so that they can be used by an estimated two million bicyclists, skaters, runners and walkers each week.

And like the ciclovias, Lyndale Open Streets participants will bike, skateboard, run, walk, and rollerskate; there will be dancing and yoga and exercise routines – in short, lots more movement than you’d expend in your car. “Most of the Open Streets draw about 5,000 people. Lyndale draws about 15,000,” Tsatsoulis said.

Lyndale Open Streets will span 20 blocks, from West 22nd to West 42nd, and will run from 11:00 a.m. to 5:00 p.m. “Lyndale Open Streets brings people together to meet their neighbors,” said Larry Ludeman, co-president of the Lyn-Lake Business Association. “Besides people biking, it’s a great way for everyone to take back the street.”

The action starts at 11:00 with yoga at Lake Street, led by the Gorilla Yogis. Also at 11:00, Nice Ride, the nonprofit bicycle rental organization, will celebrate its fifth anniversary with free cupcakes and green apples for the first 555 people who stop by their booth. Other highlights include all-day long music at four different locations, including the Wedge Co-op stage, which kicks off at 12:15 with rapper/song writer Maria Isa, followed by a DJ set. Local heros Up the Mountain/Down the Mountain will perform folk/metal set (yes, you read that right) at 1:30, followed by the hip-hop, rap and spoken word of OFF-10. Jug band the Dumpy Jug Bumpers wraps up the Wedge stage beginning at 3:00.

“There really is something for everyone,” said Tsatsoulis. “For kids, there’s a bouncy castle and Twin Cities Adventure Playground. There are BMX stunt shows from Penn Cycle at noon, 2pm, and 4pm at 36th Street. At 40th Street there will be a skateboard competition and demos.”

Metro Transit, an Open Streets sponsor, is providing free transit to all of the Open Streets events. Go to https://www.snapsurveys.com/wh/s.asp?k=143214101262 to download a free pass.

A summer of Open Streets Coming to a neighborhood near you

For more information, go to openstreetsmpls.org