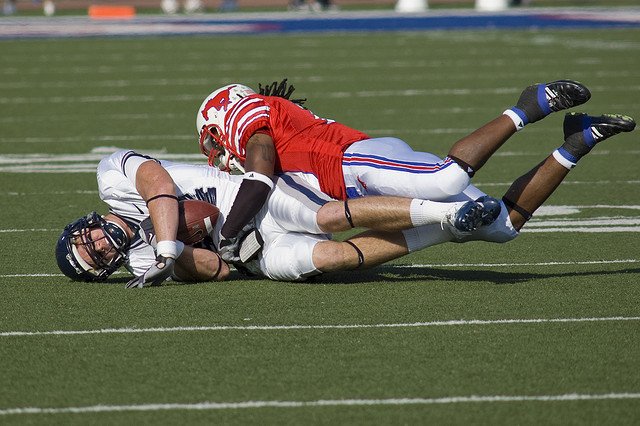 The poor NFL. They’ve had just such a bad round of press lately, with their various players beating up their wives, girlfriends and children. Add to that racist team names and a new stadium in Minneapolis that’s coined to be the death trap for birds, they just can’t catch a break.

Now I, as a non football watcher (I have tried, believe me, to get into it) don’t presume to know the answers to solve all of the NFL’s public relations disasters. But might I humbly suggest a small change that I believe would make a world of difference.

Get rid of tackling. I just never understood why a game that is supposed to be fun would consist of grown man wrestling each other to the ground, bashing their bodies against one another. In real sports like basketball and soccer, you get a penalty for beating up on someone. Not in football (or hockey, which is another story). In football players are encouraged to sacrifice their bodies for the good of their team. It’s absurd.

So there’s this thing it’s called flag football. It’s basically the same as regular football, except that instead of tackling the person who has the ball, you only have to remove a flag they have in their belt. There’s different variations on the game, and of course there’s also touch football. I’m not particular about what kind of alternative game the powers that be work out, but I think it’s high time that the NFL at least consider the possibility of removing tackling as a central point of the game.

Let’s look at the facts. About a third of NFL players develop long-term cognitive progblems, according to the New York Times. Plus, children and youth football players have the highest rate of concussions of any sport, according to the CDC.

It’s a dangerous sport, both in that it risks injury and long-term affects for its participants, but also because it glorifies violence. Every week, fans tune in on TV and in sports stadiums as grown men tackle one another. This ritual simply desensitizes both the fans and players to violence, which bleeds into other aspects of their daily lives. If we want to dismantle our culture of violence, we will take steps to remove violence from our activities that supposed to be family friendly.

Why not simply take out the violence from the equation? NFL players are skillful players. Wouldn’t it demonstrate their skill even more if they had to play their parts without the use of force? If they simply had to grab a flag out of their opponents belt, it would mean that it would require a far greater display of agility and skill to get away from the other team. Quarterbacks would have to have even more precise throwing ability than they do now and defenders would have to be able to stop their opponents through their nimbleness rather than force.

It’s time for football to evolve. Let’s take out the tackle.