It’s been an exciting week for the Twins. It started last Friday and Saturday with two exhibition games against the St. Louis Cardinals. These two games were really about Target Field more than the games themselves. It was the first time the Twins had an opportunity to see how baseball will play in their new home.

One of the challenges is seeing how the ball will play off the outfield walls. Denard Span experienced that most noticeably when he placed himself to play a ball off the center field wall. The ball hit the wire protecting the electronic display and bounced to his left by at least 15 feet. Because this was still spring training the Twins were able to relax and learn. However, the atmosphere at the game felt nothing like a spring game for the fans. It was really fun to see the excitement in the eyes of the players as they waited on the steps of the dugout to run out onto the field for the first time.

Sold-out crowds on both Friday and Saturday reacted to the game as if the Central Division championship was on the line. Denard Span provided the most excitement on offense on Friday, when I was there—leading off the game with a triple and hitting the first Twins home run at Target Field in his next at-bat. The weather for these games was also cooperative. Friday it rained earlier and harder than predicted, but by 3:30 the rain had stopped and the sun was shining. By the time I was leaving my house, I actually threw my sunglasses into my bag on top of my blanket and my umbrella.

I was happy to have my blanket because I was sitting in the top row of the Skyline View Terrace and the wind was coming in across the open plaza directly across from us. The great thing about the top row was that it provided the promised awesome view of downtown, but I also got to see the sun set behind me. Ask for Row 14 if you want to experience this view. Saturday was cooler, but the sun shone for the entire game. 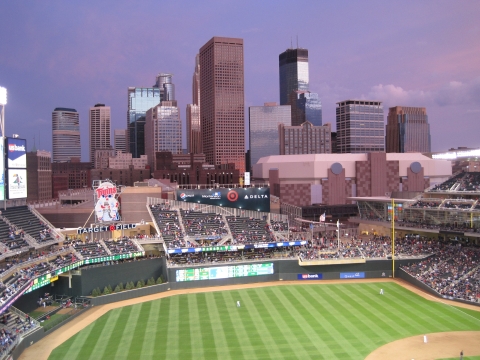 Monday the Twins were in the sun of Anaheim opening their season against the Angels. They lost the first game and won the remaining three—the first series win in Anaheim for the Twins since 2002. The Twins hit nine home runs in those four games, the first time in their 50-year history that they have done that. They traveled Thursday night, arriving in Chicago at 6 a.m. Friday.

Maybe the fact that they were travel-weary caused them to go back to small ball Friday night, beating the Chicago White Sox in eleven innings without the help of one home run. Jim Thome made his debut as a Twin at US Cellular Field as a pinch hitter in the 10th inning, striking out instead of hitting the home run we were hoping for. It was up to Joe Mauer and J.J. Hardy to deliver the go-ahead run in the 11th inning.

Mauer came off the bench and led off the inning with a walk. After Span and Orlando Hudson advanced him to third, Hardy got a single that scored Mauer. Jon Rauch came in and picked up his third save of the week, calming some of the fears caused by the loss of Joe Nathan for the season.

The Twins bandwagon started rolling early this year, with the excitement over Target Field and the signing of Joe Mauer to an eight-year contract extension. The loss of the first game of the season was a small speed bump, but the four-game winning streak has the bandwagon picking up momentum heading into opening day at Target Field. I, for one, am not jumping on this bandwagon. How quickly we forget that baseball is a marathon, not a sprint. When the excitement dies down and the Twins settle into their six-month, 162-game season, there will be plenty of disappointments and losses. Remember: winning 90 games (and losing 72) is considered a very good season in baseball.

Sports Illustrated is predicting that the Twins will go 88-74 and win the Central Division but lose in the first round of the playoffs to the Yankees. Sound familiar? Remember the despair of the media last summer when they were writing off the Twins with a month left to play? I would rather sit back and enjoy baseball for what it is: a leisurely game that is marked by three outs per inning, nine innings per game, no ties, and no clock. The game isn’t over until the last out has been recorded and there is a winner and a loser. Some games we will have a tie and get bonus innings. The beauty of this year is that we can actually sit back and enjoy the game played outside like it was meant to be.