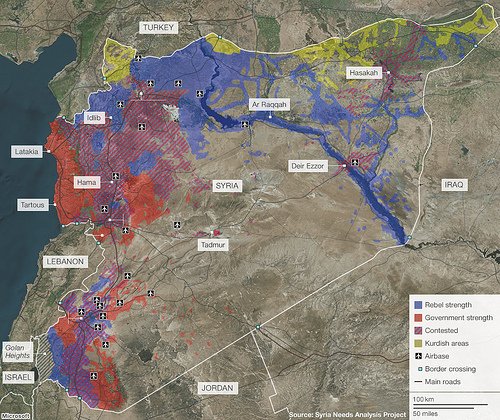 I’m skeptical of suggestions of ad hoc war crimes trials as a way to respond the chemical weapons attacks in Syria, partly because they’re so far just congressmen tossing off suggestions at a time when Congress is working on the specific wording of resolutions already, but let’s suppose the idea was developed and serious. There are other problems. When there’s already a permanent International Criminal Court which most nations have signed on to, but not the US, the only interest in an ad hoc court might come from us. Are we willing to do that alone? Would such a court have any legitimacy? If some future Syrian government would support such a court, it won’t actually need or even want our help. Even if such a court can get up and running, it would have the legitimacy problem of being perceived as victor’s justice. Even that assumes that the prospective defendants can be brought to trial. If they attain or retain power, trying them isn’t going to happen. Besides, maybe knowing there’s an indictment hanging over their heads, maybe they have an incentive to fight to the bitter end, well past any realistic hope of victory.

Back to the ICC, it’s already there, and already legitimate to just about everybody except us. What if instead of trying to create some ad hoc court just for Syria, Bashar Assad and everyone accused of using chemical weapons, or committing any other war crimes, could be indicted before the ICC? What if the president dropped the idea of firing missiles, and went for signing on to the ICC instead?

I ask that as fully aware of the risks of doing nothing immediately about the Syrian government’s chemical weapons attack on Aug. 21 as when I wrote about the risks of various options. I’m still concerned the Syrian government will think it got away with it and will have every incentive to keep launching some attacks (for those who still think the rebels might have done it, though I scarcely credit such claims, if the rebels did it, they will have gotten away with it, and will have the same incentives to use more). I’m concerned the risk of using such weapons will be reduced for every government considering using them. I doubt the US will be perceived as weak, because our ability to launch massive missile attacks or invade or whatever we want to do is still there, but could we be perceived as feckless, immobilized by our internal problems? Maybe. I make no assumption foreigners understand our government better than we understand theirs, which is often not at all.

There’s also the political reality that not only might the Congress deny authorization for a retaliatory strike, but Obama seems unenthusiastic about the prospect himself. If he was gung-ho to go into Syria, he could have used the plenteous pretexts the Syrian government provided over the first couple years of the war. Having observed the British Parliament say no to the prime minister, he no doubt realized going to Congress was incredibly risky. The fact he took the risk could just mean he has that much respect for Congress’ war making power, but it could mean he wants an excuse to cancel an attack on Syria. Someday we’ll probably know, but right now, all we know is authorization might pass — or might not.

So here’s what I suggest to the president: make an offer to the Republicans to drop the whole notion of a retaliatory strike, which means not having to cast a politically perilous vote on a resolution. In exchange, they have to ratify the treaty that created the ICC. Yes, it’s already running, but without us. Republicans have so far refused even to consider ratification on the grounds that doing so would place Americans under the court’s jurisdiction. Maybe they believe nothing Americans do can be considered a war crime, that Americans will be tried for crimes we don’t consider crimes, or that the court will pick on Americans just because it can. Whatever, they won’t sign on, and that’s no surprise considering how paranoid they get about Agenda 21, which is basically just suggestions for sustainable development. The gun nuts have gone nuts … OK, more nuts … with paranoia about the treaty the UN has been working on to regulate the international small arms trade. It’s about shipping large numbers of arms to non-state actors, but they have their base thinking UN troops will be walking into their houses to confiscate the shotgun behind the door. So no wonder we haven’t joined the ICC.

And no wonder I’m not confident my suggested offer will be accepted, yet maybe this is the chance. It could have some impact in Syria, since we can tell the regime “we joined the ICC just to get YOU”. We have a ready-made, tested and functional court instead of trying to create something, and above all, no having to vote on firing missiles. Above all, long term, I see the court as a means of establishing international law as something with teeth.

Yes, there are still some of the same problems, like war criminals who hold power don’t get dragged before the court. There’s a theory that the indictments of the president of Sudan and the leaders of the Lord’s Resistance Army actually negotiations by raising the cost of conceding any power. So yes, it’s possible an indictment of Assad and top loyalists could discourage them from negotiating. On the other hand, anyone seen any attempts to negotiate yet? Me neither. Makes it hard for me to see what there is to lose by an indictment.

Again, I still see the risks of not retaliating, but there is a lot of good to be gained by getting the US to join the ICC. I don’t know how much our ratification will add prestige or legitimacy to the court, but it sure can’t hurt, and we can bring resources to bear. Putting another restraint on governments, warlords, whoever might want to start a war or conduct it in an illegal way, even if just a disincentive in the form of a threat of what might happen to you if you start a war and lose, seems worthwhile enough to accept the risk of not acting immediately against Syria. The risks to Americans seems quite small since my understanding is the court’s jurisdiction is not retroactive, meaning the Bush people who invaded Iraq and the Reagan people who we now know supplied chemical weapons to Saddam would still be safe, but future war criminals would be subject to trial — which is fine with me.

So Republicans, ratify the treaty, and you can immediately have a court, send a strong message to the Syrian regime, and not have to vote on an authorization for force.

At top: Map of Syria showing approximate area held by each side