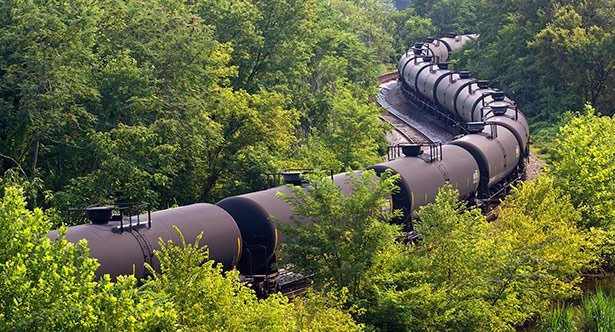 It may seem strange to work up much sympathy for a booming industry that killed 47 people while virtually leveling their Quebec town last year and later touched off a giant fireball over Casselton, N.D., on the Minnesota border, but that’s what I’m feeling these days for the railroads.

Since those derailment conflagrations involving North Dakota crude oil, it’s been open season on the once largely neglected workhorses of commercial transport. Everyone, it seems, has a complaint against what I’d now call “the engine that dissects us.”

Upper Midwest farmers are upset over delayed shipments of grain overflowing their bins and railhead elevators. Amtrak passengers are getting Soviet-style on-time service because of a glut of freight on shared tracks. A federal analysis found most railroads grossly underinsured for the likely damages of an oil train accident.

National Farmers Union President Roger Johnson noted last week that more than 95 percent of all BNSF Railway’s past due cars are in Minnesota, Montana and the Dakotas. Meanwhile, he said, “farmers are now dumping wheat on the ground.”

The NFU’s Johnson also protested shipping delays plaguing corn-based ethanol fuel, nearly two-thirds of which is delivered by rail. “Failure to bring ethanol to market will hurt consumers because of higher gasoline prices and will work against our efforts to offset imports of foreign oil,” he wrote to the U.S. Surface Transportation Board.

Now there’s a conundrum for you. What do farmers blame for their transport troubles? Of course, all the oil trains clogging the tracks, which also reduce the need for imports of black gold.

In their own interests as well as everyone else’s, the railroads are working mightily to get more efficient. Warren Buffett’s BNSF alone is investing half its annual profit—$5 billion—this year in beefed-up infrastructure, rolling stock and staff. In addition, BNSF is negotiating a labor contract provision to allow most of its trains to be operated by a single engineer instead of the standard two-person crews. This has sparked blogosphere outrage, raising the specter of even more dangerous oil shipments. The company insists it wouldn’t trim crews minding any hazardous cargo, but critics doubt the pledge and call for federal regulators to step in.

And then there’s the insurance issue. The small railroad whose runaway oil train devastated Lac-Magantic, Quebec, carried only $25 million worth. Cleanup alone, not to mention payments for death, injury and property damage, is expected to cost $200 million. So the Montreal, Maine and Atlantic Railway has declared bankruptcy and its assets have already been auctioned off.

But even $1 billion in coverage, the most available in the insurance market, might not be enough in a worst-case train wreck. Addressing this problem, BNSF has proposed an indemnity system modeled on that of the nuclear power industry. Nuke companies pay into a federal disaster fund and get some liability protection in return. At least one critic says the railroads don’t deserve that kind of treatment.

As Politico pointed out, common carrier rules bar railroads from refusing any cargo or shipper-owned tank car that meets (generally loose) federal standards, but gives them all the responsibility for accident damages. Despite the fistfuls of money they’re making these days, that’s a tough situation. Considering that the alternatives to freight by rail are nonexistent, unappealing or economically unsustainable, let’s keep pushing the railroads to safer and more prompt service, but also muster a little sympathy for these iron horse devils.