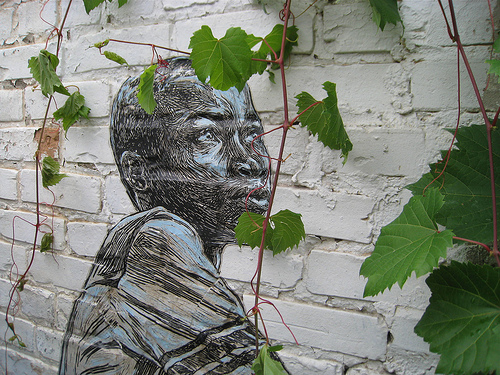 The artist Swoon’s ties to Minneapolis run fairly deep: She helped launch the Miss Rockaway Armada from the Mississippi shores here (and did some wheatpaste pieces around town) in 2006; her work was part of the Minneapolis Institute of Arts’ 2010 exhibition Until Now; and she did a residency last year with the Kulture Klub Collaborative, an art program with youth experiencing homelessness. Near Minneapolis’ Cedar-Riverside light rail station, I recently spotted one of her works on a wall, nearly covered by vines. But it’s about another locale to which she has deep ties: Haiti.

The work features an image Swoon also used on prints created to raise funds for the Konbit Shelter, “a sustainable building project with the objective of sharing knowledge and resources through the creation of homes and community spaces in post earthquake Haiti.” (See the construction of the shelters on the project’s blog.) The project’s first community center was inaugurated this January.

A version of the piece in Minneapolis appeared in a London show, and on London streets, and here it has an equally global context. Situated in the heart of Minnesota’s Somali community, it’s now got company across the tracks in Broken Crow’s new mural of running cheetahs. Broken Crow’s travels took the duo — Mike Fitzsimmons and John Grider — to Gambia last year just as Swoon was returning to Haiti. Her journeys, likewise, have hit the African continent: Last spring, she taught artmaking in Zambia. 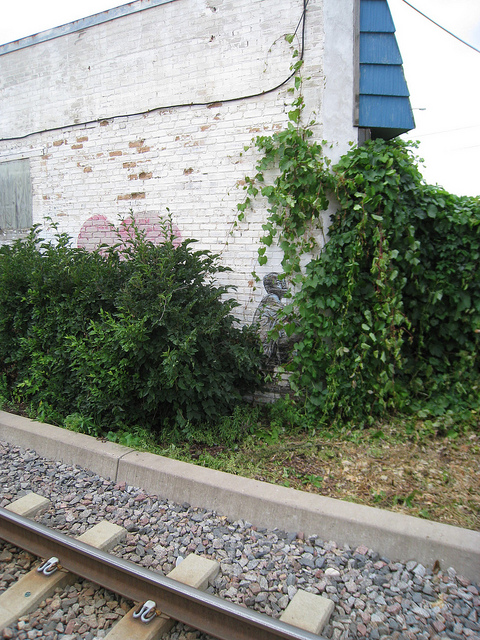