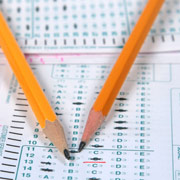 As if we didn’t have enough evidence that testing mania had gone toxic, now we have accusations of cheating at what are supposed to be the schools we look up to. The Atlanta Journal-Constitution, following its investigation into Atlanta’s own cheating scandal, widened its gaze to look for cheating elsewhere. Boy, did it find some.

We’ve had enough cases of cheating to know some of the warning signs. The Journal-Constitution in particular has some hands-on experience reading the patterns that suggest cheating. It’s been on a mission in recent months to flag possible instances of cheating using the lessons of Atlanta’s scandal. (In case you’re wondering: Yes, Minnesota schools have been flagged. You can see the list here.)

The newspaper looked into just over 600 Blue Ribbon Schools, identified by the federal Department of Education as posting exceptional results. Traditionally reserved for consistent high performers, the honor in more recent years has also gone to schools serving low-income or minority populations that show rapid growth on state test scores.

Sometimes that rapid growth is too good to be true. Working with researchers at universities and think tanks, the Journal-Constitution has worked up a model that identifies test score increases that are far outside the bounds of what are generally accepted as growth attributable to instructional changes. Dozens of Blue Ribbon Schools have been identified as posting unlikely gains, many of which are statistically impossible.

Now, are there a few schools out there that may in fact have seen such remarkable gains honestly? Sure. The Journal-Constitution‘s analysis is probably over-sensitive, identifying some normal statistical variation as possible cheating. Nonetheless, the breadth of suspicious results is a cause for alarm.

Obviously, there is no ethical justification for cheating. It is unprofessional, damaging to kids, and just plain wrong. It is also an inevitable outcome of a system that puts so much weight on a limited set of measures to define success. There are other schools that have made honest gains on test scores, but have done so at the expense of a broad curriculum. This isn’t cheating, but it still isn’t the education many families want for their children.

We need to move past this testing obsession and restore some sanity to how we think about and analyze schools.