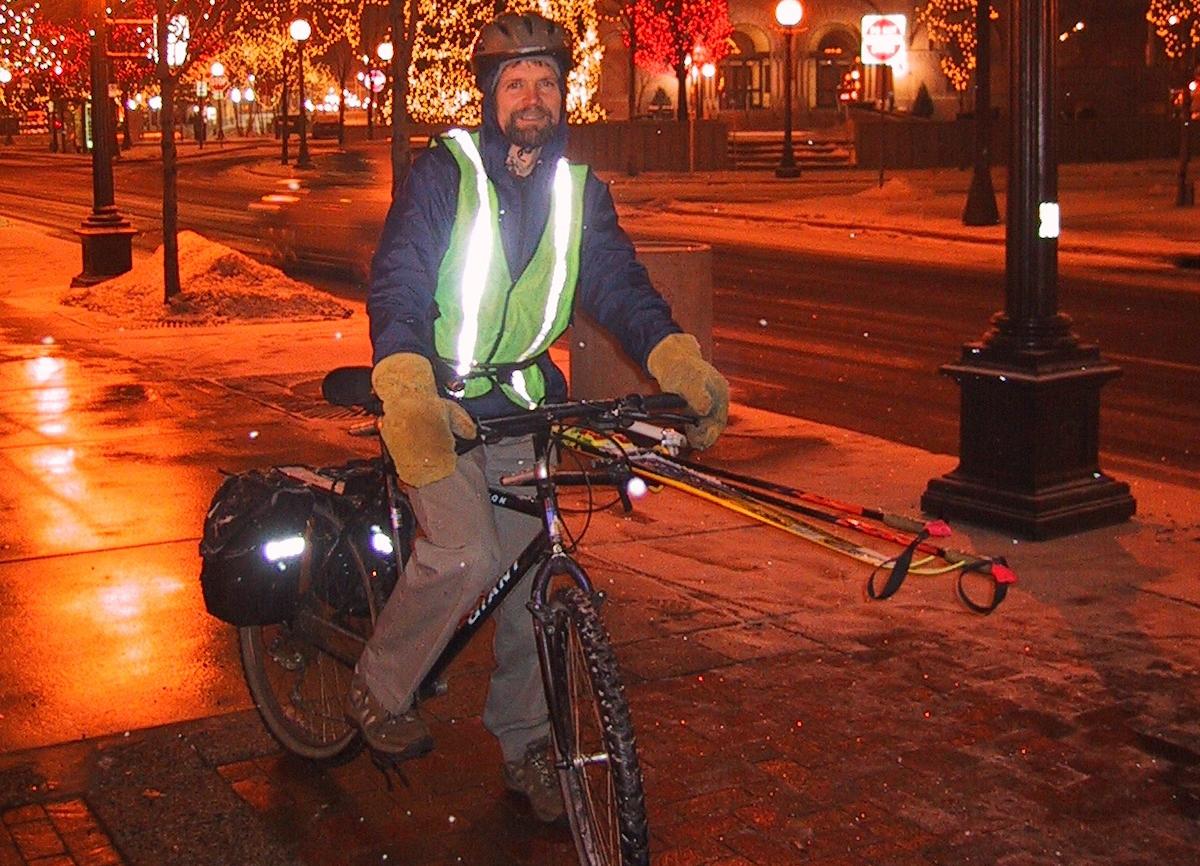 (Photo above courtesy of Steve Clark; all other photos by Daniel Murphy)

Winter in the Twin Cities means at least three things for commuters: slower driving, jam-packed bus rides, and less biking. However, as we continue to invest and develop more bicycle infrastructure in the city, year-round biking is most likely bound to grow as well.

Last winter was the first time I attempted biking in winter at all. My fears were that I would fall constantly and that my face would freeze over with snot. I didn’t fall once, and my face remained plenty warm and relatively clean with my simple scarf that I used to cover it. What I didn’t entirely anticipate was how poorly my gloves would work, and just how badly my bike would get ruined.

Luckily for me, last winter was a mild one, something about which most of my friends have no problem reminding me, and this year I plan to come much more prepared. I spoke with some well-seasoned friends and a few other veterans at surviving a Minnesota winter on two wheels and put together a list that should save you the trouble of the mistakes I made last year.

Here are ten tips to surviving winter biking in Minnesota. 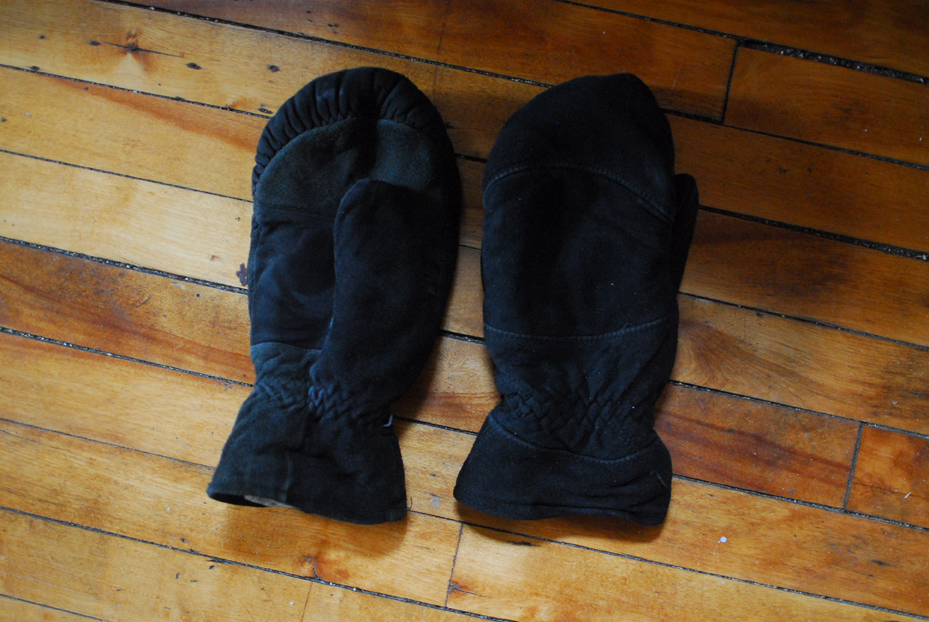 Don’t be like me last year. Buy proper gloves.

Protecting your hands and feet is the most important aspect of winter biking, said Steve Clark, who has been a year-round biker for more than 40 years and is the walking and bicycling program manager for Transit for Livable Communities. While your body warms itself up pretty fast from working, your hands and feet will get cold quickly on longer rides, or just when it’s very cold out, he said.

For his hands, Clark layers wool underneath leather mittens, which he said are great for wind-proofing. For your feet, he suggests buying a pair of boots that are two or three sizes too big and wearing two pairs of wool socks with them. 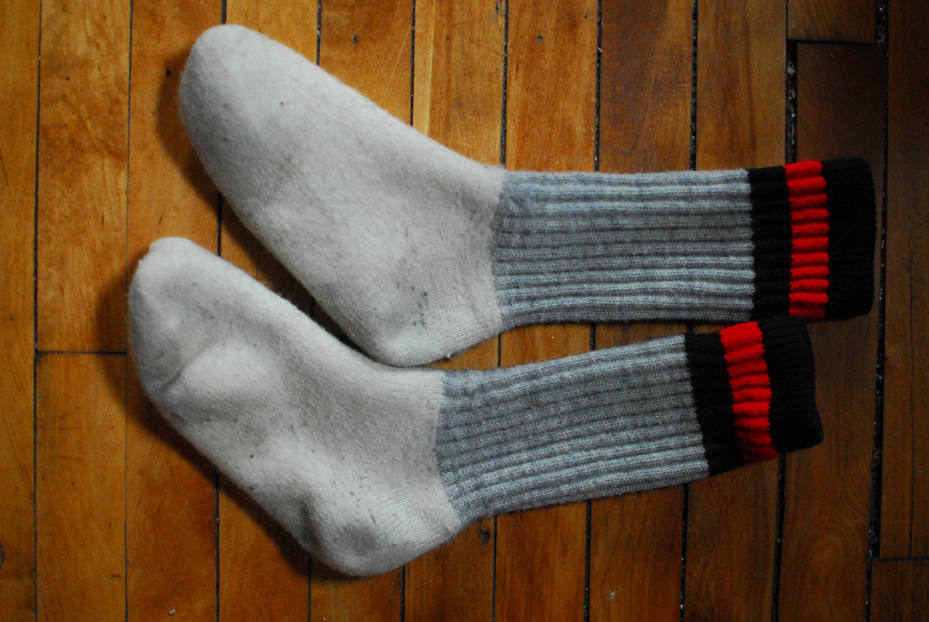 However, layering too much can be problematic, said Evan Giannobile from Minneapolis, who has been riding year-round for six years.

“Try not to have your shoes too tight,” said Giannobile. “It cuts off circulation. I’ve made that mistake. Your feet go numb.”

A good pair of thick windproof gloves, a good pair of wool socks, and some solid biking shoes should do the trick, said Giannobile. 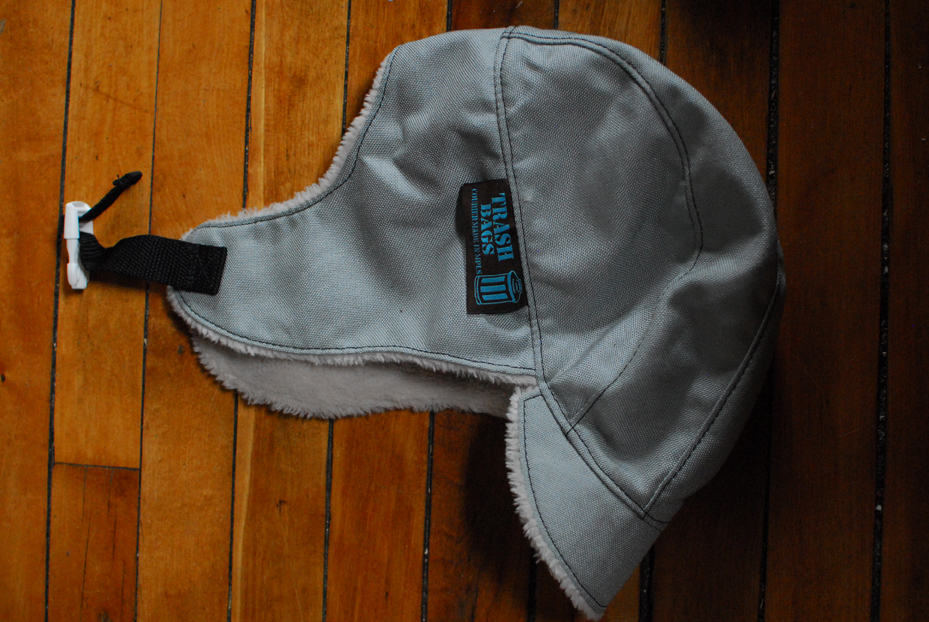 Finally, don’t forget your head. Most bike shops sell face-masks, winterized helmets, or bike caps to wear underneath your helmet. But you can always improvise.

“I have a fleece balaclava for my head, ears, and face,” wrote Soren Jensen, another year-round biker, in an email. “It might be the most important piece of winter gear I own!” 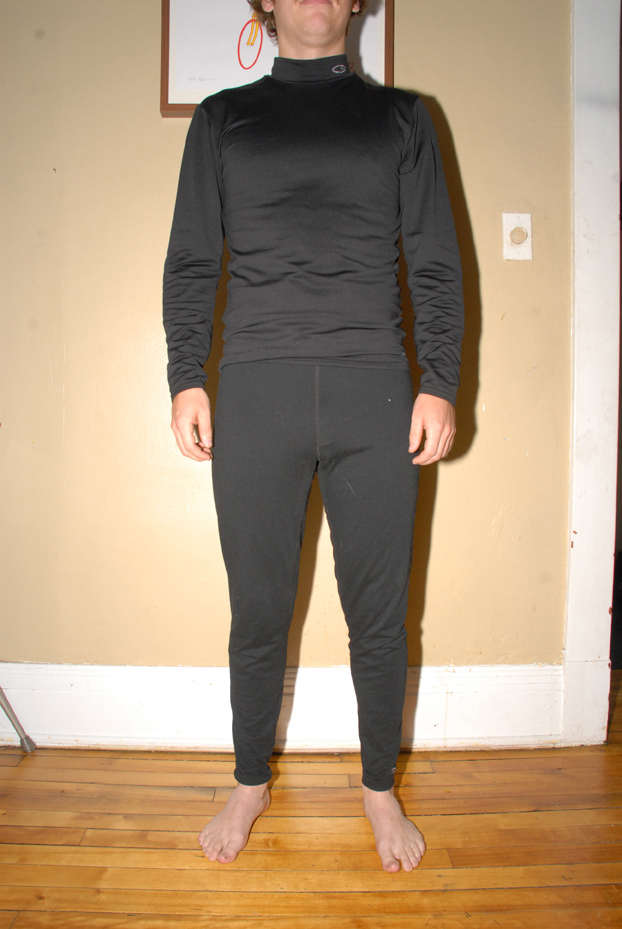 “Winter biking is all about layers,” wrote Jensen. “Usually, I have at least four layers, including an undershirt, long sleeve shirt, fleece sweater, and windbreaker. When it gets below zero, I usually swap the windbreaker for a used ski jacket I found at Goodwill.”

The idea is that you can keep warm, but if you get too warm you can always strip off a layer. This is often the case after you start biking and your body warms itself, said Clark. 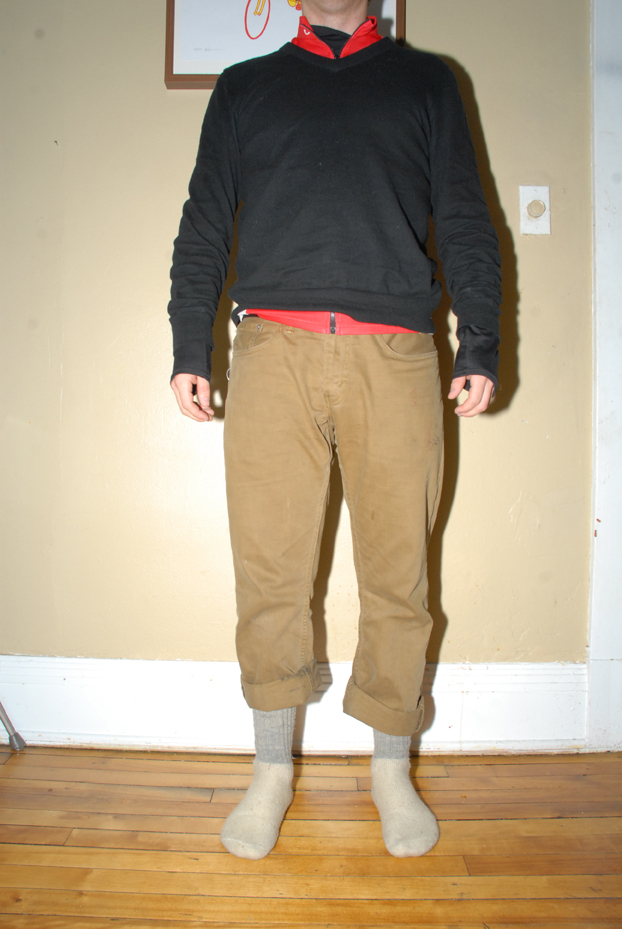 If you’re a leisurely biker, dress warmer, but if you plan to bike faster or for a longer period of time, you can dress down, said Giannobile. “Don’t underestimate body heat,” he continued. “Don’t be worried to start off cold.” 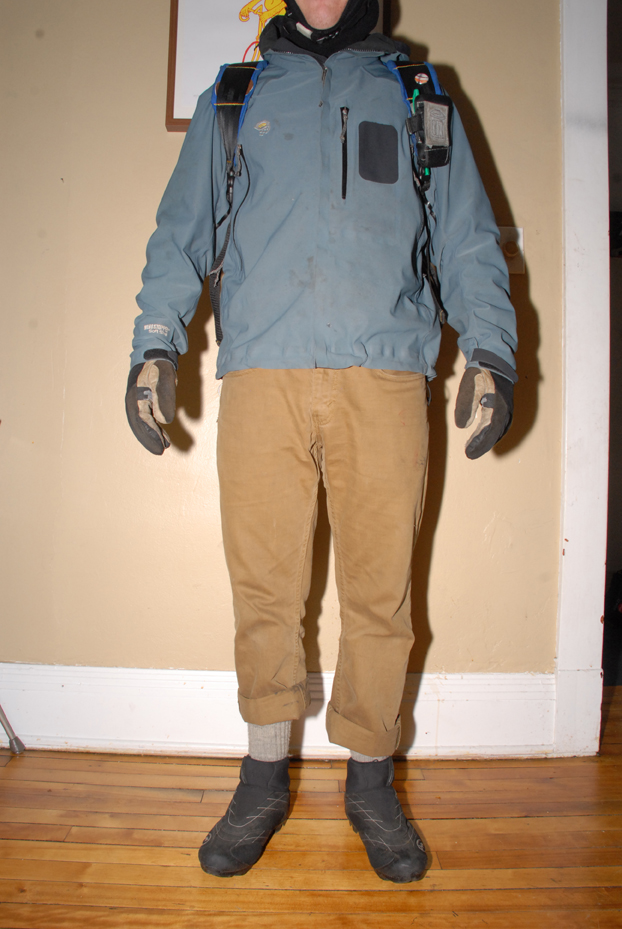 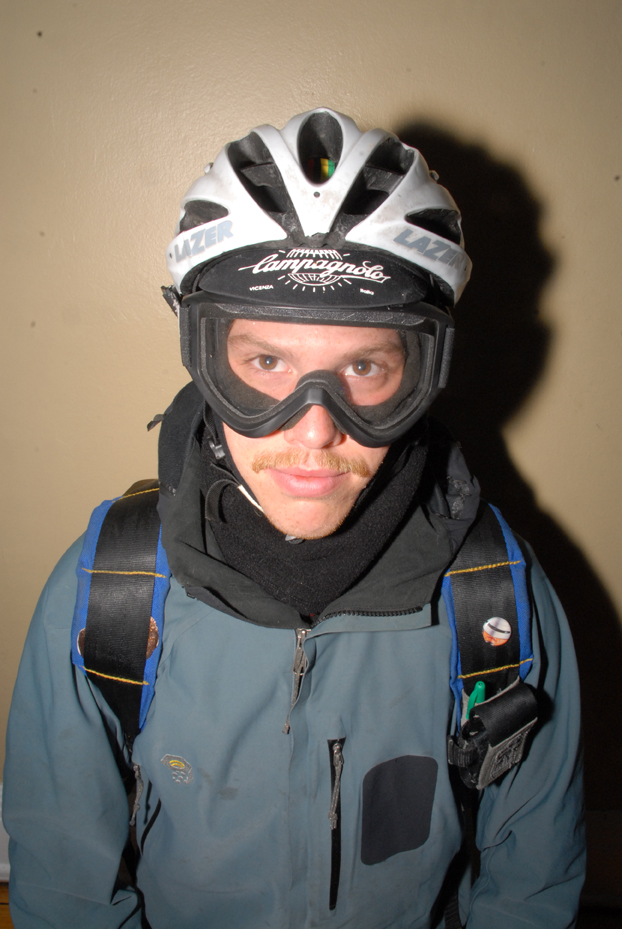 The biggest problem with my gloves last winter was that they weren’t windproof. They provided warmth at first, but as soon as I started moving, the wind would literally blow the heat right out of my hands. So avoid cotton gloves, wool gloves, or even fleece gloves, unless you plan on covering them with something else, like leather or a synthetic pair of windproof gloves.

In fact, you should probably avoid cotton all together. The reason is that cotton will absorb all of your sweat, cool down, and stop insulating you, said Clark. Instead, said Clark, you need something that wetness can simply pass right through, like wool.

“Wool is good for everything,” said Clark, “because even if it gets wet from sweat, it insulates you.”

Other possible materials are polyester, nylon or polypropylene, said Clark, or basically, any synthetic material that allows the sweat to pass through. 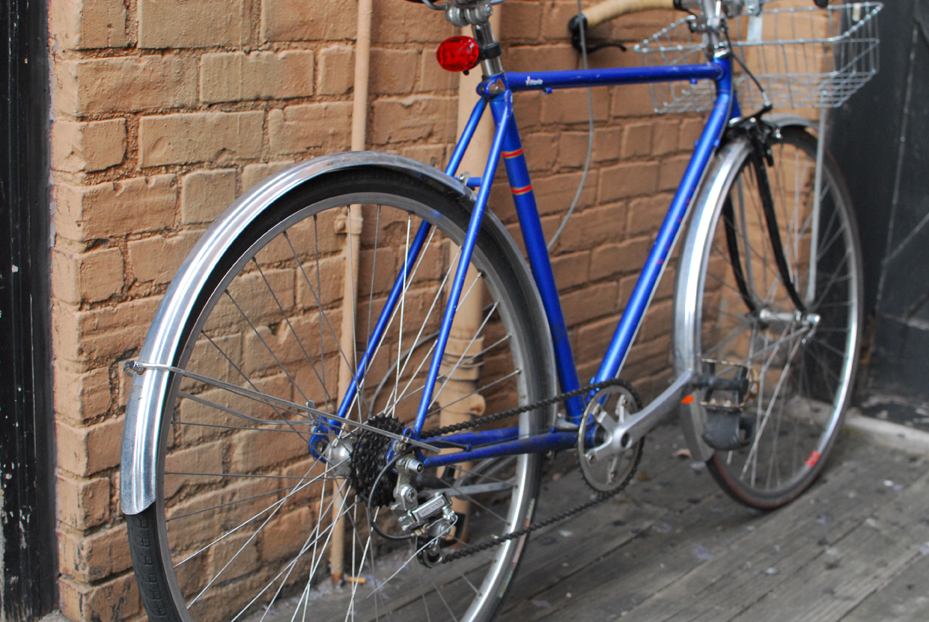 Biking while wet is bad enough. Biking while wet, dirty, and full of salt and motor chemicals that seep into the stagnant road slush is just unhealthy. You don’t want that stuff on you, and fenders are a guaranteed way to keep it that way. It’s also a simple way to avoid what Giannobile calls “cold buns.”

When your tires cut through the snow, just like in rain, some of that precipitation is carried up by the tire and thrown on your backside, or the bottom of your pants if it’s the front wheel. Your pants are the first to feel the splash, and in below freezing temperatures, you’re in for a very uncomfortable ride. 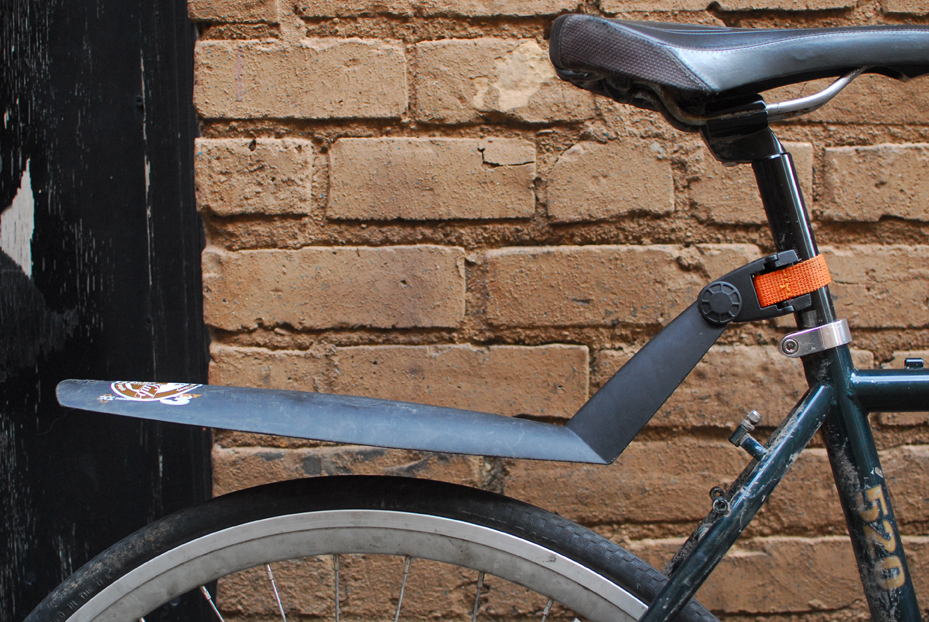 Installing permanent fenders may require a little money and time, but if you’re looking for something cheap and quick, most bike shops will carry attachable plastic fenders that strap right onto your bike, said Giannobile, and for only around $15.

If you do install fenders, just remember to check for ice and snow build up, said Giannobile, or it can pack in between your wheels and the fender, creating unneeded friction that will slow you down.

Anyone who had to drive, bike or even walk during last week’s early morning flash freeze knows that slippery conditions here are no joke. Even light snow can get packed down by traffic, causing slick patches of ice where you least expect it. Particularly, if it’s snowing out or icy, take your turns extra slowly, said Giannobile. 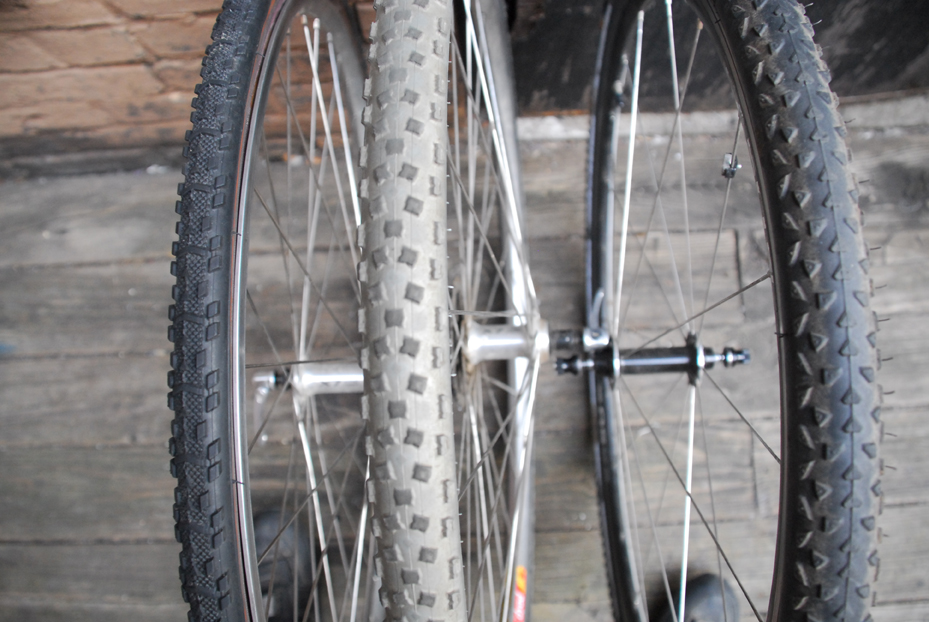 Most road bikes are equipped with tires meant to offer the least amount of resistance in exchange for speed, which is exactly what you don’t want during the winter, when traction is your best friend. Now is the time you should be switching out your slick road tires for some hefty, treaded ones.

Basic mountain bikes or hybrids (between a mountain bike and a road bike) work great for winter, and if you really want to decrease your chances of falling, use studded tires, said Clark. 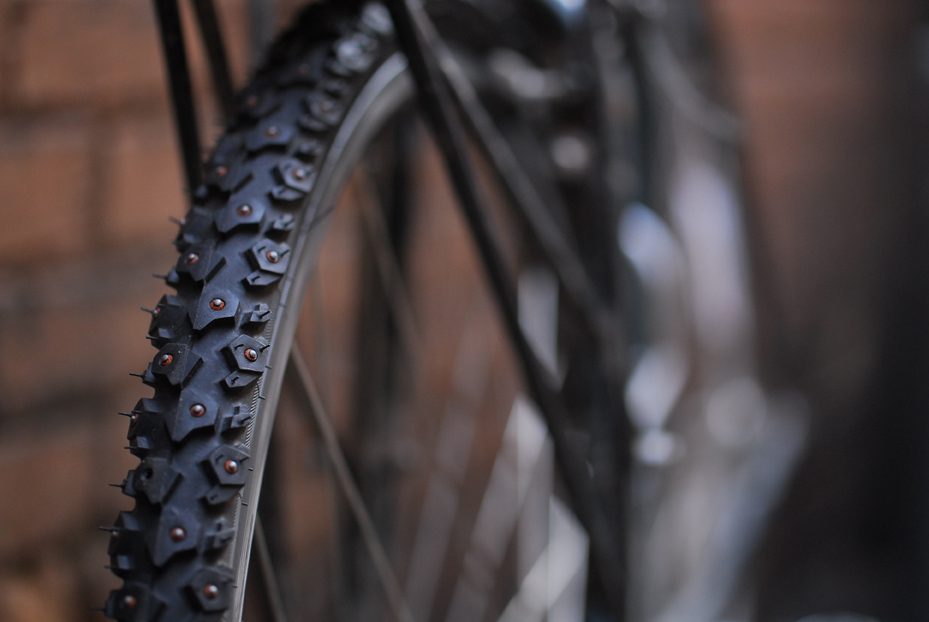 “Studded tires… cut through snow and stick to ice,” said Giannobile. “A normal tire will hit a patch of ice and just go flying.”

They won’t always work, according to both Clark and Giannobile, but they’re far more effective than anything else.

You can find studded tires at almost any bike shop, but if you’re having trouble, you can also check out Minneapolis based bike gear company 45NRTH, who specializes in winter biking equipment. 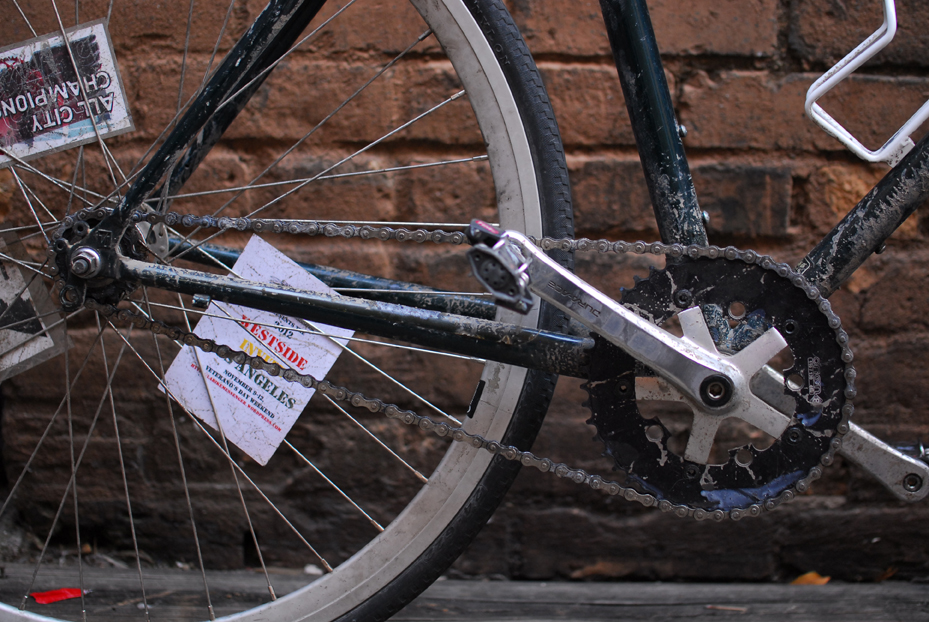 During the winter, the roads are full of salt and sand, which are significantly damaging for a bicycle. Salt speeds up oxidization, rusting your bike faster, and the sand will get in the nooks and crannies and grind away at all the moving parts. I ruined my chain, gears, bottom bracket and brakes on my bike last year because I never bothered washing any of it off.

No, you don’t have to give your bike a full fledged wash after every ride, but try and wipe it down the best you can when you can. At least wipe the chain off after each ride, suggests Giannobile, and a lot of that just has to do with discipline.

“It’s way easier to clean it sooner than later. If you let it sit, it’s just going to be way worse,” said Giannobile, “but if you spend five minutes right away, you’re not going to have to worry about it.” 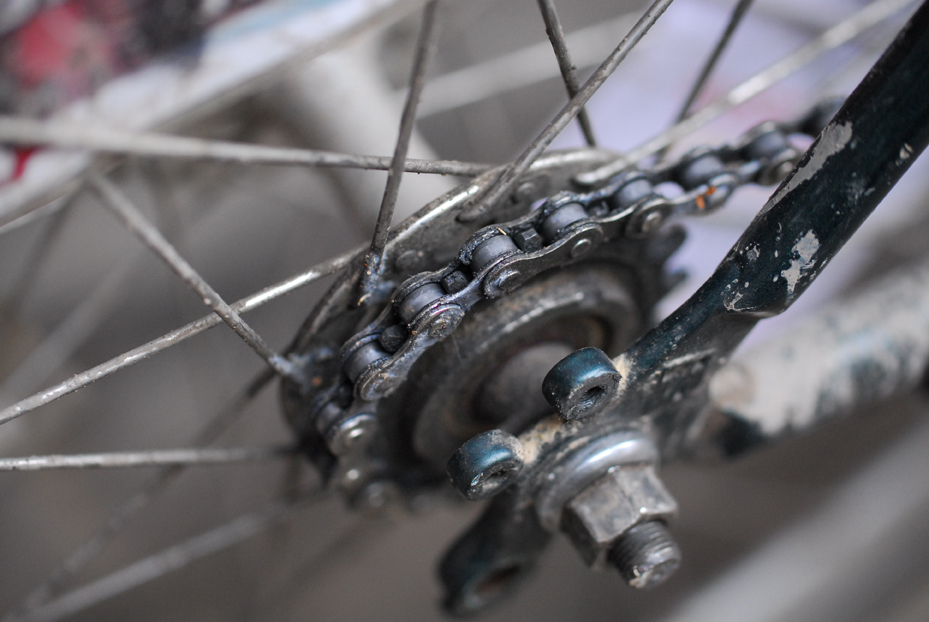 If cleaning is an issue, you can make the task easier by riding a single speed or fixed-gear bike, said Daniel Murphy, Giannobile’s roommate and another year-round biker of several years (as well as the photographer behind these fantastic shots). With single speed or fixed-gear bikes, there are only two cogs: the front one and the back one. Less parts to clean, easier to maintain, and less places for gunk to get into, said Murphy.

Giannobile still rides his multi-geared bike during the winter, so he’ll take a pitcher of warm water and pour it over his gears. Afterwards, he’ll spray it down with bike lube (not WD40, which collects dirt more). Clark even suggests using hot wax to protect your bike, which you can get done for you at a bike shop.

Even if you clean it every day, winter riding is going to damage your bike. There’s no avoiding it. So, don’t ride your new, sparkly bike, or you’re going to be saddened by what happens, said Giannobile.

It’s easy to find an inexpensive, yet working bike off Craigslist, said Murphy. It’s better than ruining your baby.

“The trail is plowed whenever it snows, and often it’s clear even before some side streets,” she wrote.

Clark suggested avoiding the residential streets whenever you can. “Probably the best routes for winter bicycling, in lousy weather, are busier streets,” he said, and with bike lanes mostly under snow as well, you need to be more assertive in being visible.

Take the full lane when you need to, said Clark, and wear reflective gear and bright colors.

10. Finally, have some mental fortitude 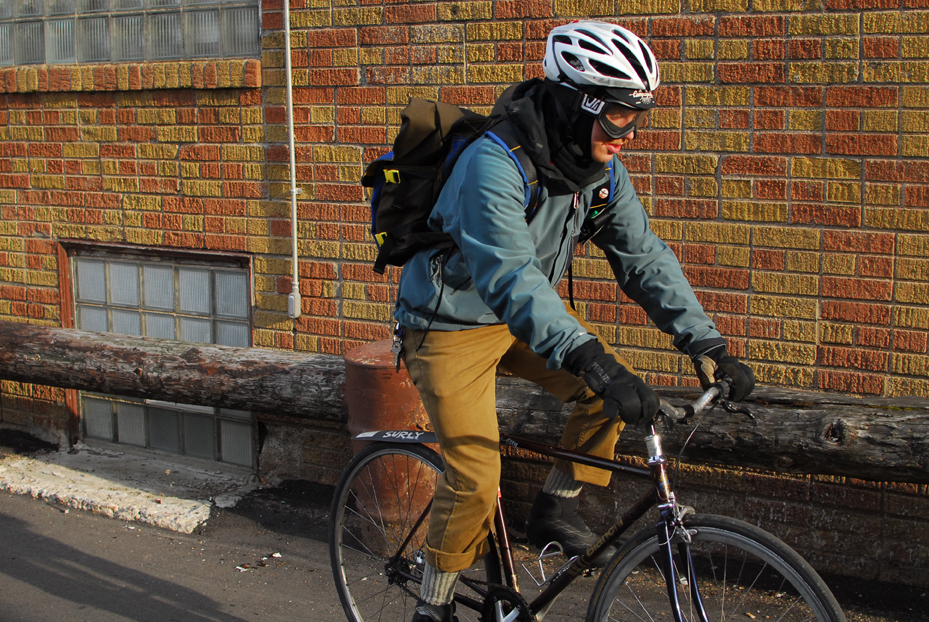 Biking during the winter isn’t a trade-up. You should know that you’re in for biking that is simply more challenging, but that doesn’t mean you can’t enjoy yourself while doing it. If anything, find comfort in the fact that you’re braving one of the nation’s most respected winter spots and surviving it.

You get tougher to the cold, said Clark, and you’ll acclimate to the changing conditions.

Giannobile and Murphy said the best way to approach it is to just have fun with it.

“Don’t think of it as a burden or a chore, because then it’ll be awful the entire time,” said Giannobile. “Of course it’s cold, it’s winter. There’s not really much you can do to change about it. You’re just going to have to let it go.”