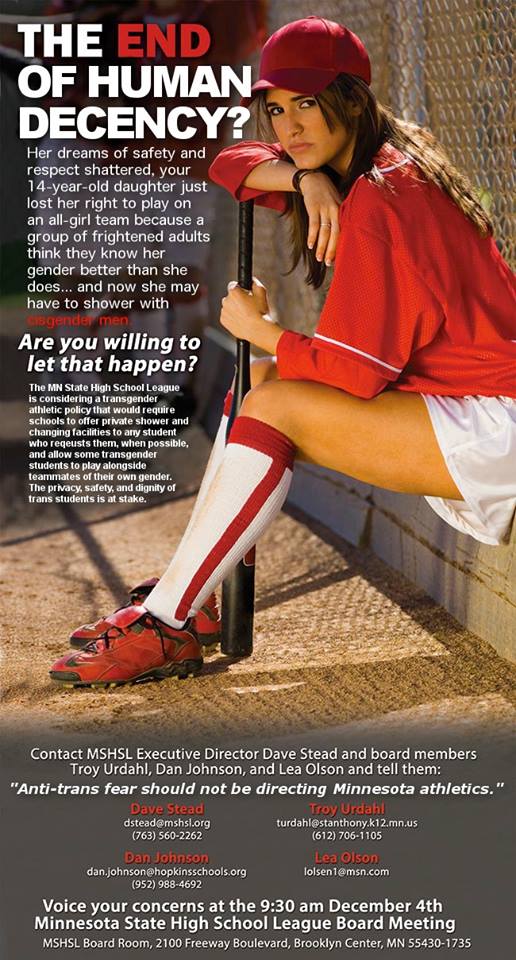 Just before the Minnesota State High School League’s proposed vote in early October on a trans-inclusive high school athletics policy, support poured in for transgender students. Minneapolis Mayor Betsy Hodges, council members Barbara Johnson and Elizabeth Glidden, Sen. Scott Dibble, the president of Minnesota’s pro-soccer club Minnesota United, the Star Tribune Editorial Board, and the state’s teachers union Education Minnesota all wrote statements in support of transgender students.The MSHSL voted to table the policy and instead take up a vote on the issue on Thursday, Dec. 4. In the past few weeks, more support has poured in for the policy and for transgender students.

The Minneapolis Commission on Civil Rights pass a resolution in support of the policy on Nov. 17.

Writing in the Star Tribune, Peggy Brenden, the first girl to play on a boys’ team in Minnesota, noted that the same arguments being used to oppose the trans-inclusive policy were used to oppose equal opportunities for girls.

I experienced an unsettling flashback as I read the full-page ad run by Child Protection League Action (CPLA) in this past Sunday’s Star Tribune. The purpose of the ad was to rally citizens to attend Thursday’s Minnesota State High School League (MSHSL) meeting, where the issue of transgender student participation in athletics will be addressed. The CPLA forecasts a dim future for “student bodily privacy, safety, dignity and the future of athletics” if transgender students are allowed to “choose their gender team.”

Though I am not transgender, I may have some helpful insights. Some 40 years ago, I was the first girl in Minnesota to participate on a boys’ interscholastic athletic team — the tennis team at St. Cloud Tech. Fears about “bodily privacy, safety, dignity and the future of athletics” were also rampant back in 1972 when I put on the Tech Tiger warm-up and stepped out onto the court…
The CPLA folks fear that the MSHSL will allow transgender athletes to participate on the team that is consistent with their gender identity. In big, bold letters their ad asks: “Are you willing to let this happen?”

I certainly hope we are.

John Jasper Jr., sports reporter for the Winona Daily News, penned a commentary in support of transgender youth on Tuesday.

The Minnesota State High School League Board of Directors has a second chance to do the right thing Thursday morning.

The first action item on the agenda of the board’s quarterly meeting is a vote on a transgender participation policy. Two months ago, voting was tabled to allow further study of the policy, which would give schools a framework for determining transgender student eligibility. Student athletes would be allowed to participate in athletics for the gender team they feel matches their gender-related identity.

Duluth News Tribune opinion writer Joseph Legueri backed the policy earlier this month and chided the MSHSL for backing down to the MNCPL:

The MSHSL did not.

As a Catholic school, we know the importance of breaking down systems of oppression and fighting the marginalization of historically underrepresented groups. No matter how small a group, no community deserves to be subjected to exclusion, harassment, or violence. By not taking a stand for trans* students and their rights, you are condoning trans*phobia.

Denying people the chance to play their favorite sport just because they associate with a different gender is not fair or reasonable. Students can feel victimised because they associate as a transgender. Not being able to be yourself is severely detrimental to a person’s health and confidence. Many transgender students struggle to fit in with their fellow peers. Many school administrators agree the new guidelines are a good way for students to open up for their peers and not be scared to be themselves. The new guidelines would fill the gap between associated gender and sports by allowing some transgender students to play on sport teams of the gender they define themselves as.