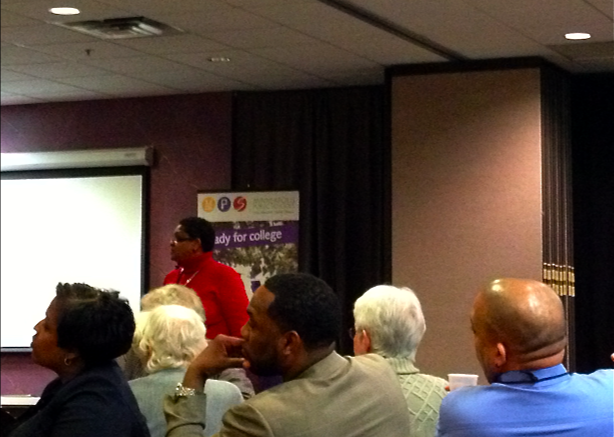 What’s an average day like in the shoes of Superintendent Bernadeia Johnson? At the February 4 Soup with the Supe event at the Minneapolis Park and Recreation Board, about 150 people learned that Johnson juggles meetings and school visits day-to-day. They also told the superintendent about their issues and experiences with Minneapolis Public Schools over a light dinner of soup, sandwiches and cookies. A handful of translators and a fluid passing of the mic to anyone wanting to speak made for an inviting and successful conversation.

One parent, Al Flowers raised concerns about re-iterating the importance of black culture in classrooms as well as the aftermath of the recent racial incident at Washburn High School. Due to MPS student confidentiality policies, Flowers didn’t gain much information about how students involved in the incident were punished.

Johnson suggested bringing in influential community members to speak to students about black history and their experiences.

A Jefferson Elementary teacher raised concerns about problems connected to homeless and highly mobile students. In this teacher’s classroom there are two problems — an unbalanced student-teacher ratio with 32 first graders; in addition, 10 percent of the entire school’s homeless and highly mobile population is in her classroom. Jefferson’s 1.8 social workers can’t deal with the hassle, nor can the teachers.

“We try to figure out how to partner with Hennepin County and community organizations,” Johnson said. “One of the things we talk about is placing students so there’s not more of a burden in one school than there is another.”

Johnson empathized with parents who wanted to know how to communicate with teachers who, for whatever reason, don’t get along with their son or daughter.

“That’s even more hurtful, Johnson said. “I’ve been in the car crying because I knew a teacher didn’t like my daughter.”

She offered advice that she’s put into practice before — confronting that teacher and asking them to lend their attention to the student’s best interest.

Johnson added, “Maybe there needs to be some mediations and conversations to bring people back.”

In reference to a security guard at Patrick Henry being too rough with students, Johnson advised parents to report him to MPS, since warnings from the school have had no effect.

Other attendees lightened the conversation asking how — in the eyes of the school district — to be an ideal parent. The best way Johnson said was to make sure students come to school.

“Kindergarten and high five attendance is the worst, because parents view it as optional or daycare,” Johnson added.

Missing more than eight days, she said, disrupts sequential learning in classes like math. Incorporating 30 minutes of reading as well as talking to students — even middle schoolers — about what they learned, Johnson said, helps a great deal. Parents were excited to learn that MPS has created an HR position for the purpose of scouting and investigating the shortage of teachers of color.