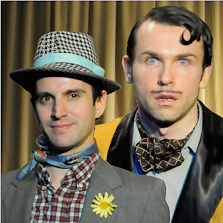 Super Spectacular!: To Opera with Love by the Donovan Ensemble

Marketable concept, yes? Is a review even necessary? Is it competent? Yes, maybe, and hell yes.

Here’s a show that – the vast bulk of the comedy seems to come from the juxtaposition of opera with pop music, done to great effect – but really, it’s just one of those Goldilocks plays, that seems to hit exactly that right combination of elements. Between the song parodies, the clowning in the frame story, the vaudeville-esque back-and-forth between the duo – one moment flows seamlessly into another, and yes, there’s something for everyone here.

The jokes themselves aren’t terribly innovative – that’s not the point, they’re fairly stock, it’s a classic running-in-and-out swapping wigs and one-liners sort of affair – but it’s incredibly well-executed, and there’s just an insane amount of performance polish on this thing. It’s slick, man, hella slick for a Fringe show.

(If I have a complaint, it’s a purely technical one – in the KC venue I saw them perform in, I lost several of the lyrics under the music – which is a major issue in a show where so much of the comedy is generated by said lyrics. They either need to be miked or the sound levels need to come down.)

But, yes – one of those shows that was sufficiently light, and sufficiently pleasurable, that I don’t find myself having much to say in the way of analysis. It’s fun, it’ll probably be a hit, and it deserves to be.