It was a major oversight. When Carol and I were drafting our wedding vows, I didn’t think to insert a clause about Chinese buffets. As a result, Carol steadfastly refuses to accompany me on my all-you-can-eat expeditions, and there is not much I can do about it.

The evolution of the Chinese buffet is a fascinating restaurant industry phenomenon. First came the basic model, when Chinese restaurants started offering an all-you-can-eat buffet: typically chow mein, fried rice, egg foo young, and maybe a few entrees such as beef with broccoli or sesame chicken. 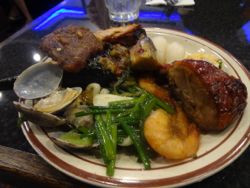 Then came the super buffet, with dozens of dishes, but basically all still Chinese. But in recent years, the Chinese buffet has set out on a path towards world domination, morphing from super to mega, and offering not just Chinese food, but also a salad bar, sushi, and the cooked-to-order hibachi/teppanyaki/Mongolian grill station, plus such all American (i.e., Old Country Buffet) favorites as pizza, fried chicken and mashed potatoes and gravy.

Super Moon at 6445 Wayzata Blvd. in St. Louis Park is the biggest mega buffet I have seen yet, with easily over 100 different food items on offer at any given time. It certainly looks more impressive than the usual strip mall buffet, with a pair of enormous concrete dragons that greet you in the parking lot, and a koi pond just inside the door. 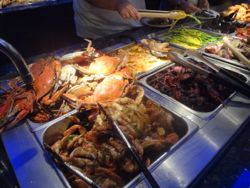 There’s also full salad bar, mostly American but with a few odd items like kimchi, mussels and shrimp, plus red and orange Jell-o and lots of prepared salads, heavy on the mayo – or was that Miracle Whip?

I didn’t even get around to trying the Mongolian/hibachi/teppanyaki grill, where you pile a plate high with your choice of raw lamb, beef, pork, shrimp, turkey, chicken or baby octopus plus assorted veggies and noodles, and then a chef stir-fries it for you.

It’s a pretty impressive spread. But how good was it?

Pretty mediocre, actually. There were a few items that were pretty tasty, such as the meaty barbecued ribs. But most of it was about what you would expect from an all-you-can eat steam table buffet, just more of it. The dim sum were rubbery, the roast duck was dry, the roast chicken too salty.

And the sushi was a cheap imitation of the good stuff. The sushi bar featured about a dozen different kinds of sushi. On my evening visit, there were one or two varieties that were actually topped with fish or what might have been clam (albeit thinly sliced and not very flavorful).

When I visited at lunchtime there were none – everything was a day-glo concoction of fake crab, cream cheese, avocado,  brightly colored fish roe, etc., with pink and brown sauces applied over the top with a squeeze bottle. 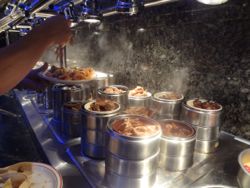 One thing Super Moon offers that I have never seen before is dim sum – a whole section devoted to little stackable steamer baskets filled with steamed dumplings, breads and assorted meats and byproducts. Upon closer inspection and tasting, these were mostly the stuff that most Americans won’t eat: chicken feet, pork knuckles, fatty pork belly, beef tripe, etc., or else steamed buns filled with sweet paste. There were a few of the more popular dim sum items, such as pork dumplings and shrimp dumplings, but these were rubbery and flavorless.

Do I sound a little grumpy? That’s how I feel. Dining at Super Moon felt like eating in a feedlot. You wait in line to pay in advance and are led to your table, where you place your receipt face up on your table to save your spot while you load up at the buffet. At one point, when I returned to my table with a second helping, I was informed that my place was needed to complete the seating for a party of 10, and was politely asked to move to another table.

It’s a crowded, not very relaxed way to dine.

Only later did it hit me: for the cost of dining at Super Moon, I could have had almost any entree on the menu, in elegant surroundings, at the first rate Little Szechuan, only a few blocks away in the Shops at West End (5377 West 16th Street Saint Louis Park.)

And Carol would almost certainly have joined me.