Emily Moore Harris and Sheela Namakkal made a big splash even before opening Cake Eater Bakery & Café in the former Clicquot Club space in South Minneapolis’s Seward neighborhood. Sheela had built something of a reputation around Miel y Leche, a catering business that sold to individuals for weddings, birthdays, office parties, and to select venues around town, including the Modern and Quixotic Cafe. Emily was well-known up and down Lyndale Ave., having worked at Caffeto, the Wedge, Ecopolitan, and Treehouse Records. Then, a few months prior to opening their business in April 2010, the vivacious duo began introducing themselves—and their delectable wares—to Seward residents at various events, including a benefit for the Seward Neighborhood Group, and the first annual Franklin Frolic, both at Welna II Hardware.

On opening day, throngs of customers filled the shop. Overflow spilled out onto the sidewalk. Those who made it through the line were greeted by a vast array of cupcakes, including the Elvis, made of banana cake, peanut butter-marshmallow mousse, and topped by a strip of bacon. It was a smashing start for a business housed in a tiny building, tucked away on a mostly residential street. The quiet location on East 25th Street, Emily points out, was part of Cake Eater’s charm, but also contributed to its undoing.

However, it was more than location that was challenging for the two partners. It became clear, fairly quickly, that the business model they had created was unsustainable. Especially problematic, says Emily, was the decision to run two businesses—an all-day café and a catering business—out of the same space. This required having a huge number of ingredients on hand, including for cupcakes, Cake Eater’s original trademark. It also meant that on some days the demand for catering was so great that the retail shelves were bare, with nothing to offer customers but Intelligentsia Coffee.

By August, three staff people had left, all of their own accord. And in January, Sheela, the cupcake guru, departed for Chicago’s Bleeding Heart Bakery, with recipes in hand. At that point, Emily and her husband, Taylor Harris—who bought out Namakkal’s share to become co-owner—opted not to shut down, but to regroup. They cut back to just a few types of cupcakes each day, added bagels and savory breakfast items—including omelets and biscuits and gravy—then soups, and finally, a few weeks ago, a small lunch menu. 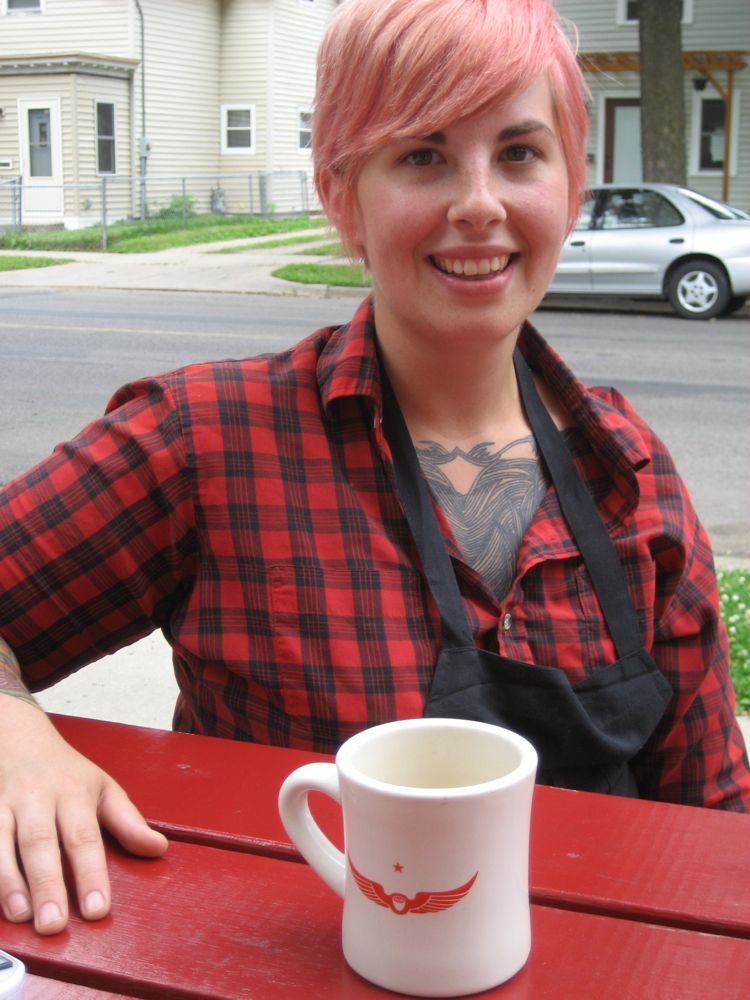 Still, there were a number of factors working against them. For one, they had invested most of their life savings when they opened the business. Moving in a new, what Emily considers a smarter direction, was the equivalent of starting all over again, tapping the couple’s by-then-meager resources to the max. Then there were rising coffee and food costs, coupled with the awareness that many customers wouldn’t be able to afford Cake Eater’s prices if they went up accordingly. Other complications were tied to making a change—how to get the word out when there was no money for advertising, pleasing some customers with the new menu, but losing others. Finally, there were family matters that were difficult to attend to when owning a business and working a 72-hour week. Emily’s grandmother recently died of cancer. A 25-year-old brother has also been diagnosed with the disease. Her family lives half-way around the country, in Vermont.

Ultimately, the couple decided they just couldn’t make a go of it. At the end of June they announced they were closing the business. This Sunday, July 10th, will be Cake Eater’s last day. Emily looks forward to having time to devote to her creative pursuits, including a band that’s forming, and to no longer owning a business. Taylor will continue teaching geography classes at Northeast Middle School.

Emily tears up when she talks about how supportive and enthusiastic neighborhood residents and community organizations—Redesign, Seward Neighborhood Group, and Seward Civic & Commerce Association—have been throughout. What she’ll miss most, she says, are seeing her regular customers, many of whom have become good friends, on a daily basis.

To thank customers and the community, there will be an open house, featuring free snacks, coffee, and iced tea on Sunday from 10 a.m. to 4 p.m. Cake Eater is located at 2929 E. 25th Street.