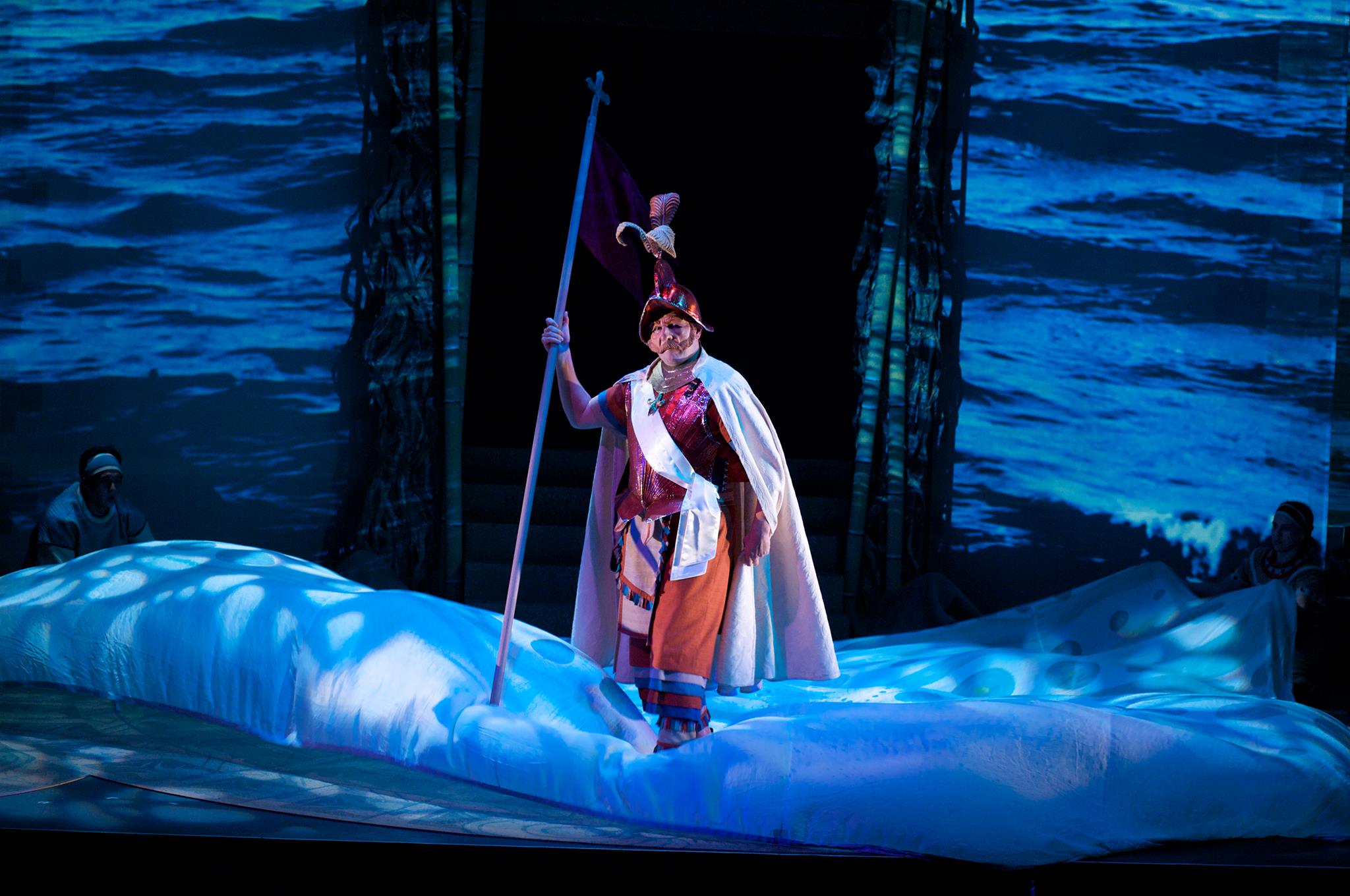 I didn’t look at the program before The Sun Serpent began on Saturday, March 8 at Mixed Blood Theatre, but at the end I could have sworn there were at least six people in the cast. It turned out that only three actors received the audience’s fervent praise at curtain call: Andrés Alcalå, Adrian Hernandez and Andréa Morales. The three-person cast embody the arrival of Cortés in modern day Mexico and the chaotic stew of clashing cultures that followed. It’s a ridiculously huge task. And aside from a few distractions the production not only pulls it off, but depicts a surprisingly complex period of history rather than the expected story of conquerers and the conquered.

Over the course of the show, the actors speak in three different languages representing the Spaniards, Aztec, and other native peoples. Subtitles aid those of us not so well versed in the languages and add a whole other dimension of the distance between cultures and creates an incredible sense of uniqueness about the production a. The illusion of three people representing entire armies is helped by truly outstanding costuming. Masks, headdresses, cloaks, talismans, weapons and armor all help tell the story of two brothers who see Cortés’ ships land and are pulled in two different directions by the god-like strangers. It sends the younger of the two on an epic journey across a country already at odds before the Spanish arrived and entered the conflict.

A vital line at the end of the performance stresses that the confrontation between Europe and the Americas was not a quick fight with a winner and a loser, but vastly nuanced years that ultimately gave rise to what became Mexico and its new, composite culture. It’s a refreshing and realistic statement about the conflict that makes a world of difference from the simplified version usually glossed over in high school. And yet the nuance of the material is frequently overwhelmed by the broadly acted, frequently one dimensional characters. The two brothers grappling with who to be in their violently changing world are the only two with much emotional range. The Aztec king Moctezuma, Cortés, soldiers and other natives the brothers encounter are all loud, single notes. And while I did find it distracting to the point of irritating at times, in no way does it diminish my feeling that everyone should try to see it. (You don’t even have to pay for tickets—you can pay for reserved tickets online or drop by the theater to take your chances on free general admission.) The show runs about 90 minutes with no intermission, I suspect that adding any more emotional depth to the multitude of characters would just be overwhelming and unwelcome.

Even with the distractions of so many background characters the production succeeds in many ways. The technical aspects stand out in my mind as amazing—physically it spans the whole width of the theater, varying in depth thanks to ceiling high panels that are either transparent or opaque, depending on which of the many, frequently changing settings are projected on them. The aforementioned costumes and the use of different kinds of music with the different languages spoken are impressive. It’s truly absorbing, and an excellent lesson in Latino culture and history.