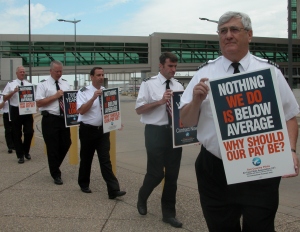 Sun Country pilots recognize the importance of staying on schedule. They want management to bring that same sense of urgency to negotiations on a new contract with their union, the Air Line Pilots Association. Pilots picketed recently outside Terminal 2 at Minneapolis St. Paul International Airport, raising awareness about the slow pace of negotiations with Sun Country – and signaling their frustration to the company about being among the nation’s lowest-paid pilots of Boeing 737 aircraft.

“Compensation is a major issue for us,” said Jake Yockers, a spokesperson for Sun Country’s ALPA bargaining unit.

The pilots have not seen their wage rates increase since 2005, when they agreed to a five-year contract that provided Sun Country, which entered bankruptcy in 2008, with the stability the company said it needed.

The 2005 contract remains in place today, as negotiations on a new contract, which began before the last one became amendable in March 2010, have been slow going.

Pilots say the airline is making money now, and they are looking to bring their compensation back in line with industry standards. Their wages, Yockers said, are roughly half of those earned by pilots at Southwest Airlines, the highest-paid 737 pilots in the country.

“We’ve always helped the company out,” said Yockers, a 22-year veteran pilot at Sun Country. “We love what we do. We love our company. We’re members of the community.

“We’ve had our tough times here, and pilots have always been there for the company. We’re not looking for top-tier pay. We just want a fair wage for what we do.”