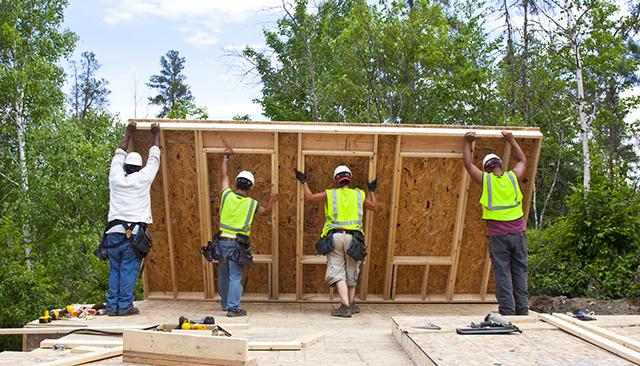 This summer, students will get real-life construction experience using recycled materials, while replacing a cabin at the center that burned down three years ago. (Photo by John Ratzloff)

William Moreland experienced a lot of firsts as he wrapped up his studies at Summit Academy OIC, a community-based vocational training and job placement program in North Minneapolis.

Along with learning about construction math, building materials and power tools, the 36-year-old Texas-native became one of the first academy graduates to build a cabin in the Boundary Waters for renowned polar explorer Will Steger. Moreland and his classmates started building the cabin in late June at the Steger Wilderness Center in Ely, Minn.

“I got really inspired being able to go meet someone like Will Steger,” Moreland said, who visited the Boundary Waters for the first time. “I look at it as development and personal empowerment. It’s just a real exciting opportunity that I’ll be able to talk about for years.”

The project is part of a new partnership between the Will Steger Foundation and Summit Academy. This summer, students will get real-life construction experience using recycled materials, while replacing a cabin at the center that burned down three years ago.

Steger and Louis King II, the founder of Summit Academy, hatched the idea about eight years ago while teaming up for H.I.R.E. Minnesota, a program aimed at ensuring that public investments in infrastructure and renewable energy help transition people from poverty and reduce racial disparities. For the cabin project, Steger provided a week of room-and-board and building materials, while the students gave their carpentry expertise and labor.

“Building little cabins in the wilderness is just a great experience,” Steger said. “People want a job, they don’t want to live in poverty. They want to work. What it’s really about for myself is I have a real commitment to the inner city. It’s about getting opportunities here.”

Moreland, who lives in Minneapolis, used to drill oil rigs. When he became dissatisfied with his job, he started looking for new career opportunities. That’s when his brother told him about the Pre-Apprentice Carpentry Program at Summit Academy.

The program costs $5,400, but tuition is generally paid for through a combination of federal financial aid, donations and foundation grants, according to Steve Shedivy, director of marketing at Summit Academy. Students don’t have out-of-pocket costs or loans to pay back.

Typically, students using the program are low-income adults who are unemployed or under-employed, Shedivy said. They must have a minimum of a high school degree or GED and pass an entrance exam. Students are selected based on interviews and academic performance.

The selection process can be stringent, Shedivy added.

Upon graduation, students receive an undergraduate certificate and have the skills to work at union shops as pre-apprentices, said Jim Jordan, operations supervisor in the carpentry department at Summit Academy. Jordan is leading the cabin project.

Moreland and five other students built the cabin’s 16-by-16-foot structure during the weeklong trip, starting June 15. A second group of students will return in early July to complete the interior and exterior. The cabin will house up to two visitors at the center, Steger said. 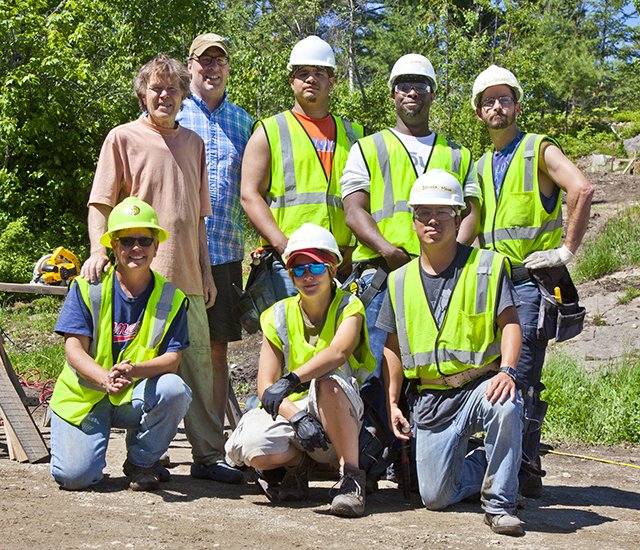 Will Steger, second row far left, and Summit Academy students pose for a photo at the Steger Wilderness Center in Ely, Minn. (Photo by John Ratzloff)

Jess Hill, 23, of Mounds View, also joined Moreland for the first cabin-building trip. Hill grew up camping in the Boundary Waters. She also took on minor building projects as a girl, making plant box and shingles with her family. Hill said she jumped on the chance to work with Steger — who she admires for his dog-sledding expeditions across Antarctica.

“I was right on top of it,” Hill said. “When I heard that we were building a cabin for someone as big as Will Steger, I wanted to go.”

After graduating from Summit Academy, Hill hopes to find a job with a union contractor, learn as much as she can from others, and eventually become a foreman.

Moreland wants to find a job in union carpentry, too.

“I want to gain work experience,” he said. “I want to build a reputation and move forward in this career. I really want to make it work for me. I’m just going to own it, do it, and teach others.”

Summit had a 71 percent job placement rate for students who completed the pre-apprentice program between 2012 and 2013, according to the program’s website.

Steger said he plans to have more building projects for Summit Academy students in the future.

“It’s a really neat experience,” he said. “The friendships you build here are really important. I think some of these people will probably stay in touch too.”