July means many things.  The kids are off, the weather is hot, and somewhere between those two facts you can hope the lawn is being mowed regularly.  But for those of us who are into economic stats, July is the start of a new quarter – the sleepiest quarter of the year, despite a tremendous number of summer jobs.  Summertime, and the livin’ is easy.

It’s a good time to check in and see how we’ve done in 2011 so far and where we think it’ll go from here.  The short answer is “Meh?” but the long answer is a much more definitive, “Meh, don’t expect much”.  I’ll explain …

Since the start of this phase of the Managed Depression in 2008 the key to watch has always been the 4-week average of initial unemployment claims.  This is real-time data that comes in regularly, smoothed out a bit by averaging – and much more current than the stuff that takes time to compile such as Gross Domestic Product (GDP).  That’s the real economic “bottom line”, fudgy as it is at times.  However, we won’t see GDP figures for the second quarter (April-June) until later this month.

We can guess how it’ll go and how the rest of the year is going to look.  Below is a chart from our old friends at the St Louis Federal Reserve, a data junkie’s paradise.  I chose to update this data that I present every quarter with the latest thing the stock market is fretting over, namely the ISM Manufacturing Index.  The latter is a survey of activity among manufacturers, normalized so that anything above 50 signals growth.  The two figures have an interesting relationship, shown here since 2009: 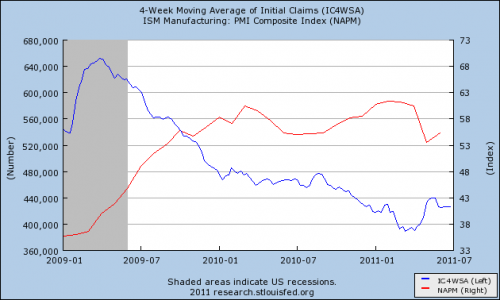 You can see that there is a very strong inverse relationship between the health of the manufacturing sector and unemployment claims.  Previously, I’ve established the strong relation between unemployment claims and everything else, including consumer spending and home prices.  That’s a big “Duh!” since people need jobs to have money which they can spend.  But remember that in the boomiest times of the 1990s and 2000s people were far more likely to talk about investments and housing prices as a driver of the economy, not work.  What changed is that our economy is now much more closely tied to reality – and our leadership has been incapable of mastering that reality.

The ISM Manufacturing index is one of the latest worries on Wall Street.  As we can see, it is not exactly optimistic lately.  The strong correlation above shows that the Initial Claims data is still the best real-time way to monitor how things are going to go as more data is released.  It’s been stuck at about 430k per week for most of 2011, a number that signals neither strong growth nor a worsening Depression.  Staying even like this is what our “Waiting for Godot” economy is all about.

Note how strongly it all goes back to manufacturing, however.  That’s the one sector of the economy that stands out among all the others at this point.  When things are going well in manufacturing there are jobs being created and the whole economy is lifted.  You will continue to hear more and more about manufacturing and the jobs it creates through the rest of this year.  That chatter will probably be met with even more inaction as no one in power has yet to talk about fundamental restructuring of the economy in a way that will create the needed manufacturing jobs.

What can we expect through the rest of the year?  The second quarter GDP number will probably come in right around the number for the first quarter, which as a net grown of 1.9%.  If it’s lower than that we will see panic because it will signal a weakening economy, and that is a very real possibility.  More likely it will be very close to that number, as predicted by the very flat Initial Claims data.  That means that the doldrums of summer will be reflected in the economy, at least as long as there is no sovereign (national) debt crisis either here or in Europe.

That is what we can expect.  If it changes you’ll see it in the Initial Claims numbers before anything else.  Keep your fingers crossed, but temper any optimism with the realization that our leadership is far more concerned with pointless posturing and games than it is with taking simple steps to get us out of the doldrums.