Recently a friend who happens to be a farmer asked, “When did you become so anti-farmer?”

After my initial surprise and denial, and later, after subsequently rolling through the countryside, I began to realize how my comments and rants could be taken in that manner. My growing up as a child and teenager was in a different era, when having a thick thatch of grass growing where water could create rills of erosion in a field was not only expected, but common. Also common was leaving a swath of anchoring vegetation along riverine embankments. I can also remember my father’s concern when Earl Butz, as Secretary of Agriculture, began preaching his “fence row to fence row” philosophy.

“That will ruin farming,” my father said. He meant the land, although it has also altered farming into a Catch 22 cash chase.

Realize, please, that my father and I had many rifts and disagreements, politically and otherwise. Despite that, I grew to firmly respect his attention to real conservation farming practices as well as his trepidation on the Butz preamble.

My father lived long enough to watch as neighboring farms grew quite large over the hills of northeast Missouri where grass and grazing was a better ecological fit. He watched as abandoned farmsteads were leveled, burned and the ashes buried, and he watched as hedge rows were dozed along with tree lines and windbreaks. Fences were pulled, wires rolled, and posts, mainly hedge, burned. Forty acre fields became 80’s, and 80’s 160’s, causing him to sadly shake his head. Folks back in my home country now call this “Minnesota farming.”

Yes, this is precisely the treatment of the land we see all around us. Industrial road grading equipment is used to extract glacial rocks from fields (which are then stored for sale in faraway cities to landscapers), and groves and farmsteads dozed and burned. Sod and prairie grasses, CRP land … all being plowed. Painstaking efforts are made with a blade to cut just enough of a two-foot deep furrow through fields to aid in the rapid flush of water. In many cases these furrows are too shallow to qualify as a legal ditch, meaning a mandate for buffer strips, and once cut, are carefully skirted by tillage equipment and planters. Cattails are allowed to grow … until hit by contact killing Roundup.

In fields already tiled, new and more efficient patterned tile systems are being installed. Although the technology is readily available that would allow farmers better water table management, the devices have been a tough sell despite years of positive presentations at many winter meetings. At least one watershed project had staffers basically begging farmers and landowners for a single demonstration installation … to no avail. Flush is seemingly the norm for managing water tables, not the holding back or storage of melt nor rain.

Hilly lands that should never have been tilled stretch for miles with no regard for erosion. In wet springs and early summers, like we’re having again this year, runoff water carries tons upon tons of soil off the higher land. We passed a field with corn nearly two feet tall in the valleys with spindly, four-to-six inch stalks poking up on the rest of the acres. “That’s where all the good soil has washed off to,” said Rebecca. Typically, 20 percent of a field has the healthy stalks. The rest? Will it qualify for USDA emergency subsidies?

Indeed, an observer can easily see the change in soil color and tilth … light tans compared to a rich darkness … in field after field, mile after mile. A keen observer can also tell that many are ignoring either the advice or statutes that call for grassed buffer strips along artificial drainage ditches, and any thought of a grass “waterway” would be considered absurd! Most of us know by now that 99 percent of the wetlands are drained, with a like percentage of native prairie tilled. Where is the rage you see with the distant Brazilian rain forest?

Driving through the rural byways in the winter months can just be sickening with mile upon mile of “snirt” — that dirty combination of snow and dirt. Overwinter cover crops are rarely planted, and any thought of leaving stalks to hold soils in place is basically unheard of. Our food supply is threatened in that one day fields will be barren of healthy prairie dirt. Realtor’s will be challenged to barker farms with no soil left to sell.

One wonders where the crops will be grown, of how subsequent landowners and farmers will continue to “feed the world.” Have we become so selfish as farmers that we can only think of today, of mining the soil for the most cash possible with crops with little direct food value and staunch government policy support? If we’re blaming policy for the woes and goals of the tractor jockeys, then perhaps some teeth should be placed into the policy smile … a net zero erosion factor as a qualification for any USDA commodity benefits ­— mandated buffer strips on all riparian waters, including drainage ditches; grassed waterways; winter cover crops, especially following soybeans and sugar beets; an actual crop rotation that includes nitrogen fixing legumes; banning practices that threaten pollinators; and so forth.

Am I anti-farming? Or, am I simply someone concerned about a future that appears ever more ominous for a climate challenged earth that will be incredibly feeble environmentally for our children and grandchildren — indeed, for all future generations.

Am I anti-farming, or am I someone who simply wishes for the bygone ethics of conservation farming practices that promotes soil health and keep earth’s dirt in place?

Am I anti-farming, or someone who wishes to keep our people, our land and our rivers healthy, and in place for future generations. Surely this answers your question.

Glacial rocks and trees are staged for removal on recent grazing land … with the distant hill tops showing land that is probably unsuitable for good cropping.

Where’s the grass? Planting grass waterways in fields would have prevented erosive actions on millions of tons of soil just within the past several weeks. 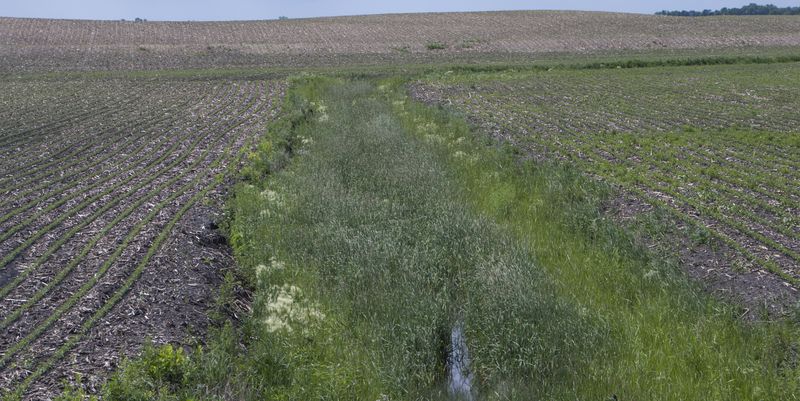 By cutting a shallow depression in the field that quickly removes water but is considered too shallow to qualify as a drainage ditch skirts the mandate of planting buffer strips. Such depressions are becoming popular in fields converted recently from grasslands. 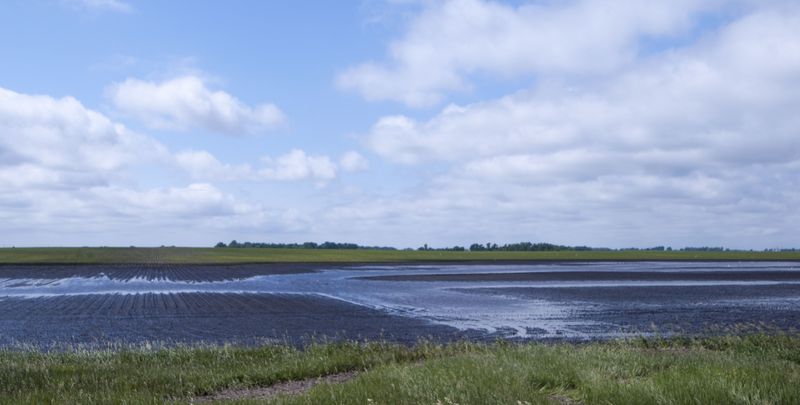 Quite common after heavy rains all around the old prairie pothole biome, where 99 percent of the wetlands and prairie are no more, are sloughs that probably should have never been drained. Planting crops in the beds of old wetlands are always a gamble, an ante covered by federal farm policy. Strategic wetlands store water, recharge aquifers, and help filter impurities before the water moves on.

An example of a healthy buffer strip found on a Chippewa County drainage ditch. Buffers protect the health of the riparian banks while filtering and slowing down runoff from crop fields.