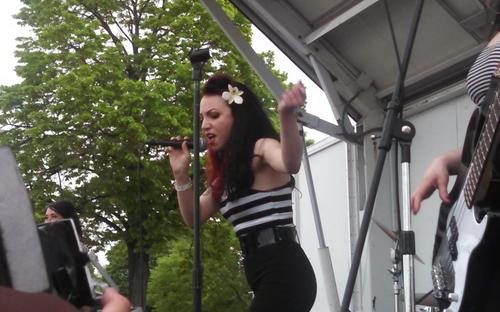 All photos by Ann Treacy

One of my favorite things about summer in the Twin Cities is an opportunity to see great music during the day. It’s great for all ages and for some of us that means no babysitter and a willing dance partner. What could be better!

My favorite nine-year-old and I started the day at the Amsterdam Bar and Grill for Koo Koo Kangaroo’s CD Release Party. They actually had two release parties at the Amsterdam; a kid-friendly party during the day and a more adult-themed gig at night. We only attended the kid-show. I was tempted to go back at night to see how the parachute portion of the gig goes when everyone is taller. Next time!

They played their old school crowd pleasers – Rollin’ in the Minivan, Dinosaurs, Unicorns R Real and my favorite Awesome Rainbows. Lots of little kids wondering what in the heck was going on. Lots of kids-at-heart dancing the Koo Koo Kangaroo moves. Everybody in a good mood after Cat Party and Super High Five.

I think the last time I saw Koo Koo Kangaroo they were playing with Frank Turner. It was fun to see them play for kids again. I noticed a few more Rocky and Bullwinkle jokes then pre-Turner days. (In case that’s not a universal reference – I mean slightly blue jokes that kids don’t get.) Although hanging out with someone from England for a few months and coming back with a song about Fanny Packs sets a certain tone immediately. (Despite speaking the same language, some terms just don’t translate well over the Atlantic.)

Koo Koo Kangaroo is without doubt one of the best opportunities for dancing; and Bryan and Neil seem earnestly interested in making sure everyone has a good time.

After a quick lunch at the Amsterdam, we headed over to the Memory Lanes Block Party. To be fair, the block party isn’t kid-focused but kids are welcome – until the show moves inside after 10:00. We were there to see L’Assassins, Frankie Teardrop and Eleganza. I had hoped to sneak in Deadstring Brothers too – but the down side of a 9 year old date is that she gets tired.

L’Assassins took the stage with gusto. You have to pay attention to a band whose sound check includes blood curdling screams. They had a following at the event. One guy dove on the ground to act as a foot ladder for lead singer Tea Ann Simpson as she got back up on stage. Yup, they have that kind of engaging jump off the stage spirit and people react to it. I heard a few folks comment – “Wow! Where have these ladies been?” They’ve been around for a while, but they are especially well suited for outdoor festivals, where they seem to get a wide exposure to a greater diversity of fans. They are hard, fast rockabilly – think The Cramps, but much cuter!

Frankie Teardrop was a new band for me. They remind me of punk bands from the 80s – starting with the lead singer resemblance to Dave Pirner. My nine-year-old wondered how he could see with hair in his eyes; I like anything Dave Pirner-esque. The music is a lot of strings (two guitars and a bass) and a drum. The songs were hard, fast and short – but the lyrics struck me. There was a song about a friend who had died called No More Drugs and another called I Killed a Man. I wasn’t surprised to see that they had played with Howler earlier this month. They have a similar sound. Although Howler rarely begins a song with a quick “Love you. Thanks.” Frankie Teardrop seems to start most songs that way.  Have to say, I’ll keep an eye out to see them again.

Finally (for us) was Eleganza. We’ve seen them before. They are much more old school rock with a subtle hint of Americana. Lots of people in the crowd seemed happy to hear pure rock; although that’s not to imply that there were unhappy with the prior bands. People seemed happy with all of the bands but Eleganza was the summer sound they wanted. Lots of dancing going on. A little friendly banter from the crowd to the band. And just about everyone started toe tapping or more when the band covered Rolling Stone’s Shattered. They are a fun band to see with a familiar and homey sound. Even if you’ve never seen them before they’ll remind you of some fun night from your past. We’ll be watching to see them again, too.