Minneapolis Music & Movies in the Parks series is well under way this summer with hundreds of local and regional artists performing more than 200 concerts at five Minneapolis parks, some more well known than others.  While Lake Harriet, with performances seven days a week, may be the most popular site, other parks offer dozens of concerts in a variety of venues.

For more information: Minneapolis Parks & Recreation Board
Full schedule of music and concerts

The most compelling backdrop (aside from sailboats floating behind singers on Lake Harriet Bandstand) is at Father Hennepin Bluffs Park on the northeast Minneapolis side of the Stone Arch Bridge.  Even though the rain had stopped last evening as I set out to hear Brianna Lane, the concert had apparently been called off during the torrential downpour earlier in the day, leaving only the Minneapolis city skyline behind the bandshell to entertain.  Concerts are held every Tuesday evening.

Nearby Nicollet Island amphitheater offers seating for several hundred in a grassy bowl hidden behind the better-known Nicollet Island Pavilion.  Concerts are held every Monday at 7:00 p.m.  Additional activities are on tap at these locations over the Fourth of July weekend as part of the Red, White & Boom! celebration.

Bryant Square Park in the Lyn-Lake area hosts concerts Tuesdays and Thursdays in its POPS (Public Outdoor Performance Space) amphitheatre.  If you are looking for dinner and a show, Minnehaha Falls park offers music every Wednesday, Thursday and Friday, with the bandshell conveniently located near Sea Salt Eatery.

Movies play in parks across the city six nights a week from June 13 to September 3, beginning 15 minutes after sundown. Viewers can find movies by themes such as Family, Date Night, Classics or New Releases, and special mini-series include baseball classics and indigenous music. 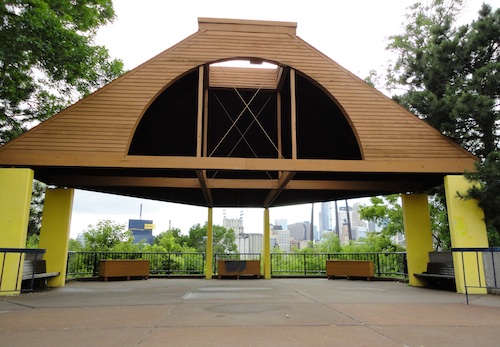