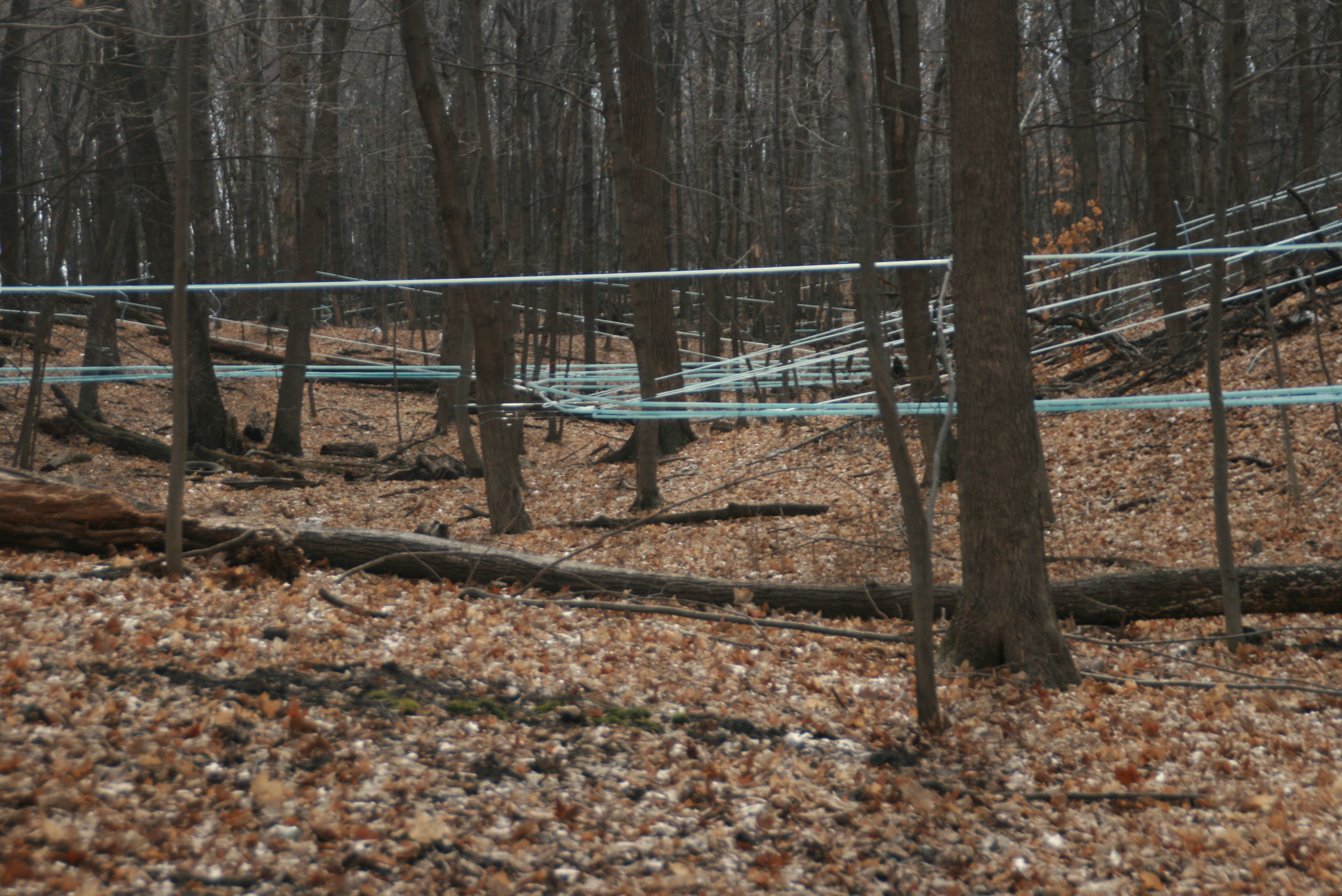 Sugarbushing begins in February when the snow is still on the ground and the sap in the sugar maple trees begins to rise. At the the Wozupi Tribal Gardens’ grove in Prior Lake, that still means it’s time to get to work. But, it no longer means pulling out the metal taps, the stainless steel buckets and the kettles.

“Buckets are for hobbyists,” said Rebecca Yoshino, the director of the Wozupi Tribal Gardens and the maple syrup operation for the Shakopee Mdewakanton Sioux Community. “The bucket system is very labor intensive. You had to put the buckets up and take them down every year. You had to watch the boiling sap and feed wood into the fire every 15 minutes. People used to work in shifts, 24 hours a day.”

Now, there’s an app for that. Maple Bot, developed by Wozupi techie Ole Olmanson, monitors the operation 24-hours a day, letting Yoshino know if there’s something wrong in the system. If the pressure in the lines rises or falls or the sap tank needs attention, Yoshino can check her cell phone from her home.

Out in the grove, surrounded by suburban homes, things have changed, too. The bare trees still rise 60 to 90 feet above the a low ravine, but instead of buckets, the woods are crisscrossed with bright turquoise plastic tubes. The sap collecting system was first tried four years ago and made permanent just this winter. The tubes, kept at a minimum of a two percent grade, run sap from the taps in the trees to a central tank at the lowest point in the woods, part of a gravity system that makes getting the sap a lot easier.

Minnesota is at the far southern edge of the sugar maple habitat. Because of this year’s milder winter, with warmer temperatures and nights above freezing, the harvest from maple trees was down to about 450 gallons from 700 trees. “The trees were really holding on to their sap early on. But, the recent snow means a major recharge. Now, we’re bringing in 1,000 a day,” Yoshino said. “The ideal is warm sunny days and nights that drop below freezing.”

You need to harvest the sap early, she said. Once the trees begin to develop buds, the flavor changes. The average season starts around March 7th, but last year the long harsh winter delayed the sap production a month, into April. An average season is 4 to 6 weeks. Yoshino thinks this will be a short season unless the snow keeps up.

There are six strategically placed pressure gauges along the collection lines, so instead of having to walk the entire line, Yoshino simply closes a valve and watches to see if the pressure goes up. Yoshino and crew check them every morning. She puts her ear to one line. “Hear the hissing?” she said. “That means there a hole in the line.” She walks along, listening and feeling for small holes. She finds a few small squirrel chews but thinks the real problem today might be a leak in one of the taps, an easy fix. You can see the sap flowing through the lines.

Yoshino grew up on an organic farm in Upstate New York. She picked up a college degree in Oregon, but the Pacific Northwest seemed too day-dreamy. “Minnesota seemed like a place where people were more grounded,” she said, so she moved to the Twin Cities and got a job with the Minnesota Historical Society. The idea of working in organic and sustainable agriculture still appealed to her, and five years ago she was hired to run the Mdewakanton Wozupi tribal garden, orchard, free-range chicken operation and, of course, maple syrup harvest and production.

The pure maple sap has the flavor and consistency of slightly sweet, slightly silky water. There’s only a hint of maple flavor. The sap from many kinds of trees can produce sweet syrup (in northern Europe and Asia, white and silver birch trees are tapped for a traditional beverage) but sugar maples have the highest concentration of sugar.

The sap is brought to a tiny boiling building filled maple scented steam and shiny machines. “This,” said Yoshino, “is where the magic happens.”

The first step in creating the syrup is cycling the sap through a large reverse osmosis system, especially designed for maple syrup. The soon-to-be syrup is filtered, heated sterilized and pasteurized. Particulate matter is removed, foam is skimmed off, there’s more heat, more boiling and more filtering. “There are a lot of minerals in maple sap,” said Yoshino. “We want to get all that filtered out.” Sugar concentration is measured in brix. Pure sap is usually about three brix. Boiling brings the syrup to about 66 brix.

The average ratio of sap to syrup is 40 gallons of sap for one gallon of syrup, so good or bad, flavors can amplify. “Everything affects the way it tastes,” she said. “It’s like fine wine. We taste test it and you can tell the difference between batches. It makes a difference if you use a wood fire or fuel oil. The region and the soil and the weather make a difference. It matters how long the sap sits before you boil it.”

Wozupi Gardens Maple Syrup is being rebranded with new bottles with new labels showing up later this year at the Midtown Farmer’s Market, at specialty gift stores and maybe in some Twin Cities co-ops.

“Maple syrup has a traditional place for the tribe. It used to be a vital and necessary source of calories at the end of winter when food was running low,” said Yoshino. Now, it part of an important tradition, even if making it has come into the 21st century.