There is nothing to write about in old St Paul right now except the Surprise Spring of 2012. It’s been 80F for days now, smashing old high temperature records by 10 degrees or more. We’re all giddy from the June that fell onto us in March.

Could there possibly be a downside to it? Maybe. It does bring up a few unrelated stories that show us that change, even when it seems to be for the better, has its own ways. 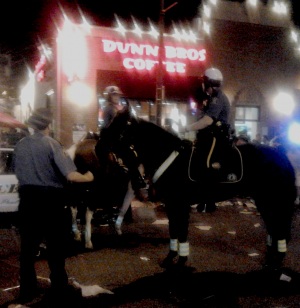 The first story of the weather is St Patrick’s Day, always big in this old railroad town. This year, the green bacchanal collided with the great weather, no less than two hockey games at the Xcel Center, and the calendar that placed it on a Saturday. West Seventh Street, my neighborhood, relies on this date to put the madness into March.

The eight establishments that serve alcohol along West Seventh in the two blocks from Walnut to Chestnut to Kellogg are always packed, but this year’s tent parties went huge. By 8PM the crowd spilled over the sidewalk and was stopping traffic. There were rumors that people were hit by cars, though I can’t confirm this. By 8PM the last hockey game had a full arena of 24k people at one end of a street bubbling beyond capacity, perhaps already 10k people. The St Paul Police had to act fast.

What they decided to do was not use force of any kind. They shut West Seventh, a state highway, and turned it over to the crowd. An informal “beergarden” was declared and open alcohol laws were temporarily ignored. A man wandering past the barricade at Walnut was not told to ditch his beer – the police on duty asked him, “Could you please not take that past? Thanks.” They were cheerful, mellow, and enjoying the mild night as much as the revelers.

The contrast between this spontaneous event and the tense Republican Convention of 2008 could not be more stark. I have never been more proud of our police. They kept order without insisting on command, they kept peace with a smile. What could have been a riot was turned into the biggest party we might ever throw, an instant Mardi Gras, with very few medical emergencies. West Seventh was re-opened around 11PM when the crowds thinned.

That’s not the only strangeness that came from this weather, however. That same night we were enjoying Sudden Spring, 36 inches of snow fell in Flagstaff, Arizona. A massive bubble of cold air reached deep into the Rocky Mountain states, temporarily rendering the weather map of the US a longitudinal oddity. Our strange weather is only half of the story. What could possibly cause this?

It’s important to say that the mild weather over the US is not a simple case of global warming. Europe was incredibly cold this Winter, with snow falling in Rome and desperate cold lingering over central Asia far deeper and longer than usual.

What could cause weather this uneven? Those of you who know me won’t be surprised by my answer. In 2010 we entered a period of solar activity unlike anything seen since 1850. Sunspots, a rough measure of solar energy, stopped appearing for the first time in 60 years. The ionized particles that jet out from the sun collapsed, lowering the earth’s magnetic shielding to levels never before measured. A brief burst made the news recently, but the sun has been unusually quiet.

What this means is that earth is almost certainly cooling down. It takes a long time to happen, however, because the heat capacity of this planet is large, so the effects are hitting us now. It’s not a uniform reduction in temperature, but a great increase in chaos as the seas stay pretty even but large land masses absorb less energy. Our Gulf of Mexico is probably protecting us, at least for now.

This is going to be one Hell of a ride for a few years. We don’t really know how it will go.

The last strange effect of good weather over North America worthy of note comes in government statistics. We’ve had some very good economic news lately, showing increased confidence and a big boost in construction activity. Mild weather has made a lot of that possible. Ups and downs through the course of the year are supposed to be evened out by “seasonal adjustment” in most of the reported figures, but those won’t kick into Spring mode for another month. Everything could look a lot worse in April when the adjustments kick in, unless more momentum builds. Keep your eyes open on this one.

Could this Sudden Spring get any stranger? The answer is, of course, things can always get loopier. But most of us are just enjoying it, like an amazingly warm St Patrick’s Day out on West Seventh.