Imagine being the Norwegian art collector who happened to have a painting by Vincent Van Gogh stashed in the attic. The work had been identified as a Van Gogh over a century ago, but it was subsequently dismissed as a genuine masterpiece both in 1908 and 1991.

Well now it’s back, and in 2013 it’s a superstar. All is forgiven, “Sunset at Montmajour”. You’re legit!

If you happen to own the painting this is good news investment-wise, but it’s got to sting a bit aesthetically. After all, nothing about the artwork itself has changed. It is no more lovely today than it was last year or fifty years ago – the only difference is that the experts now agree it is an authentic Van Gogh. Sure, you can put the painting on display and draw admiring throngs, but remember you’re the one who had it stashed in the crawl space for years – tucked under the eaves with those moth-eaten area rugs and Grandma’s chipped china.

What does that say about your eye? Are you unable to appreciate beauty for its own sake? Or did you deliberately ignore the work because it had a spotty history and other people put it down? Does the brand name really mean that much?

In any case, this is very bad news for people trying to kick a knick-knack addiction or those in the professional clutter-reduction industry. Because nothing keeps an attic (or a basement) full of crap as surely as the notion that “some of that stuff could be worth a few bucks.” 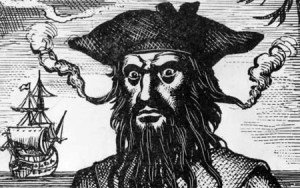 But remember, that cuts both ways. Your unidentified attic treasures could be lost with the next pirate landing. I sent this story to Captain Billy, the skipper of the rogue ship Muskellunge, and he assured me that no matter where the riches are stashed, he and his boys are likely to unearth them, even if they’re not in the earth.

As swashbucklers are wont to do, he shared some drinking song lyrics that speak to the topic.

When pirates swarm across a port
they has techniques of every sort.
There’s some that comes in with the tide
and ravages from side to side.

While others who is much maligned
sneaks up on cities from behind.
But all of them, or so I’m told,
relies on maps to find the gold.

They looks for signs and uses stealth
to target ostentatious wealth.
No matter what the markers show,
there’s no direction they won’t go.

If “X” is drawn upon the ground
A hearty pirate plunders down.
But if it’s buried overhead
He’ll pillage towards the roof instead.

What’s in your attic?