Students entering the University of Minnesota should have an orientation program to help them manage their finances and control their debts, said a report from a student group to the Board of Regents.

Eight students, who serve as representatives to the Board of Regents, prepared a 14-page study recommending ways to help students control their debts and manage their finances.

Meghan Mason, chairwoman the student representatives, presented proposals as their annual report to the board at the June 13 Regents meeting.

The students recommended that the university both attack the rising student debt and teach students how to control their finances.

The students’ report cited a study showing that “seven in 10 college seniors graduating last year had student loan debt, with an average of $29,400 per borrower.“

The student reps praised U of M President Eric W. Kaler and the Minnesota legislature for freezing tuition for two years, but financial literacy goes beyond educational costs.

“Financial decisions made during a student’s educational career influence their ability to repay their debts, the size of their savings account, and value of their credit score. Moreover, these decisions impact their time to graduation, ability to be economic consumers, pursuit of additional degrees, and their ultimate career path,” the report said.

“Students are eager to learn about financial literacy,” Mason told the board. “More than half the graduate students pay some amount of money out-of-pocket to fund their current degree in the form of tuition or fees. Even more so, 13 percent of graduate students contribute more than $10,000 to pay for their degree.

“Only about 59 percent of graduate students receive most of the funding for their degree and only 27 percent have that funding guaranteed when they arrive on campus,” she said.

“To offset these educational costs, some students are turning to credit cards,” she said. “Only about 20 percent of students have received debt-related counseling.”

Mason said the experiences of students are different on each of the University campuses, but they suggested looking at the University of Minnesota-Duluth as a model for the entire system.

UMD’s Live Like a Student program, called LLAS for short, used social media and a variety of strategies to help students take control of their spending.

In their written report, the students said LLAS “focused on educating students about the cornerstones of personal finance including borrowing, saving, and the use of credit with the ultimate goal of behavior change among the student population in those areas.” 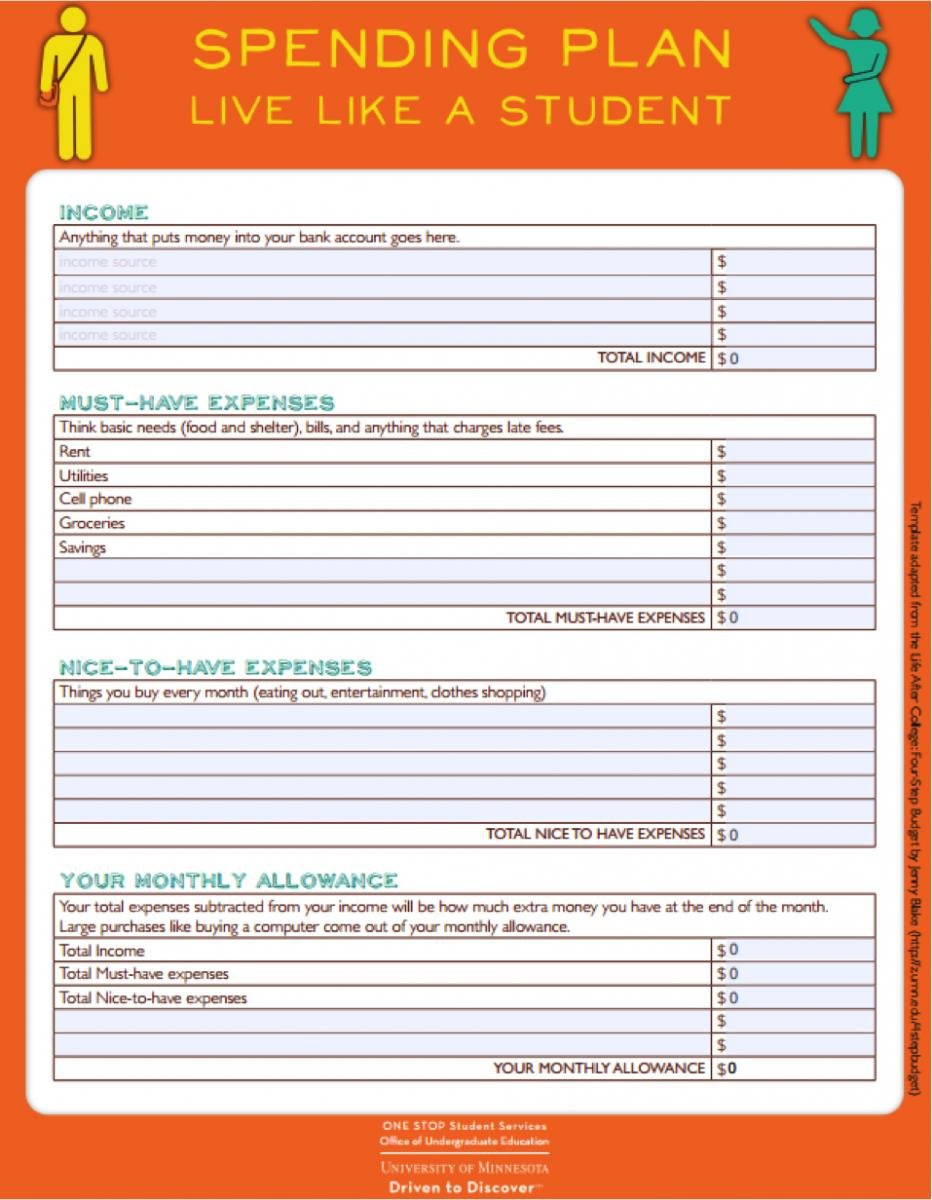 While both UMD and the Twin Cities campus have online resources, UMD also has a financial literacy counselor who speaks to classes and groups and also meets individually with students.

“Sample topics that may be discussed include: how small financial decisions add up over time, the cost of school, rules of borrowing, debt-to-salary repayment comparison, and how to monitor student loan debt. More importantly, the financial literacy counselor tailors her presentations and conversations to the students’ academic standing, emphasizing different topics more relevant to the students’ current year in school,” the report said.

“In the program’s inaugural year on campus, the UMD student financial literacy counselor has spoken to over 700 students. Another critical element of the UMD LLAS initiative is that it reaches students through social media that includes an easy-to-use comprehensive website, Facebook page, and Twitter account.”

These and other channels, like posters and digital signage, reinforce messages and provide tips and tools about wise spending and saving choices, the report said.

A student applying for a credit card could consult “the UMD LLAS website to choose the card that’s right for him/her through a series of targeted questions. The UMD LLAS Facebook page and Twitter feeds (@UMNLLAS) provide shorter spurts of information on a more constant basis with memorable images and taglines to encourage students to ‘live like a student now, so you don’t have to later.’”

In response to regents’ questions, Mason said, “I don’t think there are any pressures that are unique to the University of Minnesota. The increasing debt is the result of overall higher education systems.”

Mason, a doctoral student in public health, said the university’s tuition freeze for next year will help, but added that “graduate and professional students can’t anticipate their tuition from year to year.”

President Kaler called the report thoughtful. “It’s important to have a broader conversation about the financial consequences of the decisions students make,” he said. “It’ an important conversation and I appreciate your bringing it forward.”

The students also updated their report from last fall on campus sexual assault. Mason and her report cited President Obama’s advice that campuses create surveys of their own cultures of sexual assault, promote bystander intervention and identify victim advocates.

Kaler said the U was “beyond compliant” with President Obama’s guidelines on sexual assault. “We are working with a vendor to see whether we might do a campus climate survey but we’re a little worried about survey fatigue” with so many studies going on.

“It’s a very important job that you and your colleagues do,” Kaler said. “I was a student rep to the board a million years ago.” Actually, he served in 1981-82, according to the board’s website.