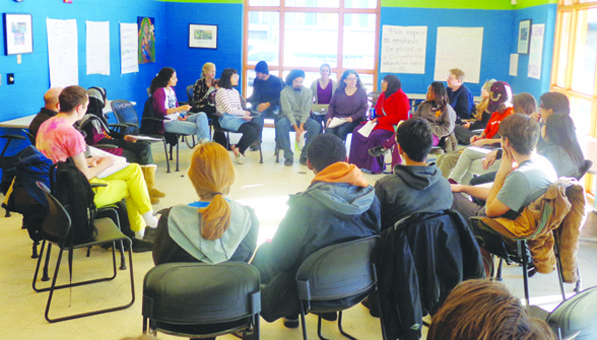 Whose Diversity? is a diverse “collective” of University of Minnesota undergraduate and graduate students who came together at the beginning of the year to argue against what they call a “cosmetic” commitment to diversity at the school. After they presented a list of “diversity demands” to President Eric Kaler, the group was featured in an MSR June front page story (“Student group presents ‘diversity demands’ to U of M officials: ‘Whose Diversity?’ resists cooptation, wants more than ‘sprinkling a few faces of color in catalogues,’” June 12, 2014),

After a December 1 meeting last week with Kaler and the group at the Humphrey School of Public Affairs, a University statement emailed to the MSR said, “The meeting was productive. We look forward to working with all students, faculty and staff as we continue to address the important issues affecting campus climate.”

Group members, however, say they will “push” Kaler and other school administrators to do more.

“I want to believe [Kaler] is sincere,” said Tanja Andie (right), a U of M sociology graduate student who was among the dozen Whose Diversity? members that met with the school president. “We had that meeting with [him] despite [the fact] that he didn’t want to meet off campus. I came out of it hopeful and a little shaken.”

She and several others at the meeting spoke to the MSR after a scheduled community forum last Saturday at Brian Coyle Community Center that was attended by over 20 persons. Kaler was invited to attend the forum but declined.

“He was very diplomatic,” added senior Liberal Arts student Hoda Isak (left). “I asked him at the end of the meeting would he meet with us [again],” but the president “was very, very iffy.”

“We did have a couple more demands” at last week’s meeting such as the school’s recent closure of the Post-Secondary Teaching and Learning [PSTL] program and more support for the Chicano Studies program, noted doctoral student Rahsaan Mahadeo. “The mismatch between students of color and the professors they learn from, and the mismatch between faculty of color and the students they teach” should be addressed, he said, referring to the school’s recruitment and hiring efforts. “I wonder to what extent the president actually understands…how meaningful [it is] for us students of color to have a professor that looks like us.”

U of M Sociology Professor David Pellow said he came to the forum because he supports Whose Diversity?’s efforts. He told the students, “If you weren’t feeling fear of retaliation and expulsion, discipline, etc. you wouldn’t be doing the right thing and they [school officials] wouldn’t feel threatened. That’s when you know you are doing something meaningful. You haven’t backed down.”

Expulsion threats, real or implied won’t be a deterrent for him, pledged Mahadeo. Coalition building with other campus- and community-based organizations is important as well, he said. “A lot of us are doing the same work, but it’s hard to get on the same page.” The group also prefers meeting with Kaler and other top U of M administrators off-campus.

“We are just playing within his parameters when meeting with him” in his office or on campus, said Mahadeo. “That’s why we wanted it on different terms, where the power would be diffused — at a community center that’s representative of the people he claims to serve. There are a lot of people that share our frustration, and we want to give them the opportunity to share it with him.”

“I really hope the community keeps him to his word that he does support hiring [more persons of color],” said Andie.

“We see diversity as an ongoing process,” concluded Mahadeo.