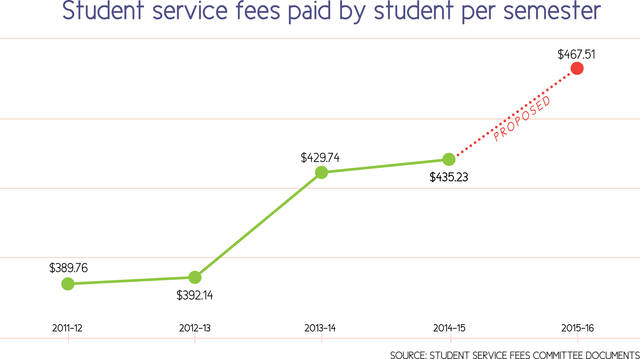 If the fees committee’s initial recommendations stick, student fees will increase by more than $30 each semester.

Next year, University of Minnesota students may have to dish out $467 each semester in student services fees — an increase of more than $30 from the current charge.

The Student Services Fees Committee on Tuesday released its initial funding recommendations, fulfilling most of about $35.7 million in requests from campus organizations. If those initial recommendations stick, fees for full-time students will increase next school year.

“The quantity of requests this year was very high,” said student groups committee Chair Achintya Saurabh, adding that the amount of funding requested was similar to last year.

Last year, the committee approved funding for 77 student groups with about $2.1 million.

Saurabh said when recommending funds, the committee examined how the groups benefit the wider student community and whether their finances are sound.

“We looked at specifically how each student group impacted all students on campus,” he said, “and what is the breadth of the services they provided.”

Although worries that some student groups had mishandled funds popped up last year, Saurabh said there wasn’t much concern this year.

“As a whole, there was nothing big,” he said.

Eight student cultural centers requested a combined total of about $464,000 in funds this year but were recommended only about $324,000.

One of these organizations, the Disabled Student Cultural Center, was recommended only $18,751 of its nearly $37,400 request because many of the group’s budget items were unclear, according to SSFC documents.

One example of this was Catholic Students United’s $83,645 request, for which the committee’s initial recommendations offered $32,570. The group received $3,450 in fees last year.

Organizations will be able to appeal funding recommendations in public forums Wednesday and Friday. Final funding allocations are due out in spring.