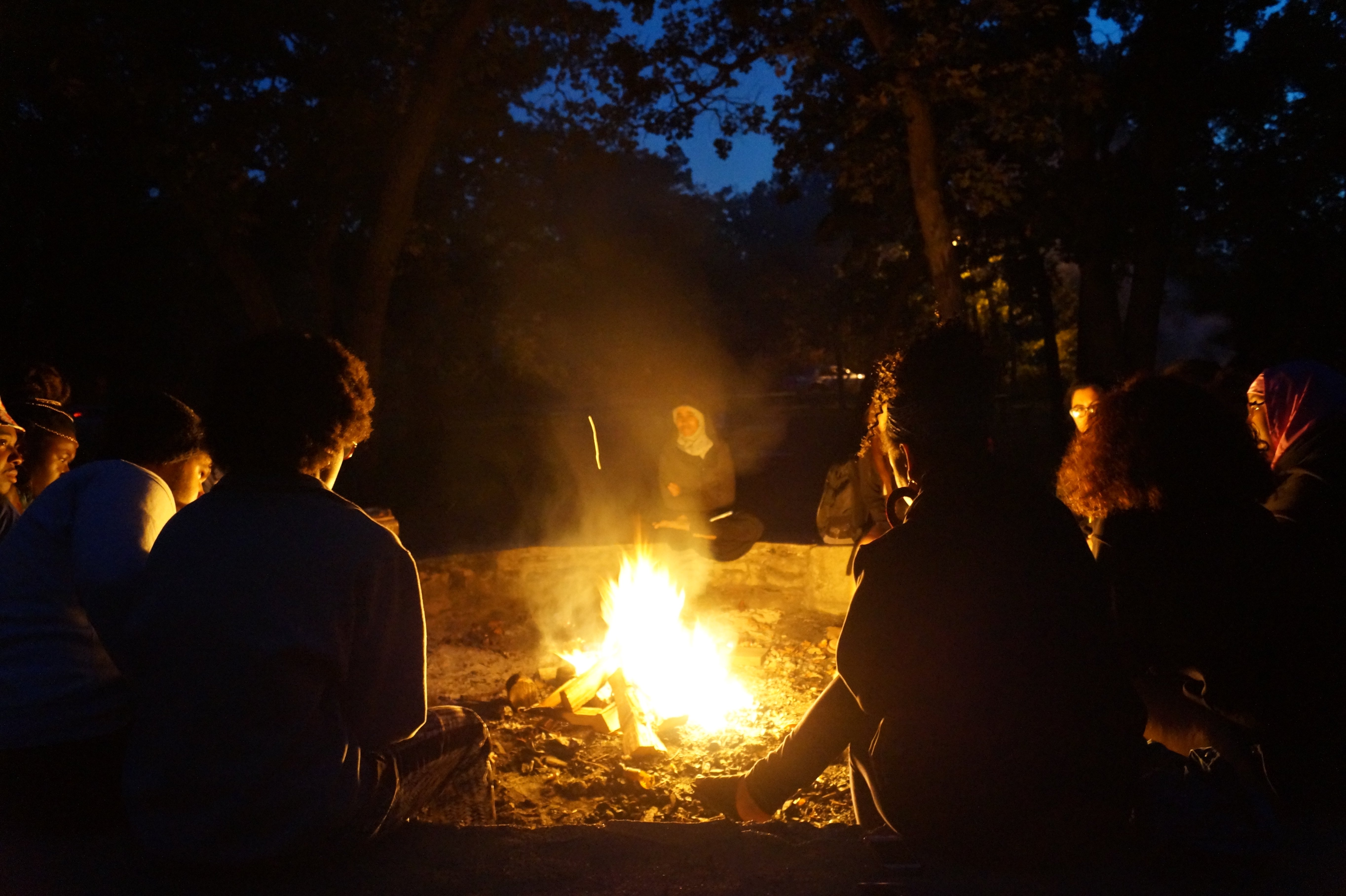 (Photo by Sabrina Kennelly) Students from Augsburg, Macalester, St. Thomas and the University of Minnesota gathered around a bonfire in Como Park last Saturday, Sept. 27 to discuss topics like the achievement gap, college access and the coverage of minorities in the media.

Huddled around a bonfire in Como Park, eating s’mores, 14 college students sat and told each other a different kind of horror story — the story of the state’s achievement gap.

The Minnesota Student Power Network’s “MN Fire Up” bonfire invited Minnesota students of color to come talk about the issues affecting their success at school and in the workplace.

The student network was created to address issues affecting young students of color in Minnesota, and provide participants with resources and information to help increase their chances of success. The group held their first meeting on Sept. 27 at Como Park in St. Paul in partnership with Neighborhoods Organizing for Change and NAACP St. Paul Youth.

“Our goals are to connect, support and empower young organizers in Minnesota, focusing on marginalized groups of students,” said Minnesota Student Power Network leader Dua Saleh. “We hope to uplift them and provide them with the resources needed to achieve their goals.”

According to the most recent data from the Minnesota Department of Education, only 57 percent of Black Minnesota students are graduating from high school, compared to 85 percent of their White counterparts. And that trend carries on into post-secondary education.

Saleh said that college students of color don’t have access to the same amount of resources compared to White students, which puts them at a disadvantage. There’s also more White teachers than teachers of color, she said, which makes it harder for students of color to relate to them.

St. Thomas graduate student Ngeri Azeuwah said that some of the problems are due to differences in standards between people of color and Whites. For instance, she said, the format and language of Minnesota’s standardized tests are geared towards White students rather than African American students.

“It’s not an achievement gap. It’s a resource gap,” Azeuwah said “The standards are the same but the resources [available] are different.”

Macalester College student Ayaan Natala said she noticed most of her fellow students at Macalester are White, and she’s noticed that most college students aren’t engaged with their community.

“They want to help others that are already in college. It creates localized brain drain which makes no sense,” Natala said. “While I’m at Macalester, I’m thinking about the people who aren’t there. How can we get more people of color in college?”

The students also discussed the role the media plays in the portrayal of minority populations.

Augsburg College student Nadine Ashby said there’s a lack of coverage when it comes to violence against Black women, for instance, so no one ever hears about it.

“Complete stories are missing in the media. They are half-truths and attribute it to all populations,” Ashby said. “The media has power to alter people’s views on groups.”

Augsburg student Rae Sneed said most people get their news from Western media, which he believes is full of false perceptions of minority groups.

The night ended with a group affirmation, where the students discussed their dreams moving forward.

“We believe in you,” they said out loud. “We got your back.”

For more information on the Minnesota Student Power Network, and how you can get involved, check out their Facebook page here.