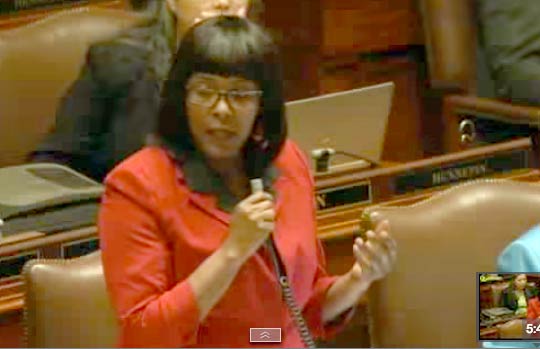 Others booed, but Rep. Rena Moran (DFL-St.Paul) thought for several hours before responding to an offensive remark Rep. Jim Newberger (R-Becker) had made about North Minneapolis.

During a debate on funding for the North Star rail line Newberger said “Boy, wouldn’t that be convenient, to have that rail line going from the prison to North Minneapolis.” After hearing some grumbling he quickly added, “or to any section of our state.” Boos were heard in the House chamber.

As the clock was approaching midnight, Moran got up to address the body on a point of personal privilege.

“So often we say let it go, let it pass. You know, don’t respond to it. But I feel that I have a need to respond to Rep. Newberger’s comments that he made earlier.”

Moran said she found Newberger’s initial comment offensive. “I truly felt disrespected myself. And I know I don’t stand alone in feeling disrespect but North Minneapolis and St. Paul and many other communities that are so often targeted with disrespectful biased language.”

Newberger had quickly apologized for naming North Minneapolis saying “but that’s what came into my mind. It doesn’t matter, it could be any part of the city. But if you’re going to connect a large metro to a prison there’s going to be some concerns. I would be lying if I said there wasn’t.”

Moran was disappointed in those remarks as well.

“He (Newberger) depicted St. Cloud prison with North Minneapolis, a community that’s very diverse. So much like the community in St. Paul. But that is what came into his mind – prison and a community of color.

“And for those who don’t know what structural racism is…maybe it’s not about legislators who are intentionally creating policy that disproportionately impact communities of color. But that is what happens.

“And it comes when we have a mindset of looking at stereotypes. Looking at a community where we don’t have any relationship or knowledge of that community and we make assumptions the people within that community. People who are working very hard for themselves and their community and their kin to have better outcomes. To be self-sustained and sustainable.

“Families who want the best for themselves and their children. But it’s the biases and the stereotypes that gets in the way from that happening.”

Moran saw parallels between the Republican majority’s emphasis this session on providing more resources to areas outside the metro area and the need to provide resources to communities of color that lack resources.

“We are just the afterthought. What you’re doing doesn’t work for us,” is what Moran said she has been hearing from rural communities. “And that is just about what communities of color has been saying for a very long time. What is happening is not working for our community. We are a community of people who are under resourced.”

“And so I just hope as we go, as we go on as a body that we look within ourselves about what we need to do to make sure that we’re working development of all statewide to create the opportunities for all that we need to insure that all are getting the jobs that they need. That all are getting a good education that they need. That we are really working towards the betterment of our communities, that we are not stopping, locking up communities of color – especially our black men who are (inaudible) within our prison systems.

Moran turned her final comment directly to Newberger. “I’m hoping that going forth you will spend some time expanding your worldview and getting to know the people a bit better without making those types of assumptions.”