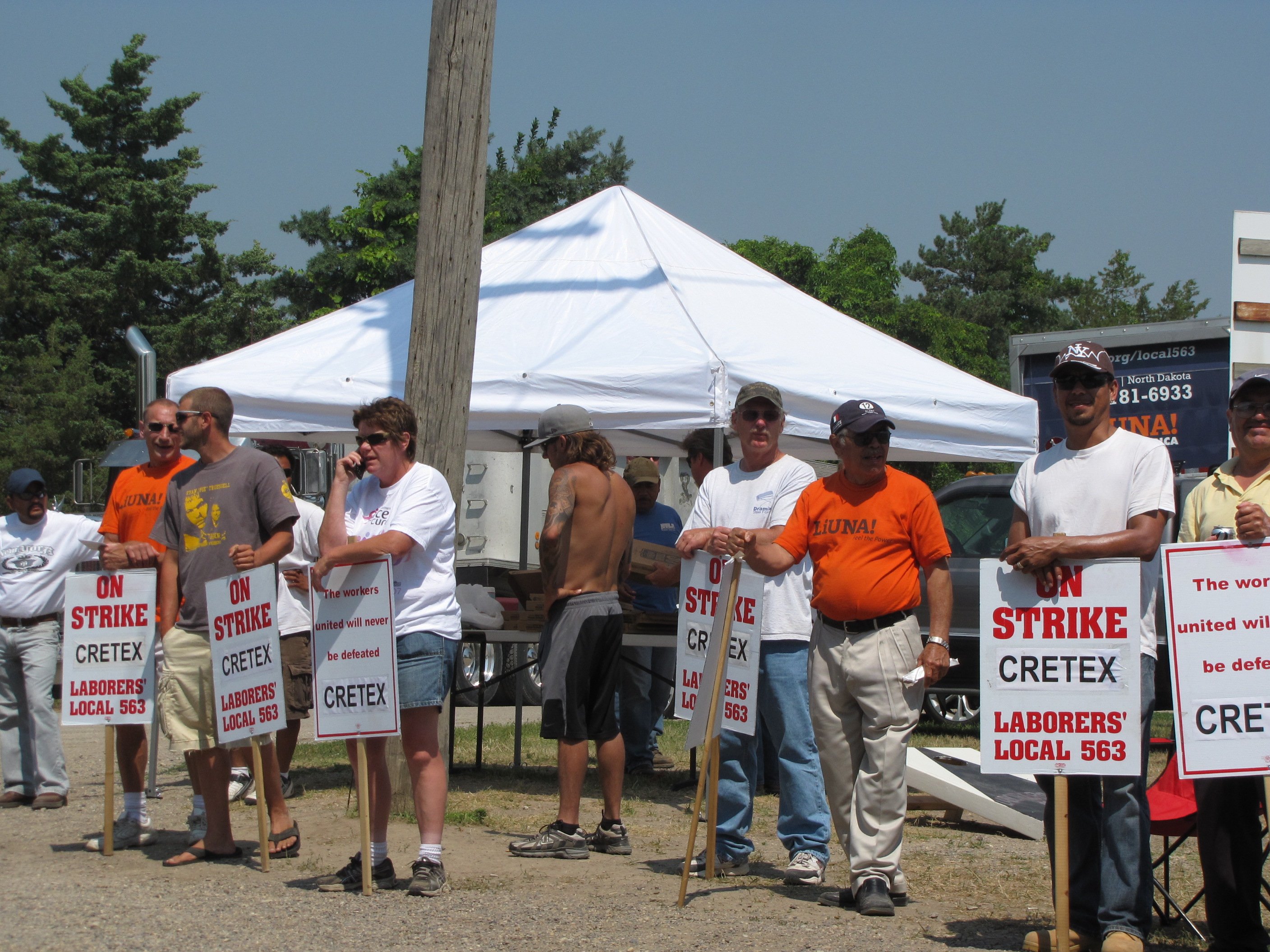 July 10 picket line at Cretex Concrete Products in Shakopee, where 38 members of Laborers Local 563 have been on strike since June 19. The workers went on strike rather than accept a company proposal to eliminate their pension.

For 38 members of Laborers Local 563 on strike at the Cretex concrete manufacturing plant, preserving the promise of their hard-earned pension is the key issue.

Workers voted to go on strike June 19. When the Labor Review went to press July 19, they continued to walk their picket line — with no further negotiations scheduled, according to Steve Buck, Local 563 business agent.

A visit to the Cretex picket line mid-day July 10 took place as the morning picket shift of striking workers mingled with the afternoon picket shift and the union provided a dozen take-out pizzas for lunch for all.

“We’ve been out for three weeks,” said Todd Mutch, Apple Valley, who has worked 29 years at Cretex and is Local 563’s steward at the plant. “Out of the three weeks, they haven’t made one day’s worth of product.”

Mutch summed up the reason for the strike. “We don’t want to give up our pension,” Mutch said. “They’ve been trying to shove this 401(k) down our throats.”

“They’re trying to take money we allocated from our raises and put it in their pocket,” he added.

In place of the $4.07 per hour that the workers have chosen to allocate to their defined benefit Laborers pension fund, the company would contribute $1.19 per hour to a 401(k) plan.

The workers are pretty savvy — they know that they’re better off with the current defined benefit plan instead of the proposed 401(k) plan, which is subject to the ups and downs of the stock market.

Plus, under the company proposal, workers with less than five years at Cretex and not fully vested in the pension would lose everything they’ve contributed.

‘We’re diverse. We’ve got Hispanics. We’ve got women… We’re not going to give up… We all want our pension.’

One of those workers is Alex Ocampo, New Hope, who has worked three years at the plant. “I’ve been putting into the pension,” he said. “In the last three years I’ve put in close to $6,000. Now they want to keep the money… It’s not their money. It’s our money.”

Ocampo added: “there’s a lot of guys like me.”

The Laborers at Cretex also include many longtime workers like Rhonda Wellentin, Belle Plaine, who has worked 19 years at the plant and is one of three women among the strikers. “I want my pension and I don’t think the corporation should be taking any money from us,” she said. “That’s mainly why I worked here for so long in a man’s world.”

Dan Parkin, Lakeville, has worked 10 years for Cretex at the company’s Shakopee plant and 5 years at the company’s Elk River plant. After years of physically-demanding work at Cretex, he said, the promised pension is “your only light at the end of the tunnel.”

“I’ve never stood up for anything in my life, whether it’s ‘Save the Whales’ or anything,” he said. “But this is too much to give up.”

“There’s not much we can do but stay together and try to win,” Ocampo said.

In addition to strike benefits, Local 563 is helping the workers by covering the COBRA payments to maintain their health insurance — which the company cut off the day they went on strike.

The workers welcome support from visitors to their picket line at 7070 Cretex Avenue South in Shakopee (just west of U.S. Hwy. 169 and off of Co. Rd. 101).