On December 4th, the Metropolitan Council, meeting as the Committee of the Whole, discussed a draft of Thrive MSP 2040, a version of which will soon be the latest long-range planning document for the region. State statuterequires the development of this plan every ten years, and local comprehensive plans must be “compatible” and “conform” to the plans for metropolitan systems.

In all, it’s a significant departure from the previous regional plan. The plan pivots towards a “fix-it-first” policy for regional transportation infrastructure, advances redevelopment, aims to address equity in housing, transportation and jobs, and takes a strong stance on water conservation and supply issues.

And for the first time, our regional plan will address climate change.

And it’s not a moment too soon. The most recent report from the UN Intergovernmental Panel on Climate Change, released in September, established a “carbon budget”, for the first time identifying the total amount of carbon that can be released into the atmosphere and still maintain a chance that we can avoid the most dangerous impacts of climate change. To stay within the budget, global emissions must peak in 2020. Current trajectories are consistent with some of the most carbon-intensive modeling by the IPCC, putting the world on a track to warm 3-5 degrees by 2100. In other words, no where close to where we need to go.

Minnesota is also falling short of its own emissions reduction goals. In 2007, the legislature adopted targets for emission reductions by 2015, 2025 and 2050. With only two years to go until the first target date, statewide emissions are on track to be about 14% higher than planned.

The current draft of Thrive MSP begins with recognition of some of the risks of climate change:

Climate change is already affecting our region as we are seeing more severe weather events and temperature extremes. In addition to the human and agricultural impacts of heat waves, the rise of severe weather is already increasing homeowner insurance costs and infrastructure repair costs such as that borne in 2012 by the City of Duluth in the aftermath of severe rainfall.

Indeed. Since 2004 Minnesota has seen three separate 1,000-year flood events. 2012 busted all-time temperature records across the state and nation. And Minnesota is now a national leader in catastrophic insurance losses due to extreme weather.

In the section entitled Providing leadership to support climate change mitigation, adaptation and resilience, the plan states, “Over the long term, one of the greatest threats to our region’s ongoing prosperity and livability may be climate change.” After that intro, the plan details a number of responses the Council will take to address climate change through their work. Here is what’s encouraging:

In my view, however, the plan doesn’t go far enough. Many elements could be added or strengthened:

Why is it so important that we get this right? What does 4 degrees C number mean? According to a recent World Bank report,

A 4°C world is likely to be one in which communities, cities and countries would experience severe disruptions, damage, and dislocation, with many of these risks spread unequally. It is likely that the poor will suffer most and the global community could become more fractured, and unequal than today. The projected 4°C warming simply must not be allowed to occur. 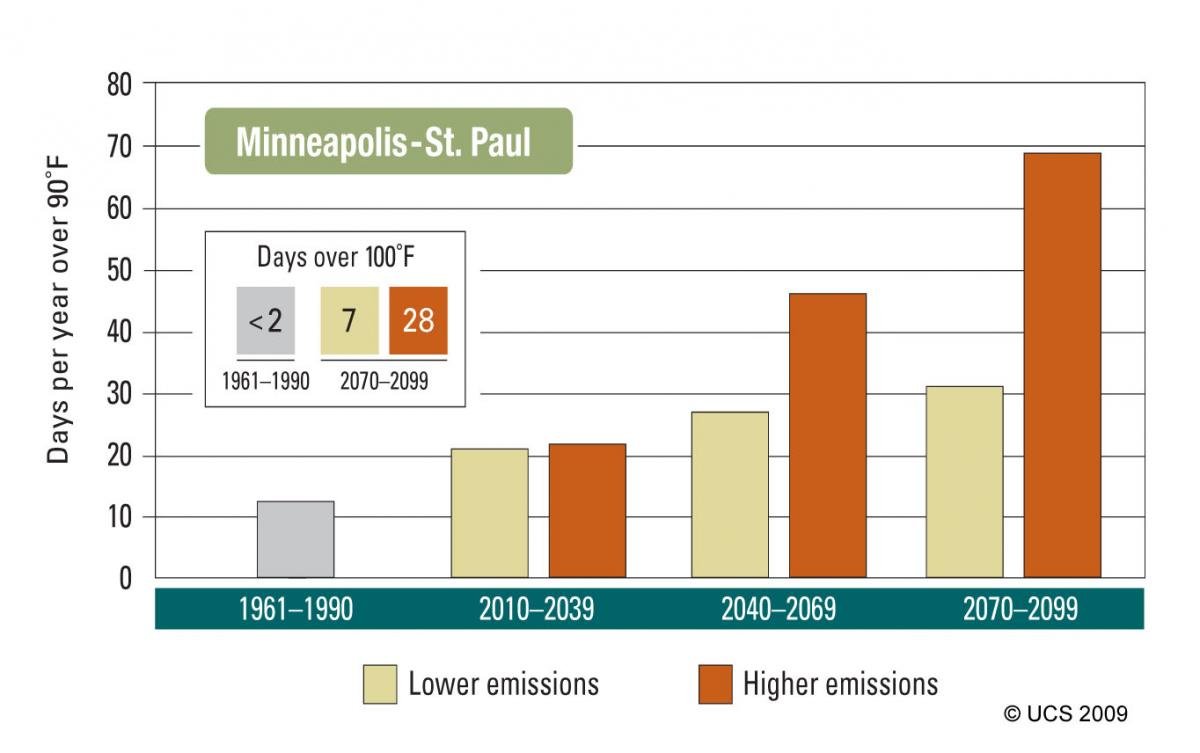 Minnesota would be a very different place by the end of the century under our current emissions path. Heat waves of the once-in-20-years variety might happen every four years. Very heavy downpours, like what we saw in Duluth in 2012, might happen every four to six years instead of every 20 years, and the heaviest downpours would reach even greater magnitude. And every summer in the metro we would average 60-75 days over 90 degrees rather than the 15 of recent past.[1] These changes would have a profound impact on our infrastructure and our way of life. And even with all that, Minnesota will probably be better off than many locations on the planet.

Our region certainly can’t address this issue alone, but we have a responsibility to do our part. The science also says we can’t wait another ten years to start addressing the problem. However, as this plan is currently written, the specifics on climate response are too ambiguous, and risk being watered down during implementation.The regional plan is one of the state’s most significant pieces of land use and transportation policy. By fully embracing state goals and calling for strong response, this could be a document that makes Minnesota a national leader in climate change response.

[1] This paragraph summarizes information from the US Global Change Research Program. http://nca2009.globalchange.gov/midwest