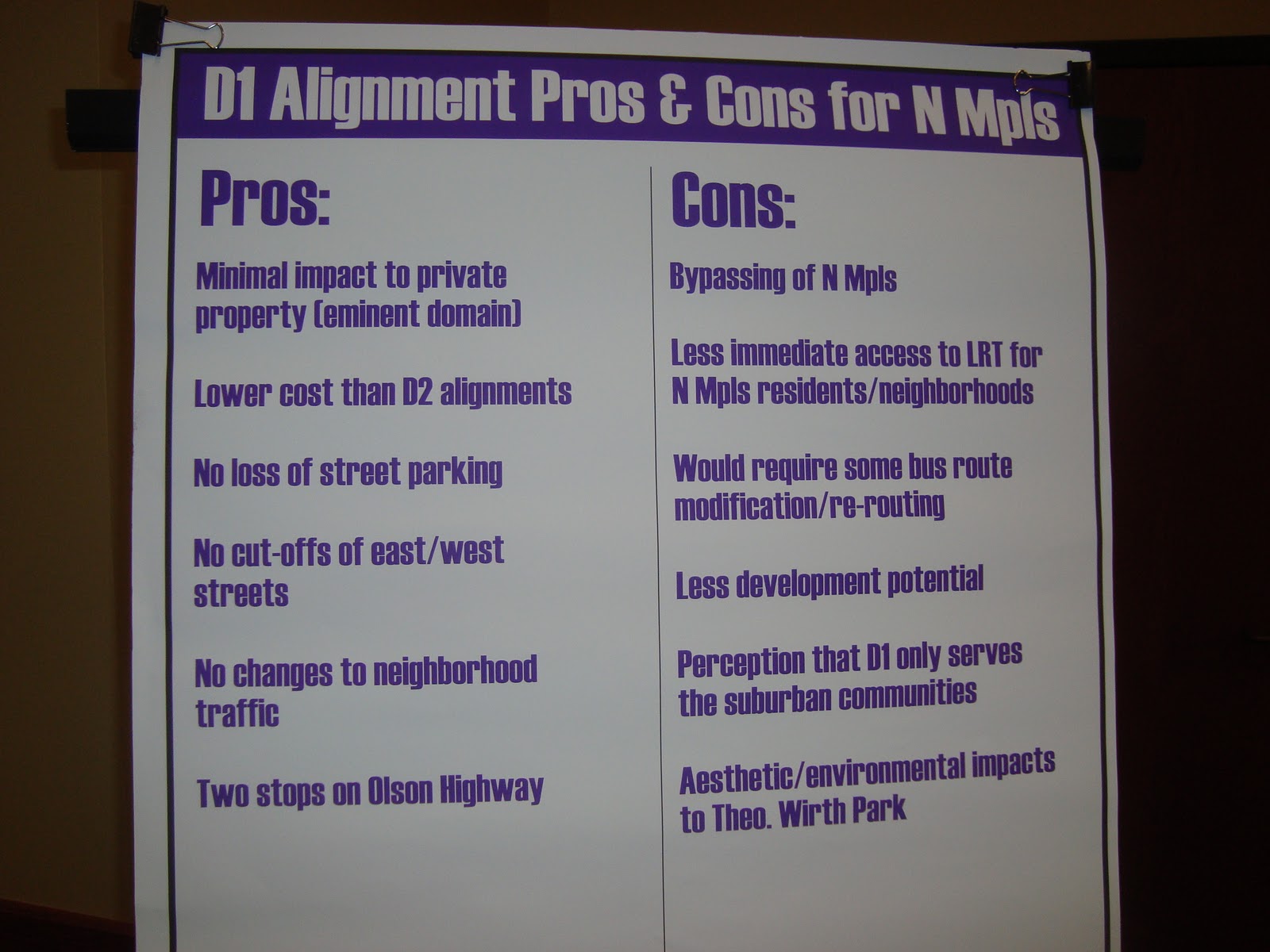 So the last post was, I admit, really not well-written.  Let’s start from a little farther back in regards to northside transit options here.

Most folks may know the basics, but just to be sure:  “D1” refers to the route along the Bottineau transit corridor that would come from the northwest suburbs, down through Theo Wirth Park along existing rail lines, then connect with Highway 55 and head to downtown Minneapolis.  D1 has several advantages, in that it disrupts the least amount of housing, it doesn’t cut off east/west streets, costs less, and does not take away parking.  The disadvantages would be that it does not have a connection to North Memorial, making jobs access more difficult, it wouldn’t allow for as much economic development, and it would require a “feeder system” to bring residents to the light rail stops.  And people from outside of NoMi would be less likely to get onto that feeder system to come into our communities than if they got off on a light rail stop at Penn and Broadway.

“D2” refers to a variety of lines, D2a, D2b, D2c, D2d, and D2w, if I’m getting them all in.  Those options vary in terms of whether they go down either Penn or Oliver, and would need to take different amounts of housing/street right-of-way.  The purpose of the last meeting was to take a vote on which of the D2 alignments would be compared to D1.  The project is moving forward and the appropriate entities need to start doing cost and environmental/community impact comparisons.  In order to do that, they need to compare D1 with one of the D2 routes.

My notes are back in Minneapolis, so I guess this will have to be a three-part post when I return and write about which D2 route won out.  I personally favored D2w, as that would have disrupted the least amount of housing out of all D2 possibilities.  D1 still outdoes D2 in that regard.  Other D2 pros and cons are photographed above.

And although the conversations have been almost exclusively about light rail, I’m glad to see the Northside Transportation Network’s website reference the northisde streetcar plan.  That’s what I’ll get into now. The current proposed streetcars on Broadway would stop at or near North Memorial, solving one deficiency of the D1 route.  There is a 169-page feasability final report from December 2007 and a 109-page final funding report from March of 2010, although the funding report only addresses the downtown-area lines.  Both contain a disclaimer that the reports are available in alternative formats.  I’m thinking of requesting them in origami or interpretive dance formats, in the hopes that they will be slightly less boring.

In a recent community meeting, one of my colleagues observed that there still seems to be a stigma around taking the bus.  If you’re on a train, that’s kind of hip.  Bikes encourage fitness, and cars are of course the norm.  But somehow if you’re on a public bus, there is a perception that there must be something deficient about you or your situation that would put you there.  We need to change that or find alternative methods of mass transit.  Streetcars empirically do that, increasing ridership between 15-50% over bus ridership along the same corridors.  Why is that?

In Toronto, one of their busiest bus lines was replaced with a streetcar, and ridership went up by 15%.  The Toronto Transit Commission estimates that up to 60% of their streetcar riders are “choice” passengers – that is, they own a car but elect to travel via streetcars instead.  Among the reasons for this:  streetcars don’t have to move in and out of traffic and are therefore perceived as faster (even when commute times are not measurably different) than buses, and a smoother ride allows passengers to write or type on streetcars, which they could not do on the bus.

Lest we dismiss Toronto’s system as a byproduct of the desire to get away from the insane cold and/or Celine Dion music, we can head south to Memphis, Tennessee.  In 1993 they started with a 2.5-mile line downtown.  Since then, another 4.5 miles were added and ridership has gone from 500,000 in 1993 to 1.5 million in 2004.  In Memphis ridership was a mix of workers and recreational users, but contrary to common perceptions about mass transit, ridership was heaviest on Saturdays.  Surveys showed that almost half of the riders could have made the trip by car, but chose streetcars “for the experience.”  Eighty-three percent of riders said they did not ordinarily use public transit.  In an interesting contrast to Minneapolis, Memphis streetcars paved the way for a light rail system.

Based on user surveys, it does seem that streetcars would bring economic development, and provide access to jobs, and be less disruptive to existing residential/commercial corridors.  So even though I started out on the D1/D2 issue as a strong proponent of bringing LRT down Penn/Broadway, I’ve since changed my tune.  I believe the best course for transit in NoMi is a D1 light rail route, with a streetcar system along Broadway, and other feeder corridors throughout the neighborhood. 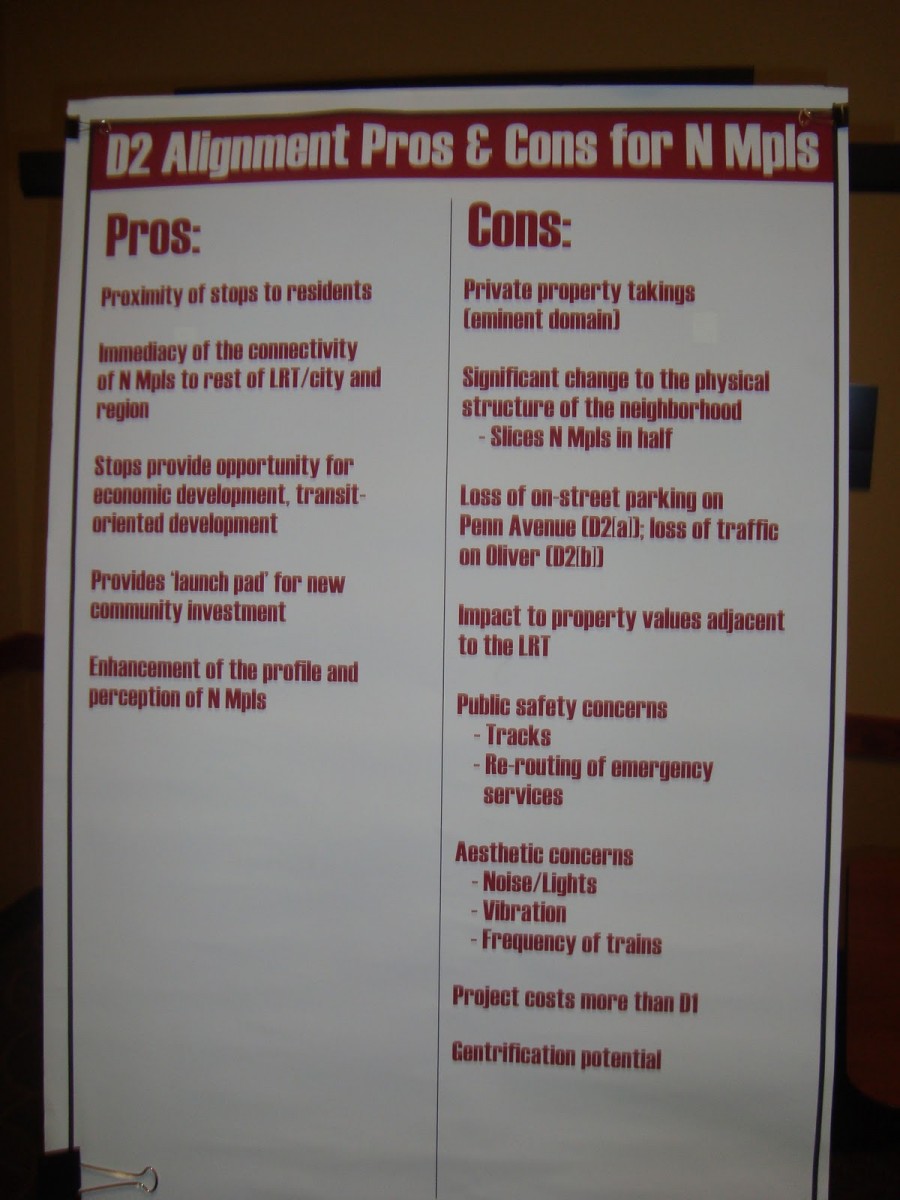 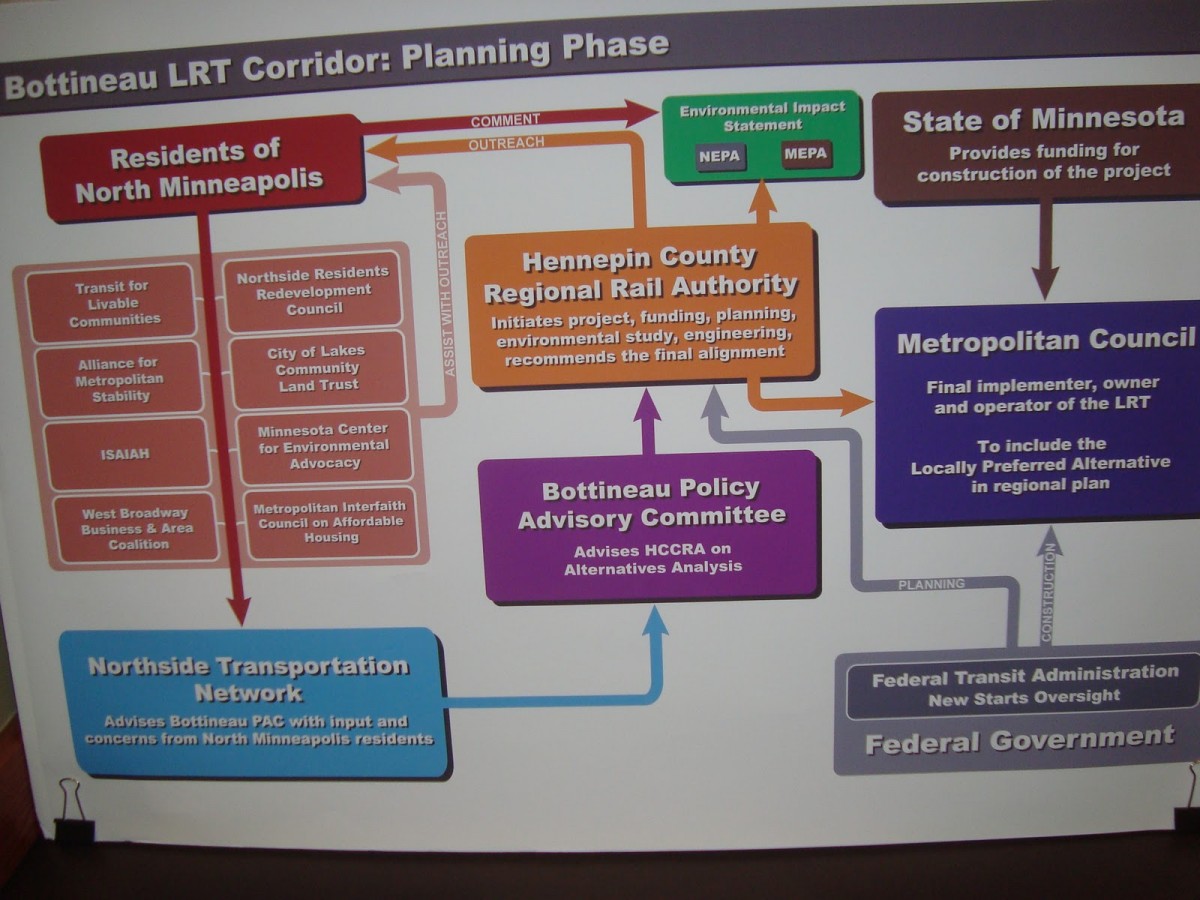