It’s been nearly six years since I last posted about Minneapolis’ plans for a streetcar revival, but except for a short park ride at Lake Calhoun, no trolleys are clanging in the Mill City. These things take time. 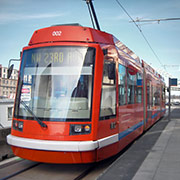 A century ago, Twin Cities newspapers heralded the imminent construction of a subway line between St. Paul and Minneapolis. Obviously, that didn’t happen. Next year, finally, the Metropolitan Council’s Central Corridor light rail project will link the downtowns with trains running above ground.

Meanwhile, both core cities seem to be getting serious about establishing modern streetcar service in selected locations. With tax-increment-style financing authorized by the state, Minneapolis hopes to begin laying a 3.5-mile starter segment along Nicollet and Central Avenues by 2015. Running from Lake Street to S.E. University Avenue, it’s estimated to cost $35 million to $50 million to build. Outgoing Mayor R.T. Rybak said he will do “everything possible to deliver a financing plan” by the time he leaves office at year’s end.

St. Paul is getting on board, too, conducting a feasibility study through the end of the year. This early planning stage is devoted to identifying corridors with the best streetcar potential and prioritizing where to start. Financing plans will come later.

Working streetcars haven’t been seen in these parts for nearly 60 years, since the old Twin City Rapid Transit Co. burned some, sold some to other cities and replaced them with buses. Similar changes occured across the country in the 1950s and ’60s, leaving only a handful of legacy rail transit systems such as San Francisco’s cable cars in operation.

Starting in Portland, Ore., in 2001, however, a growing number of U.S. cities are bringing back sleek new versions of bygone trolleys. The list includes Sunbelt cities Charlotte, Dallas, Fort Lauderdale, San Antonio and Tucson as well as rustier places such as Baltimore, Cincinnati and Kansas City.

“Suddenly streetcars … are among the hottest and most coveted components of public transit’s future,” Jeff Turrentine blogged at OnEarth.com. “What big city in America wouldn’t want to inject just a little of San Francisco’s charm or Portland’s uber-hipness…?”

He also noted the amazing economic boost Portland got from its $103 million downtown trolley: $3.5 billion in private residential and business development within three blocks of the tracks, most of it dense and mixed-use. This has helped cut area residents’ carbon footprints to barely a third of Portland suburbanites’.

Turrentine, however, is no full-bore believer in streetcars.

“Streetcars can’t transform the cultural character of a city or single-handedly pull one out of a national recession,” he added. “And unless they’re structurally connected to a much larger and thoughtfully administered mass transit system, they can’t even make much of an impact on greenhouse gas emissions or climate change. But if they’re done right, they can leverage their unique attractiveness to get people out of their homes and into stores, restaurants, cafes, sports arena — or even offices — without having to get into or out of their cars so many times.”

This is a worthwhile goal, as well as a powerful magnet for “creative class” folks yearning to breathe car-free. Minneapolis and St. Paul already have attracted lots of these economic dynamos, and many of their historic neighborhoods can match America’s coolest urban locales.

With smart planning and sensible financing such as the “value capture district for transit” newly passed as a pilot project for Minneapolis by the state Legislature, the Twin Cities can grow economically stronger, environmentally sounder and culturally more alluring with a return to streetcars as part of a comprehensive 21st century transit system. Here’s hoping we’re not in the 22nd century before it happens.