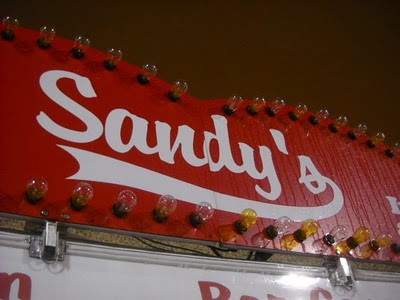 Sandy’s, a food stand which often sets up shop in front of Cub Foods in North Minneapolis, has reportedly been granted a street vendor license by the City of Minneapolis and — at some time in the foreseeable but more temperate future — will be setting up shop in the vicinity of the Gay Nineties Bar in the Warehouse District.

Sandy’s is known for their Knockout Dog, a hotdog with enough fixings to outfit a small salad bar, and incredible specials like barbecued pork on a bun — TWO FOR TWO DOLLARS.

The granting of street vendor licenses has been much anticipated, and much written about in the media, as Minneapolis strives to become more cosmopolitan, urbane and just plain delicious.