When Joel Karsten was just a kid on his father’s farm, he began to notice weeds growing out of some of the discarded straw bales. When Karsten asked his father why this happened, his father told him moisture most likely began decomposing the straw, and not to worry about it because they were worthless.

But the image stuck with Karsten even after he had left the farm and graduated from college. Then when he got a house in Roseville, and planned to start his own garden, he realized he didn’t have enough topsoil to adequately grow anything. Again, his mind went to the straw bales and the weeds growing from them. After some trial and error, he discovered not only could his vegetables grow out of straw bales, but most of them were growing even better in these bales than they would be in soil.

Now, Karsten is helping others learn the process, which he says is easier, more time-saving, and less spatially restrictive than conventional gardening.

On April 27, Karsten held his first Straw Bale Gardens Education Day. More than 300 people attended to hear Karsten speak on the subject and pick up starter kits for sale to help them begin straw bale gardening themselves. The kits ranged anywhere from $95 to $300 and contained 5-20 bales of straw, along with T-posts, wire, potting soil for transplants, and fertilizer. 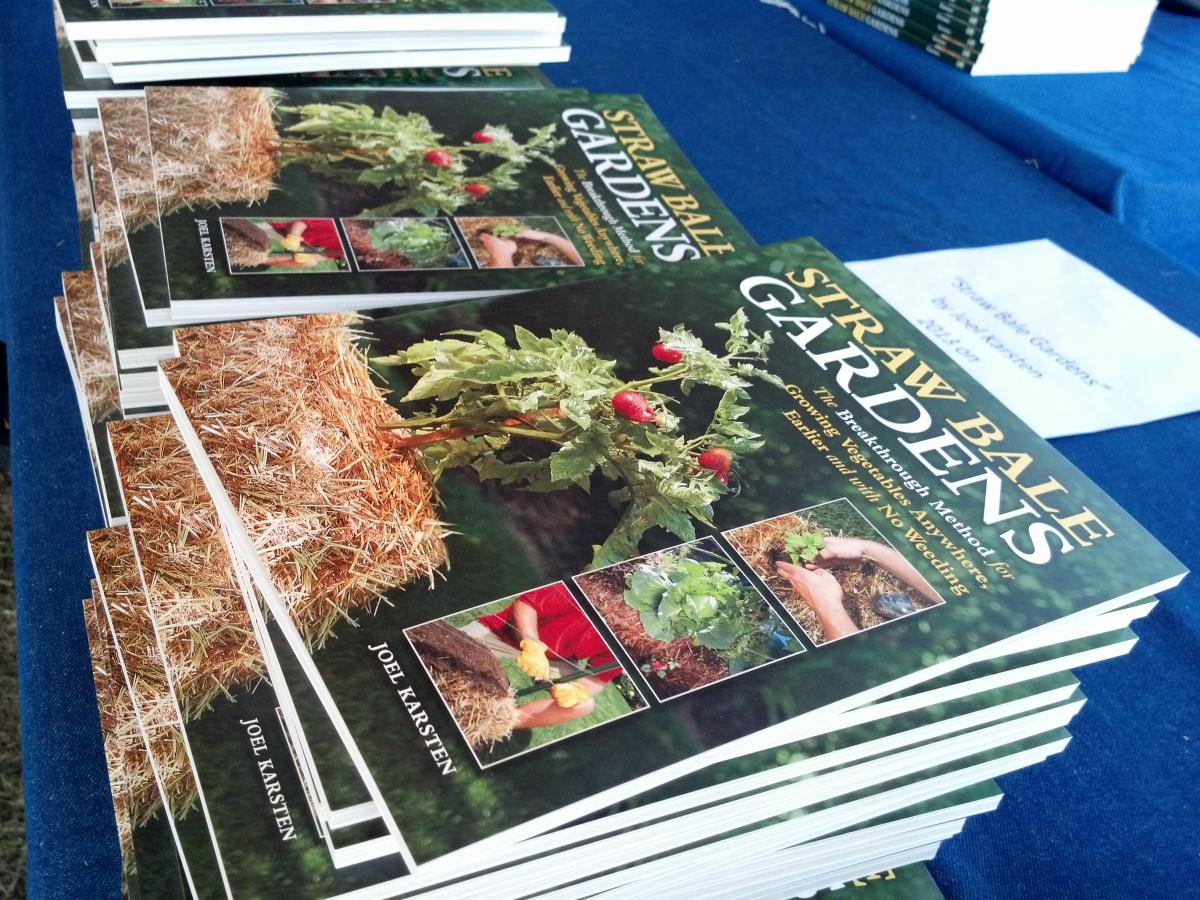 Karsten also signed copies of his new best-selling book Straw Bale Gardens which climbed to number 30 overall on Amazon’s best seller list two weeks ago. In the book, Karsten explains how he came to discover the gardening technique, as well as the many advantages he claims the technique has over conventional gardening.

Just what are these advantages? Karen Torbert drove up from Slayton to see if straw bale gardening would be an appropriate solution to the rabbit and deer problems she faces with her garden back home, she said. Torbert and her husband built a raised garden platform to help prevent animals from eating their plants, and she said she’s hoping straw bale gardening will help to keep the plants out of the animals’ reach.

Heidi Wetherall can’t cultivate a garden in her yard in Eagan because of all the utilities underground, she said, but with straw bale gardening she won’t need to do any digging. “This seemed like a great way to get back into vegetable gardening,” she continued.

Steve Rechnagel tried straw bale gardening at his home in Columbia Heights last year and said the endeavor was a great success.

“I have a small lot,” said Rechnagel, “and the soil’s clay and it’s just terrible so we decided to put the bales up.”

According to Rechnagel, he uses 16 bales in his straw bale garden and grows a number of different vegetables including tomatoes, cucumbers, squash and peppers. He was especially happy with the turnout of his tomatoes, he said. “I’m six foot five and I had tomato plants over my head.”

Karsten also explained some other advantages of straw bale gardening, such as no weeding, less disease and insects, and even early growth and harvest due to the warmth produced by the decomposing bale.

“One of the biggest advantages is the bales heat up,” said Karsten. “For us up here in northern climates where it’s so cold late in the spring, it makes our soil, our planting zone much warmer inside that bale. Probably a hundred degrees when you plant on May 15 instead of the soil that’s still 50 degrees. So it makes a really big difference for long season crops like tomatoes and squash and things like that.”

So far, Karsten says the only complaints he has received about his technique are from people who couldn’t grow any plants because they hadn’t properly conditioned their bales — meaning they hadn’t fertilized their bales and then allowed them enough time to properly decompose.

However, with proper conditioning and just a little attention, Karsten says with straw bales, anyone can have a garden.