This post is unlike any I’ve done before because it doesn’t involve a bike ride. Although it veers from the stated goal of the blog, it is related. This post consists of the first part of an interview I did in January 2014 with Donald Empson and his wife, Kathy Vadnais. They are the authors of the book “The Street Where You Live: A Guide to the Place Names of St. Paul”, one of my primary research resources. A sincere thanks to Don and Kathy for their time and support of my project. This interview has been edited for clarity.

Q: How did you get interested in the street names in Saint Paul?

D.E.: “I was working at the Historical Society and number one, I was bored out of my mind, and secondly, everybody at that time at the Historical Society had little projects they were working on of their own. I was looking around for a little project of my own, something I could do a little bit here and a little bit there. It occurred to me, everybody uses these names and no one really knows what they’re about. So I just started. I went down and started looking at plat number one and made a note of where the street name showed up and what happened to it. I spent about two years and I’d go back to the historical society and research it, look up the biographies and so forth.”

D.E.: “This was in the early 70s and I ended up publishing the first edition myself, partly because it was such a local book I figured I could market it as well as anybody.”

Q: What did you do at the Historical Society?

D.E.: “I started as a reference librarian and in the building, we had all these old maps that were scattered around. Every corner had little old maps and so I agitated to form a map library and they got a Bush Foundation grant and they did it. So I was the map librarian. I spent literally nine months just going through the building and collecting the old maps, including some that had been bought back in the 1880s. I mean, these were in drawers and there were these maps from the 17th century, the 18th century that a guy named A.J. Hill had bought years and years ago. It was just an astounding collection.”

Q: What kinds of maps were these?

D.E.: The early ones were of the French colonization of this area. They were very early maps. There were early state maps, some plat maps, city maps and every kind you could imagine.”

Q: How did the first edition of the book do?

D.E.: “It did pretty well. I think we sold 1,000-1,500 copies over time. My father-in-law was a printer. He worked for NorthCentral Printing so that helped a little bit. I got my money back.”

Q: How did you market the book?

D.E.: “I just took it around to all the bookstores and asked them to buy it. This was before the chains, although B. Dalton was there, but they would buy a few. I would try to get reviews in the paper.” 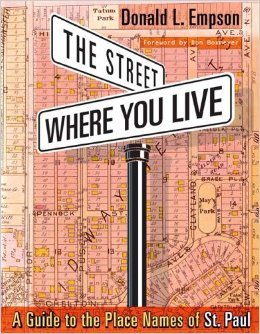 Q: Skipping ahead to the mid-2000s when you redid “The Street Where You Live.” Why did you do a second edition?

D.E.: “A couple of publishers had approached me in the 90s about publishing it but it was one of those things, ‘We’ll publish the book but you don’t get any credit or you don’t get any money.’ And then the Historical Society, they were going to republish it and it got all the way through all their review committees until it got to the assistant director and he decided they wouldn’t republish it.I think it was Larry Millett (who) suggested I talk to University Press about it so I talked to them and they said they’d do it. The book is greatly enlarged, if you compare the two editions.”

Q: Any idea how many copies you sold?

Q: What did you add to this addition that made it bigger (than the original)?

D.E.: “The second version we did all the place names. We did parks, creeks, anything that has a name instead of just the street names. The original book was just the street names. We did some sidebars talking about street pavements, talking about George Harold, the city planner from the 20s and 30s. More of the history of how the City grew like Pierce Butler Route which is really an odd, odd thing. That was the northern route and that’s where George Harold wanted the freeway to go. He said it’s crazy to tear up all these inner city neighborhoods. He said it’s going to decimate the black neighborhoods and with the rigid segregation in Saint Paul there is no place those people can move to. He said, ‘Here we already have the railroad right-of-way and just run it up there,’ but they didn’t…”

Q: How was the route of I-94 finally selected?

D.E.: “Basically, it was MnDOT that laid it out. At that time, all their people were rural engineers; they weren’t used to building freeways through the middle of the city. Their concern was to get what they considered the best route and all the other considerations weren’t really that important.” 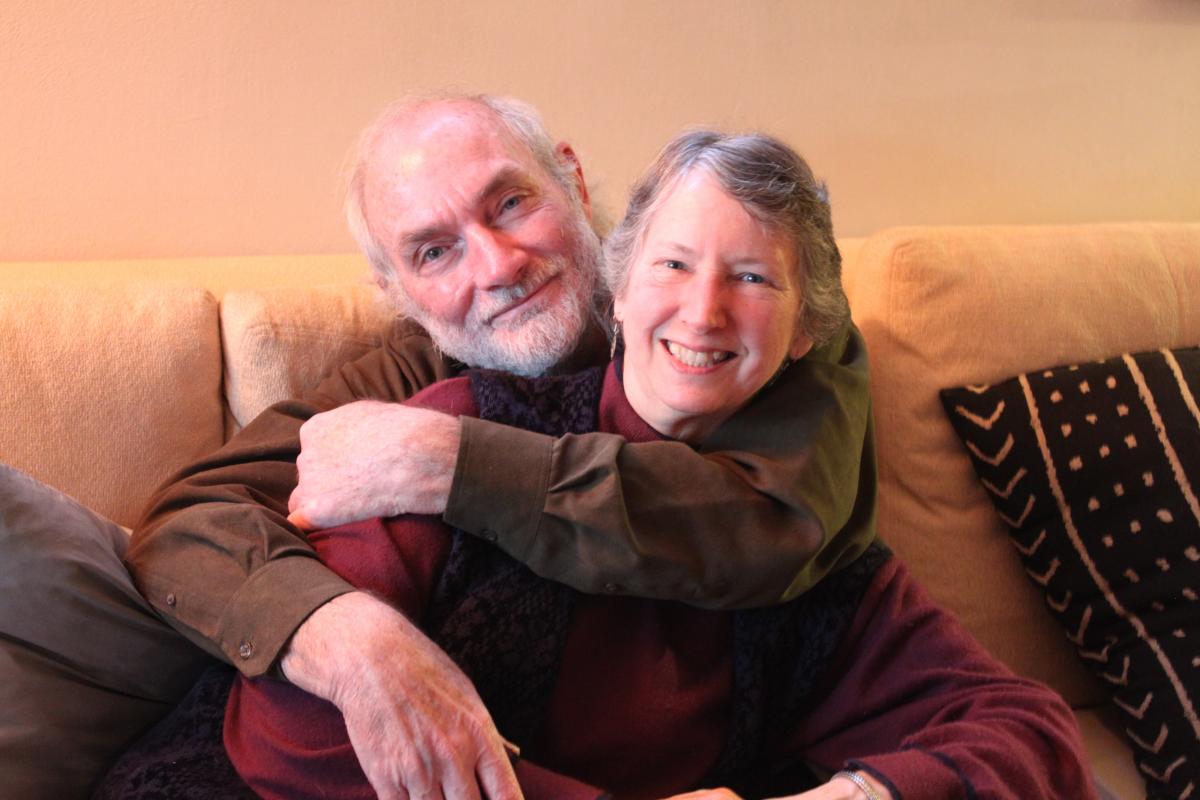 Q: Your wife, Kathy Vadnais, contributed to the second edition of “The Street Where You Live”. Tell me about her involvement.

D.E.: “She was a supporter, chauffeur, picture taker, editor. All the witty things in there she added. We sat down every morning for three, four hours and we rewrote all the entries. She’s an essential part of this. Then I gave her credit on the front cover…”

Q: Did you walk or drive every street?

Q: Why do you find the East side so interesting?

D.E.: “When you look at the old atlases you can see there were a lot of lakes in there. What they would do is get the city to put the street in and they would fill in a little bit along the street and they left the whole drainage area in the middle because the value of the property wasn’t worth filling it all in. So what you get on the East side are these great big blocks with these terribly big lots but only about the first third of the lot is actually useable. The rest is just a lake bed. 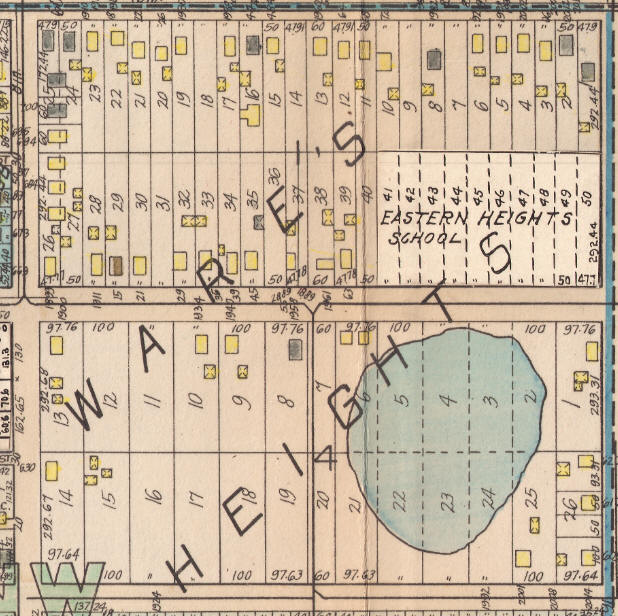 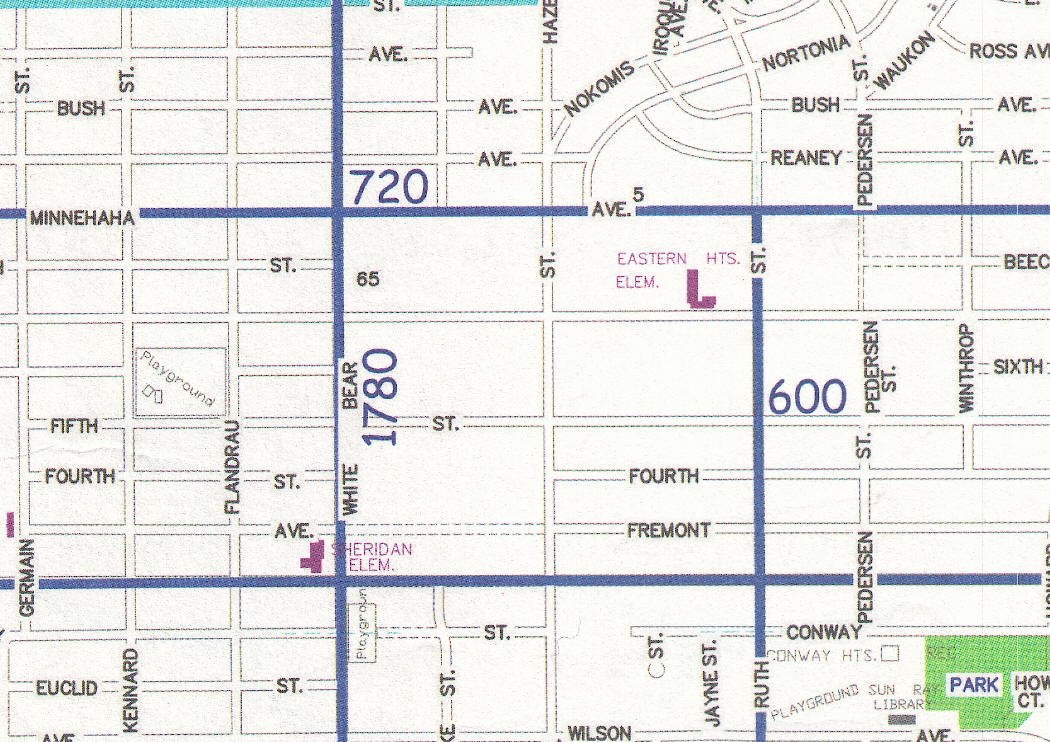 The 2004 City map shows the surrounding area. You can see these couple of blocks, where the lake was prior to being filled, are platted into much larger blocks. Lots are 300′ deep x 100′ wide. 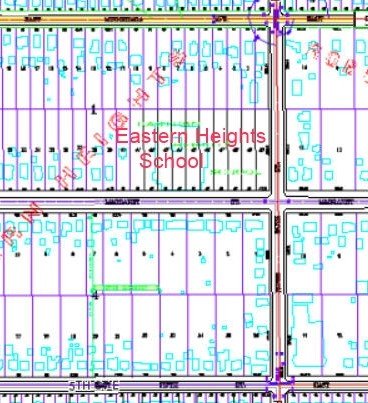 This City of Saint Paul map shows the placement of houses on the lots. The street was built through the former lake bed, and then the area next to the street was filled in for the houses. Notice how they all are close to the street. The bigger lots are 100 feet wide by 300 feet deep. 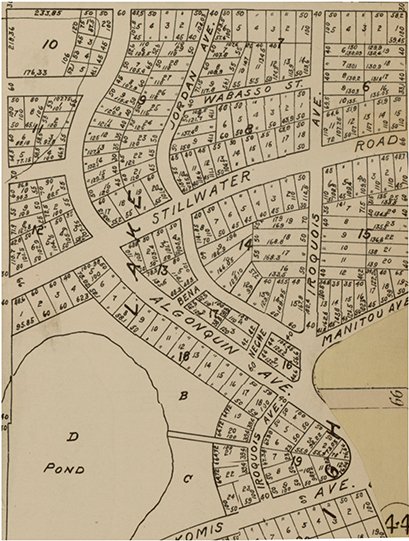 The curving roads of Beaver Lake Heights are obvious in this section of the 1916 G. M. Hopkins map of Saint Paul.

“Beaver Lake Heights is just a fascinating area; little windy streets that go around. All these working-man’s houses that were built in 1917, 1918.”

Q: Are you a Saint Paul native?

D.E.: “I grew up in Bayport and we moved to Saint Paul when I was about starting high school. We lived on Stanford and Fairview.”

Q: Did you live in the West End neighborhood as an adult?

D.E.: “It was a great neighborhood when we moved there in the 90s because there were all these old houses and nobody had any sense they were great and they hadn’t been remodeled, they hadn’t been fixed up. The house I lived in first down there didn’t have central heating. A lot of them didn’t have central heating. You could buy them for next to nothing. It was wonderful historic buildings that hadn’t been mucked up and they were cheap. You had this new group of people that were all dedicated to saving the neighborhood.”

Q: Tell me more about discovering the origins of Saint Paul’s street names.

D.E.: “You look at the names on the plat. You look at the surveyor on the plat. Some of them (street names), especially first names you never do find. Whenever possible I would call the person. Like there’s an Echo Street over on the east side and you think there are all kinds of things Echo Street could be. So I went back and found the developer and I looked at his obituary and I chased his wife down and I called his wife and I said, ‘Why did you name it Echo Street?’ ‘Oh,’ she said, ‘That was my name; Echo Johnson.’

“I called another guy, Snowshoe Lane, and he said, ‘Oh, the City called and they wanted a name and I asked my secretary and she looked up and saw the snowshoes so we named it Snowshoe Lane.’”

The second part of this interview will be posted in the near future. Please visit www.SaintPaulByBike.wordpress.com for other posts.