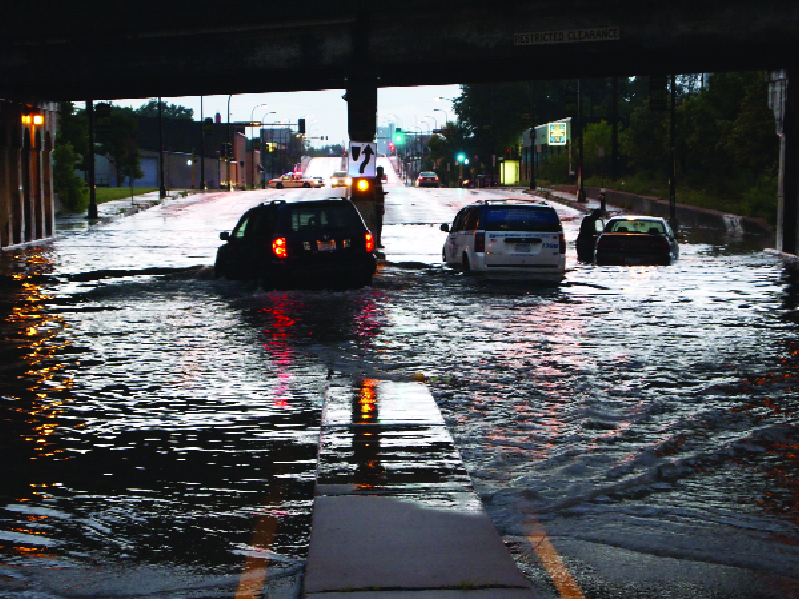 The intense rainfall Friday night, June 21 filled Northeast’s low spots under railroad viaducts south of 18th Avenue on Central (above) and at Monroe in a hurry. Downed leaves and branches clogged storm drains to a point where cars could not safely navigate 18th to the east or even Lowry to the west. (Photos by Margo Ashmore)

Four wire-entangled tree spots in Northeast were among the city’s last to get power restored after the June 21 storms, the Northeaster office’s part of the 29th and Johnson Street corner among them. While the lighted sign at A Bag Lady on the corner and the traffic lights went on first, our building and The Coffee Shop Northeast stayed in the dark until about 1 p.m. Wednesday, June 26.

Like the coffee shops in South Minneapolis featured on television news (those who had power and could watch TV news know what we mean), The Coffee Shop Northeast tried to stay open offering that community/network function. They operated for a while on dry ice, selling only cold drinks and foods that didn’t need heat. Hazel’s across the street provided some storage space in their walk-in cooler. About the time the dry ice was running out, they found and hooked up a generator.

Eventually, the iheartmncoffee. co truck, friends of the owners, showed up and “We used it just to power our brewer and grinder so we could make more iced coffee and have some hot coffee as well. The brewer takes lots of power,” said Rich Horton.

“We didn’t have much for food, except for our bagels and normal pastry order,” he said on Tuesday afternoon. “We stayed open until today at noon. But now we won’t open fully until the power is back. It was getting too hot in there for our employees.” They re-opened for good, Thursday June 27.

At the newspaper, we produced our NorthNews on time over the stormy weekend by setting up office computers at employees’ homes, returning to the office on Thursday June 27 in time to produce this Northeaster. (Thank you to any and all for your patience, our phone router worked but not quite as well as it does when the power is on.)

Minneapolis Park and Recreation Superintendent Jayne Miller estimates the number of trees damaged citywide in the June 21 storms will exceed that from the 2011 tornado in North Minneapolis. 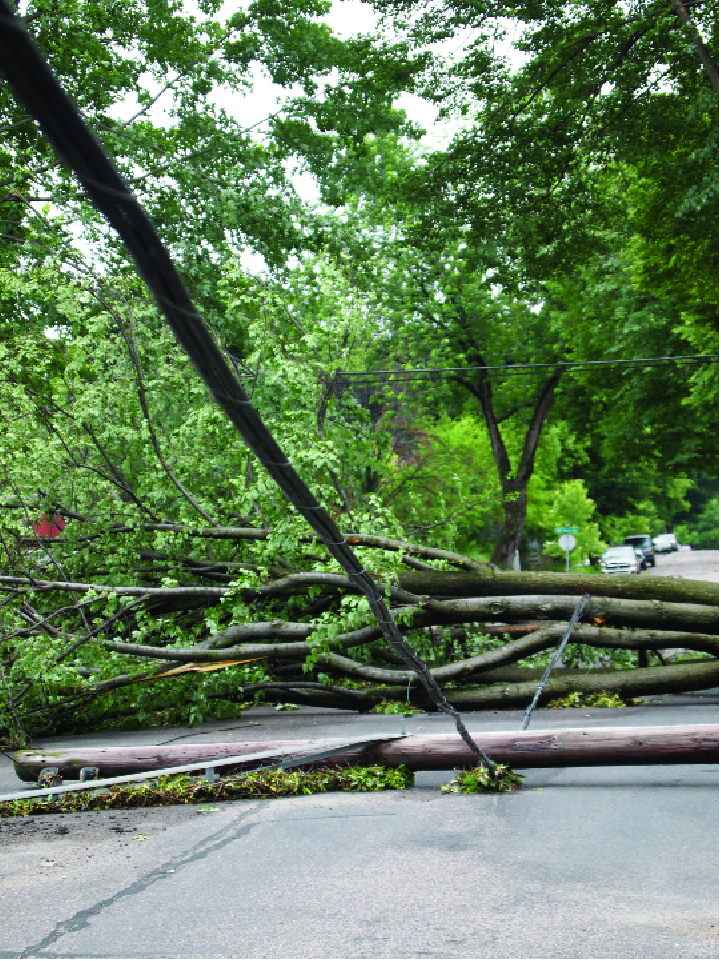 The four last places in Northeast to have trees disentangled from utilities and the power restored were in the 3600 block of Van Buren Street NE and the 600 block of 36-1/2 Avenue NE (photo at left) in the Columbia Park neighborhood, 27th Avenue and Lincoln Street NE, and the 600 block of 24th Avenue NE. There were two spots in South Minneapolis and one in Camden also at the end of the list that was issued Monday morning.

Saturday, June 22, the morning after the big storms, the Northeast Ride launched as planned. Over 100 had pre-registered, and others signed up the day of the ride. They gathered for a pep rally with State Rep. Diane Loeffler and Third Ward City Council Member Diane Hofstede before taking off. We followed along to some of the stops, detouring to photograph storm damage along the way (see inside, pages 8 and 9). 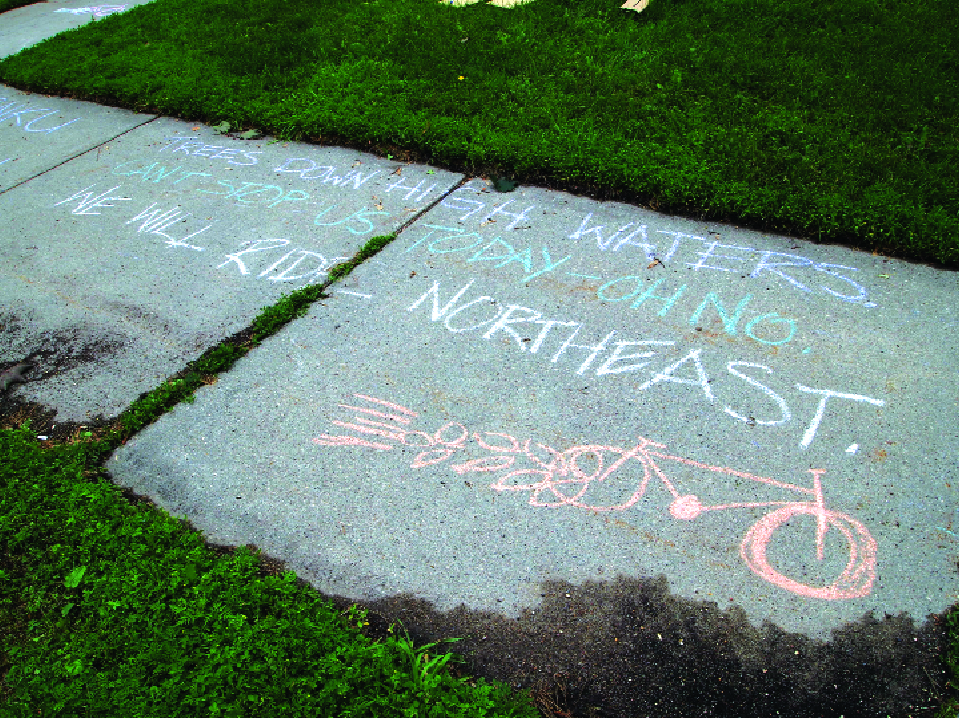 Organizers of the Northeast Ride, a family friendly bike and arts trek that touched every Northeast neighborhood, had spotters along the route calling in a couple of detours that were relayed at the start to most of the riders, who took off in pods of 10 riders maximum. 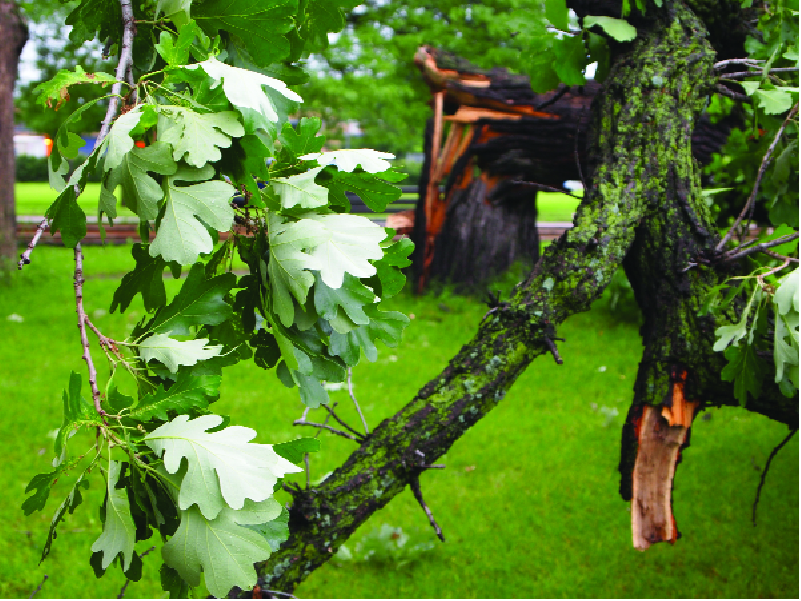 Downed leaves and branches clogged storm drains to a point where cars could not safely navigate 18th to the east or even Lowry to the west. 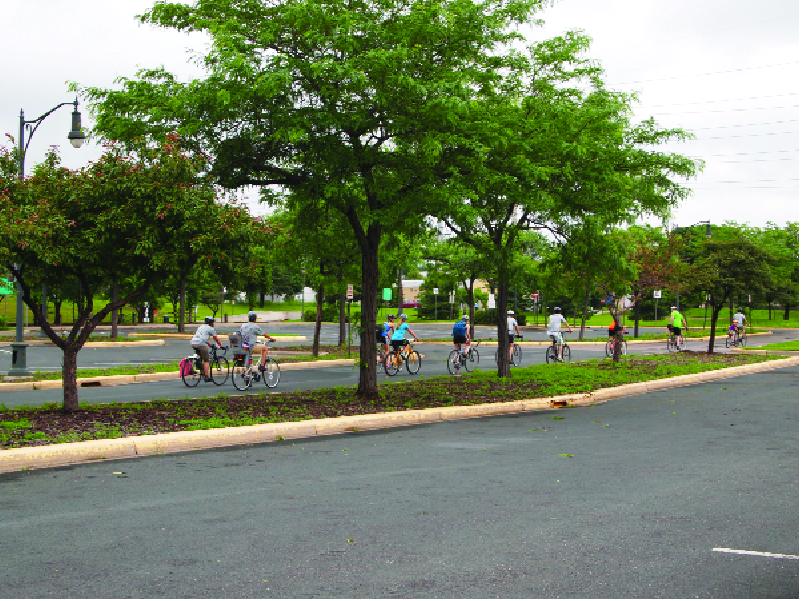 The next day, the Northeast Ride June 22, coordinated by Northeast Community Development Corporation, went on as planned. Bike riders could see some areas untouched by the June 21 storm winds, others required detours and all careful riding due to fallen sticks in the roadways. 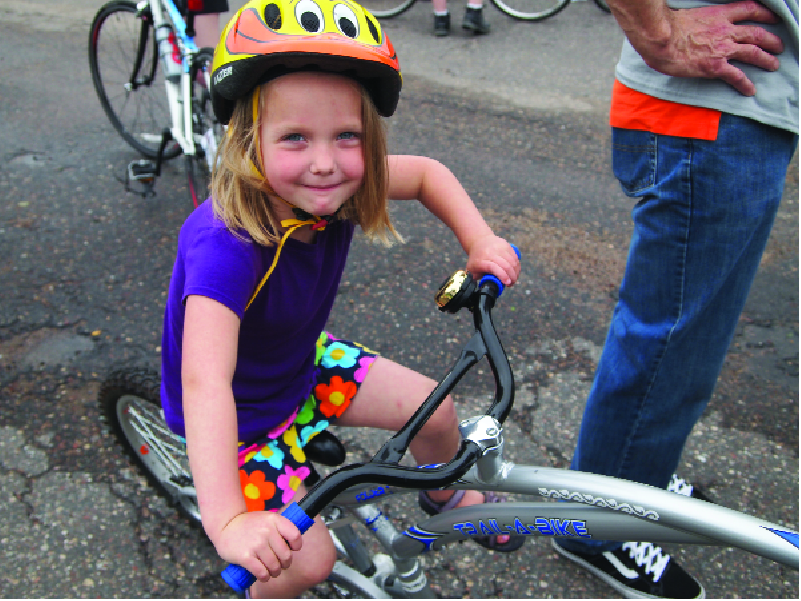 At the start, Sylvie Clark was ringing her bike bell, anxious to get this show on the road. In Beltrami Park at top, a huge old oak fell, and two pines tipped at the roots near the bocce courts.

Riders were directed past JAC Flats, 18-1/2 Avenue and Jackson Street NE, rental housing for artists (page 9). The building, under construction, withstood the storm with no damage but the art-lined fence blew over. It has now been righted but the art removed.