Last week, the Minnesota Department of Human Rights (MDHR), in conjunction with the Department of Human Services (DHS), offered the first in a series of webinars designed to help private employers navigate the new Ban the Box law, which went into effect on January 1st.

The “Box” is the one job seekers must check on an application if they have a criminal record. Banning the criminal history question on job applications ostensibly gives individuals with a criminal record a better shot at finding employment. Employers are still allowed to ask job applicants about their criminal history during an interview or while extending a conditional job offer, but this gives applicants a chance to be considered for their skills and personality. It also allows them to explain the circumstances of their criminal history to the employer if they so choose – an opportunity that isn’t afforded when the question is posed on a form.

Minnesota has actually had a Ban the Box law since 2009, but it only applied to public employers. Over 50 cities and states have similar measures in place, and still others have strict limitations on the circumstances in which an applicant’s criminal records may be considered by a potential employer. But only a small group of states – Hawaii, Massachusetts, Rhode Island, and now Minnesota – require private employers to ban the box.

Addressing this issue through a measure like Ban the Box brings to mind a recent proposal to diversify the Minnesota Department of Health by considering the extent to which life and work experience could stand in for the college degree that is currently a minimum requirement for many jobs. These are both certainly useful strategies, but because they fail to address the root causes of employment disparities, they should only be seen as interim measures. 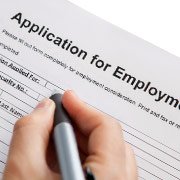 If employers are loath to hire individuals with criminal records, and this has a disproportionate impact on people of color because they are more likely to have a criminal history, we ultimately need to address the factors that lead to higher arrest and incarceration rates for these Minnesotans. Similarly, if the minimum requirement of a college degree compromises workplace diversity because people of color are less likely than whites to have one, we need to work toward closing the achievement gap at all educational levels. And addressing these disparities doesn’t even begin to touch on the reasons for which, all other things being equal, white job applicants are more likely to be hired than black applicants. One study even found that employers were more likely to invite white applicants with a criminal record in for an interview than black applicants without a record.

Stopgap measures have their uses, but they shouldn’t blind us to the deeper problems at play. Inequities and discrimination don’t just go away when we remove the most visible ways in which they manifest themselves.