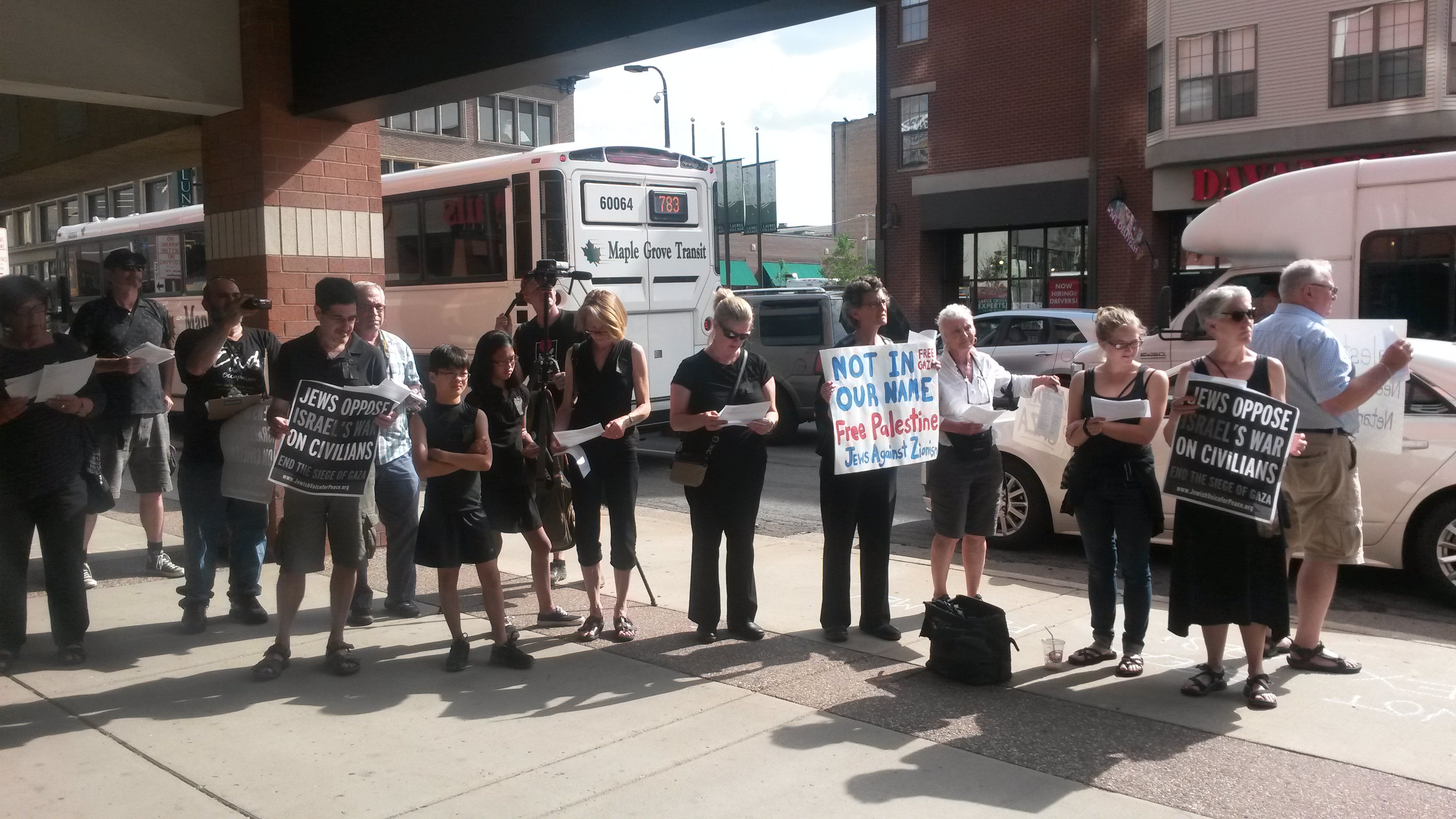 T’sha B’av is the Jewish holiday that mourns the destruction of the ancient temples in Jerusalem and is interpreted to be a day of mourning for all atrocities against Jews. While many American Jews ignore this holiday and its present day significance, Minnesota Jews and friends commemorated the holiday Tuesday with a memorial service for the almost 2,000 Palestinians who have been killed in the last 4 weeks by Israeli bombardment. Calling for an end to the bombardment, ground invasion, and overall siege of Gaza, the memorial service brought together 50 Jews and non-Jews who oppose the relentless attacks on civilians in a space to mourn and pray together. The memorial service was held in front of the offices of the Jewish Community Relations Council to confront how the JCRC portrays Jewish opinion as unanimous in support of Israel. The JCRC is considered to be the spokespeople for the greater Twin Cities area Jewish population and the same people who organized the rally for Israel two weeks ago at a synagogue in Minnetonka. The service in front of the JCRC demonstrated that there are many Jews in Minnesota who oppose Israeli state violence against Palestinians, who want to make clear that the JCRC and other pro-Israel and pro-war Jewish institutions and public officials do not speak for the entire Jewish community. Many participants in the service also oppose the JCRC’s conflation of Judaism and Zionism, arguing that Zionism not only creates ethnic supremacy of Jews over Palestinians and others, but that it also creates a Jewish loyalty to racism and imperialism that is the moral demise of the Jewish community.

While the Israeli government announced its troop withdrawal from Gaza just hours before the service, the devastation remained immeasurable and the need for mourning did not change. In addition to the 1,962 people killed, almost 400 of whom were children and 70% of whom were civilians, 10,000 have been injured and over 100,000 people have been displaced from their homes in the last month alone. The current conflict stems not from rockets being launched from Gaza into Israel but from the strangling blockade that Israel has imposed upon the people of Gaza, restricting movement, commerce, and critical supplies for 7 years now. The besieged population have little means to resist and are completely unable to hide or escape from the incredibly devastating force of Israeli attacks, as Gaza is completely locked off on all sides, essentially an open-air prison.

Jessica Rosenberg, rabbinical student at Reconstructionist Rabbinical College in Philadelphia, led the prayer service as a call to mourn and a call to action. Rosenberg commented, “We know that only by holding Israel accountable to international law through campaigns to boycott, divest from, and sanction Israel will we see an end to the siege of Gaza, an end to the Israeli occupation, and permanent justice and peace.” Tuesday’s service included a reading of the mourner’s kaddish, lighting of yartzeit candles, ripping clothes as is traditional in times of mourning, and the reading of poetry by Palestinians in and outside of Gaza. In the middle of the service, participants read aloud at the same time the names, ages, and cities of the 1,962 Palestinians who have been killed in the last month, creating a cacophony of crying voices and shouts that gave reference to the chaos and extreme violence of these recent attacks. The group of 50 that mourned together Tuesday, and the hundreds more in the general Twin Cities area, remains committed to remembering and uplifting the lives of those who were murdered in these last few weeks in the many weeks to come, and will condemn every instance in which the JCRC and other pro-Israel institutions use the name of Jewish safety to justify war crimes against Palestinians.