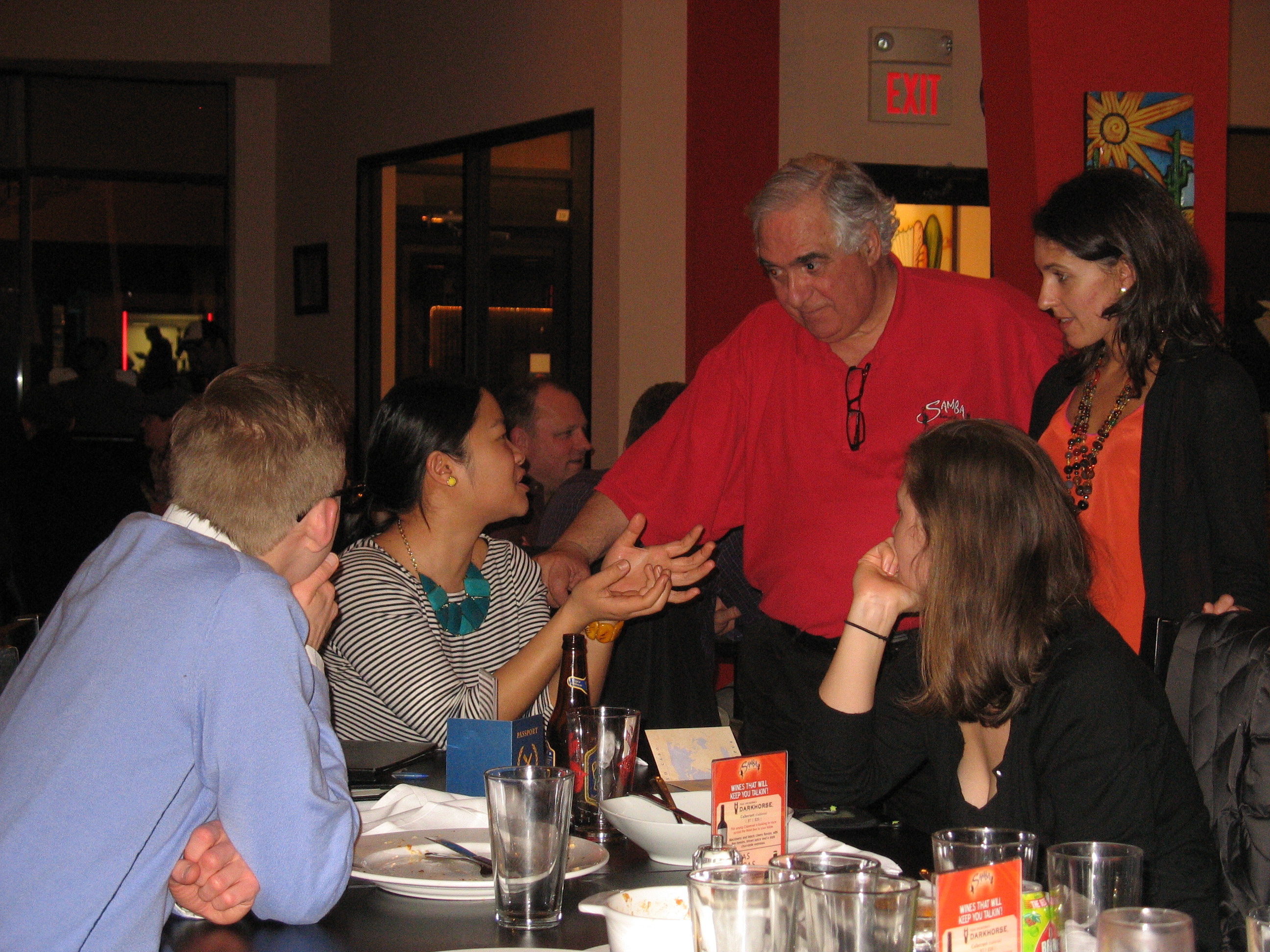 United Foodies of Minnesota speaking with Samba Taste of Brazil owner, Jose Luiz Pantano, and his daughter, Alessandra Orthey on Stop #3 of the tour "Around the World in the Twin Cities."

“Sake?” questioned one of the passengers on our trek Around the World in the Twin Cities.

“Yes, sake is very common in Brazil,” said Jose Luiz Pantano, owner of Samba Taste of Brazil in Hopkins, “You see, there are many Japanese in Brazil. Many influences in Brazil.”

The variety of influences in Brazil was immediately apparent as the United Foodies of Minnesota sat for drinks and food on stop #3 of our tour. First, we were serenaded by Sergio Rosa, who entertains Samba diners on Friday and Saturday nights with a fusion of both bossa nova and Beatles music. Then we tried caipirinha de sake, or sake with crushed lime and sugar—a delightful blend of Japanese and Brazilian flavors.

The word “caipirinha” comes from “caipira,” or a person from the country. Thus, caipirinha is a diminutive meaning “little person from the country.” Caipirinhas are believed to have been invented by the indigenous people and slaves of Brazil. Many slaves worked on the sugar cane plantations. The fermented liquid leftover from the sugar cane process was known as “cane wine,” or “cachaza” in Spanish. Jesuits called it “augoa ardente” which means “water that burns.” In Brazil, they simply refer to it as “aguardente.” Cachaza was used to feed animals or given to slaves, who mixed it with fruit juice, usually lime. This mix was used for parties and religious ceremonies–and thus the caipirinha was born. Now, you can find caipirinhas using a variety of different fruits (caipifruta) and made with either cachaça, vodka (caipirosca), or sake. 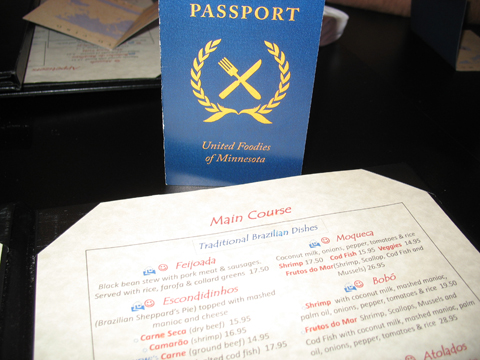 We kicked off our meal with pastel, or Brazilian empanadas. The origin of pastel is a mystery. Most people think it originated when the Japanese immigrants adapted Chinese fried wontons to sell as snacks at the street markets. Others believe that they came from the fried calzones brought over by Italian-Brazilians, or were adopted when Indian samosas became part of the Portuguese repertoire.

After pastel and pão de queijo, or cheesy bread buns made with starchy cassava root paste, we tucked into my favorite entree, moqueca (pronounced “mo-KEH-kah”). Moqueca is a slow-cooked seafood stew made by Brazilians for at least 300 years. The stew usually consists of fish, onions, garlic, tomatoes, and cilantro. It’s nice and thick because water is normally not added to the stew.

Samba makes its moqueca with coconut milk, which is in the traditional style of Bahia, a northern state in Brazil where African cultural traditions are most prevalent. The influence of African culture in Bahia is evident by the bright orange palm oil, called dendê, that they also use in their moqueca. In fact, the etymology of the word moqueca dates back to an African word, mu’keka, which means “fish chowder” or “fish stew.” 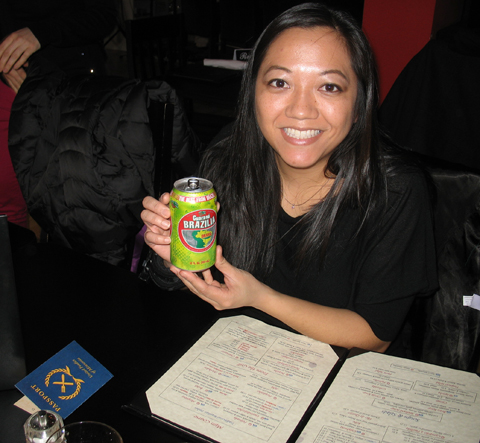 Dendê and coconut milk are also traditionally used in the other dish we tried and loved, bobó de camarão or shrimp bobó.

“My personal favorite is the bobó,” said Pantano, “It’s a lot of flavors with the shrimp, tomatoes, peppers, and manioc with cream.”

Bobó has a similar flavor to moqueca, but was thicker in consistency because it included the purée of manioc, or cassava. Bobó is almost identical to ipetê, a West African dish made of yam purée instead of manioc. The word, bobó, means “a dish made with beans” and comes from the language of the Ewe people who came to Brazil as slaves from what is current day Ghana, Benin, and Togo.

Samba’s menu features food from all over Brazil, including many pizza and pasta dishes influenced by the Italian-Brazilian population.

“We present the most typical foods of Brazil at Samba,” said Pantano, “Homemade food. Not prepared in advance. It is prepared and made to order. From Portugal, Spain, Germany, Africa, and Japan. Like sake. Why use sake? Is there sake in Brazil? Yes, there’s a lot! Everything contributes to our food. One guy asked why we have pasta. Why not? It’s in Brazil! There are a lot of influences from a lot of countries. We try to pick dishes that are family recipes. And before we put it on the menu, it must pass through me and and my family.” 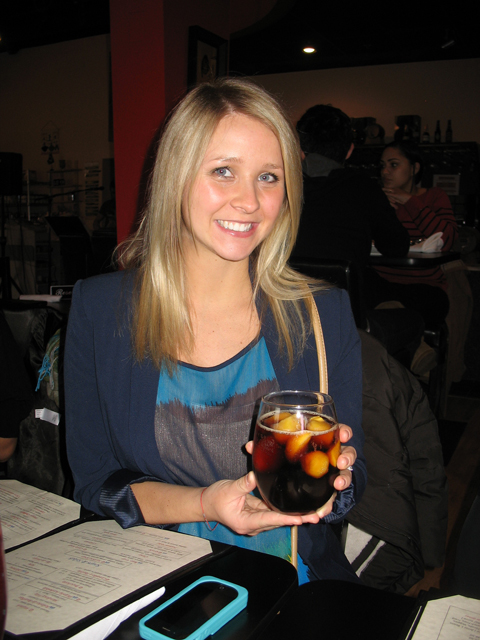 Samba is truly a family-run business.

“The whole family helps out,” said Alessandra Orthey, Pantano’s daughter, “My brother, Gabriel, is one of the owners and chef. Victor, my other brother, works every Friday as a waiter. And I fill in whenever they need. I also helped decorate a bit, and I give suggestions on the menu. My mom takes care of the grocery part and lately has been waitressing too.”

About 21 years ago, Orthey moved from Rio de Janeiro to Minnesota so she could study English in a six-month program at Hamline University. She was only 17 at the time and barely spoke English. Orthey liked the United States so much that she stayed and ended up marrying Chris, a native Minnesotan. Her brothers came two years later and her parents followed so they could be near their kids and grandchildren.

“My parents used to have a store called Brazilian Connection. It started from their basement and soon they moved to Hopkins. After a few years of a successful store, they decided to open the restaurant,” said Orthey, “They love to cook, love food, and by then many Brazilians begged them to open a restaurant with our typical food.”

Pantano estimates that there are about 800 Brazilians spread around the state.

“Every year around Carnival time we have a big party and then we see many Brazilians,” Orthey said.

Pantano also celebrates the holidays by trying out new items on the menu.

“Mother’s Day is coming and I’m thinking of creating a new dish for a special,” Pantano said, “If it goes well then we’ll put it on the menu permanently.”

Yet another reason to return to Samba in Hopkins! 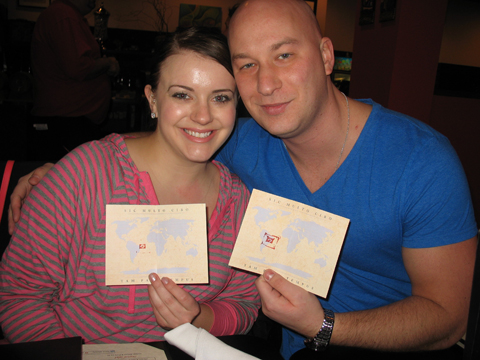 Read reviews of Samba by Jeremy Iggers and Amy Rea.