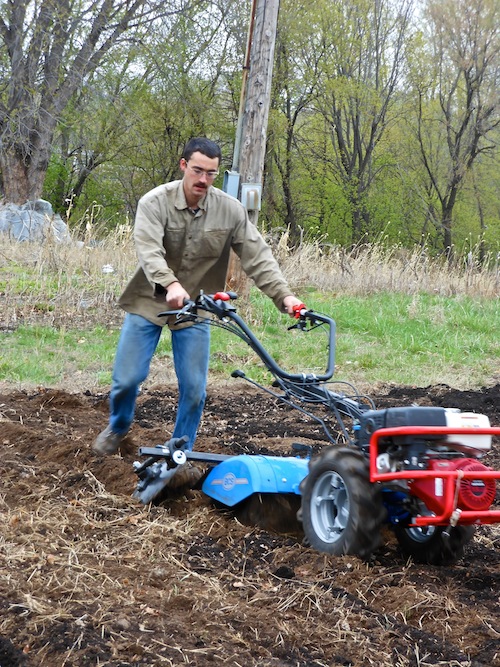 “This is a giant cement square!” Xavier, 8, leans on his shovel, delivers his assessment, and turns back to loosening soil from the old foundation. He’s the youngest of a crew of a dozen or so helping Stone’s Throw Urban Farm prepare a field at 391 W. Maryland in St. Paul. The commercial farming enterprise works land in both Minneapolis and St. Paul. Xavier’s task mirrors the urban farming mission — making a place for planting along the edges of the built environment.

It’s Saturday, March 31. The mood is buoyant. Warm weather gives the planting season a jump. Forty cubic yards of compost, delivered by Organic Technologies last fall, has waited against a tree on the edge of the plot. Now, a yellow wheel-barrel carries fudgy scoops of decomposed leaves to be pitchforked onto newly turned ground.

Nate Schrecengost, 29, pulls the ignition cord. The Italian BCS tiller rips to life. “This tiller can do all kinds of things,” says Nate. Hilling the beds to a uniform width readies the dirt for the fine seeds of salad mix. They may plant it today. Nate surveys the scene with a blend of eagerness and patience. He has been at it since 5:30 a.m. His day began in his garage, fashioning tiller shims from an old license plate.

Nate worked this parcel last year as part of Pig’s Eye Urban Farm. This year they joined Uptown Farms, and Concrete Beet Farmers to form Stone’s Throw Urban Farm. The pioneer operation, Uptown Farms started cultivating vacant lots in South Minneapolis four years ago and has been selling greens, root vegetables and peppers at Mill City Market. Concrete Beets tilled property in Minneapolis’s Phillips neighborhood last year, where they grew bull’s blood, ace and cylindrical beets. That last variety is popular with chefs, but the bane of farmers. According to a grower, “They rarely size.”

Land is leased from businesses and non-profits. “Individuals, banks, development companies, we find the lot and find out who owns it,” says Eric Larsen, 26, who has been hauling busted chunks of rubble. He takes off his work gloves and wipes his palm on his jeans before offering a hand in greeting. They favor corner lots on east/west streets, with few trees, access to water, and supportive neighbors. They chose not to pursue a location when one neighbor objected. Stone’s Throw Urban Farm executes formalized leases with landowners. Work pays the rent. It’s a year-round commitment Eric says, “The owners benefit by not having to keep up with the shoveling in the winter, or mowing in the summer.” 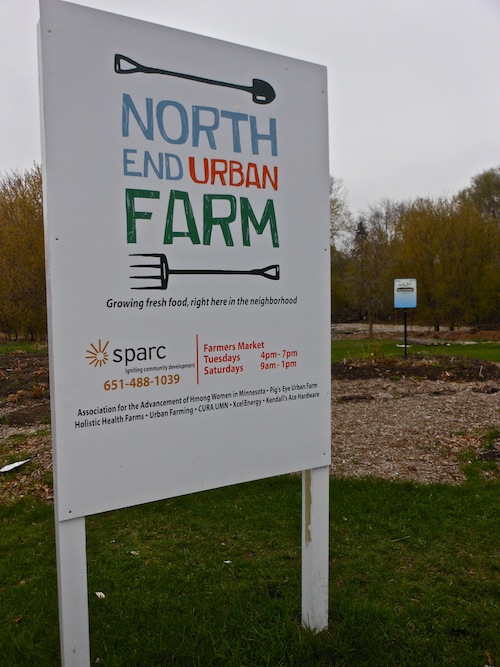 The field they are working today is one-third of an acre. Half will be planted with onions. It is part of North End Urban Farm, a three-acre parcel owned by the Rice Street urban development group, Sparc. The property was assembled in 2006. When plans to build townhouses fell victim to the housing crash, the land sat empty. Until the real estate climate improves, Sparc decided to use this property as a business incubator. They looked for growers who wanted to make it a business, according to Sparc Associate Director Allison Sharkey. Holistic Health Farms and the Association for the Advancement of Hmong Women in Minnesota are the other organizations using the Maryland Avenue land.

Tim Page, 49, and Cherry Flowers, 50, of Holistic Health Farms aren’t working their section this Saturday morning. They’re manning a booth at the Community Gardening Resource Fair at the Wellstone Center in St. Paul. Working with youth from North Minneapolis, Holistic Health tends property in both cities. Cherry’s ringlets bob as she describes Holistic Health’s new aquaponic undertaking, raising ornamental koi fish. Tim grew up on a four-generation family farm in Arkansas. He says he returned to gardening “to relieve the stress of working for non-profits.” He led 4-H Clubs in Hennepin and Ramsey County. Health projects on second-hand smoke and obesity progressed naturally to healthy eating and growing food locally.

The public policy climate seems to be shining on urban farming this year. The Minneapolis City Council approved changes to zoning and land use ordinances at their March 30 meeting. Despite a last minute kerfuffle on soil testing and classroom chickens (amendments requiring the former and allowing the later both failed), the recommendations from the Urban Agriculture Policy Plan were unanimously adopted. Updated urban-agriculture zoning revisions will soon be considered at public hearings in St. Paul.

“They’re just catching up to what we were already doing,” says Emily Hanson, 22. Back on Maryland Avenue a small cliff of loam is all that’s left of the compost heap. Emily takes a break from her work. Acknowledging frustration at the length of the process, Emily still gives thumbs-up to the Minneapolis policies. “We’re really excited about being able to sell on site.” The Stone’s Throw CSA will claim a big share of what they grow. Some produce may find its way to restaurant kitchens and the corporate cafeterias of Medtronic and Target. They’ll have a stand at the Mill City Market.

The participants in North End Urban Farm will hold an on-site mini-market on Tuesdays from 3:00 p.m. to 6:30 p.m. and Saturdays from 9:00 a.m. to 2:00 p.m. Look for it in June, on the north side of Maryland, near where Cumberland Street ends.

Xavier seems a mite weary. He had swimming lessons before he volunteered here. But that chunk of cement has been uncovered, broken up and hauled aside. He gives it a last look before heading for his mom’s mini-van and wonders out loud what it once was. Back in the 1930s and ‘40s, Lena and August Grill ran a market garden on this land. A derelict greenhouse stood here when Sparc acquired the property. Perhaps in years to come housing will fill this space. It’s easy to imagine Xavier driving past at that future date and pointing out the place where, when he was a kid, they grew onions and salad greens, and he helped. 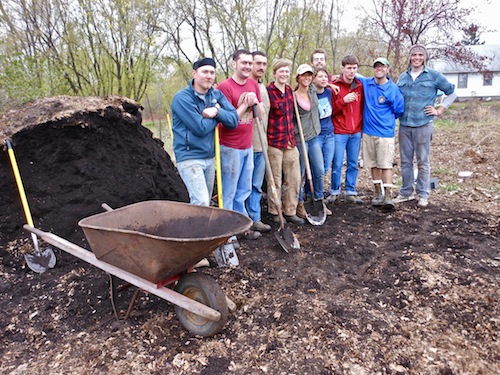