What I’ll tell you at the bar:

Stoker is a twisted film which rewards filmgoers who seek to be challenged, but will frustrate audiences that expect a standard psychological thriller. 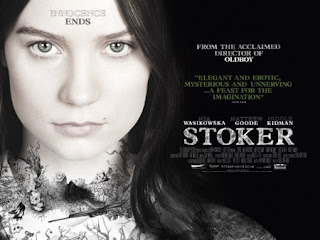 I guess I am lucky when it comes to movie theater seating. The person who will express the loudest displeasure with the film, or the one who will feel the need to announce to everyone in the theater that they didn’t “get it” will inevitably be sitting one row behind me. As the credits roll I wait silently for it. Stoker did not disrupt this odd streak of luck.

“That is not funny, no no,” she said. “That was not the movie I was expecting!” I suspect the funny comment was aimed at me, because I did laugh at things that were likely inappropriate to laugh at. Arterial spray can be a damn funny thing if used in just the right way. Comedy is all about timing. Anyway, I can only guess what movie this woman thought she was going to see. Stoker wasn’t the movie I expected to see either, but I assume my expectations were closer to reality.

In the wake of Richard Stoker’s (Dermot Mulroney) fatal and inexplicable car accident, his brother Charlie Stoker (Matthew Goode) makes a surprise appearance at the funeral and procedes to insert himself into the lives of those survived. The widow Evelyn Stoker (Nicole Kidman) and her daughter India Stoker (Mia Wasikowska) have divergent feelings about the surprise guest. Evelyn’s interest is clearly sexual, the suggestion is that this will be a love triangle murder story. Unfortunately, creepy Uncle Charlie seems more interested in India. India who turned 18 the day her father died.

Things get pretty twisted pretty quickly. India is a bit of an outsider, a teen-ager who can best be described as a mild Gothic Lolita. She’s teased by the jerk boys, she doesn’t seem to have any friends and she enjoys reading about funeral rituals around the world. Her headboard has dragons carved into it. Happily she doesn’t have any Bauhaus posters in her room. This lady has originality. Her interest is so sincere that her slide toward everything Charlie has to offer becomes a rite of passage. She is not bent by the horrors in her house, she is liberated by them.

Mia Wasikowska develops India’s moods adeptly. She’s never innocent, merely defensive and simmering with angst. You know what she is thinking before she says any lines, and every choice she makes has its expression. She brings just enough Tim Burton-esque charm to her goth girl. We know from the start that we are on her side and this loyalty lingers perhaps longer than it should. Maybe we want her redeemed. Maybe we don’t. Either way, everything she becomes defies our expectations.

Evelyn Stoker is a negative space that breathes. She’s defined by what she doesn’t do. Her alcoholism is implied and it’s clear that she was adrift long before Richard died. Her immediate attachment to Charlie distracts from his innate weirdness so much that you wonder who is more damaged. This is a character we’ve seen in many other films, and it is an easy role to blow way out of scale. Nicole Kidman manages it very well, making the cracks in Evelyn’s personality more pronounced by the effort it takes to keep them sealed. Like India, we want her to make the right choice, but we know that this just isn’t going to happen.

There’s no question from the start that there is something wrong with Charlie. His entrance into the story puts him more in the role of watching bird of prey than mourning brother. He looks down on the funeral like a raptor waiting to grab a rabbit in its talons. He clearly has a predillication toward murder, but his motives toward the Stoker women do not appear homicidal. Matthew Goode understands that the audience knows he is the threat, and like Dracula in Bram Stoker‘s novel, his job is to make us be fascinated by him regardless. He brings an oddly detached and murderous glee to every scene, but doesn’t go too far into camp. His delusional confidence is infectious and we understand how India can be conflicted about him.

Though the performances drive the film forward, the written dialogue mostly creates drag. The natural exchanges are fine, but there is a lot of hokey dialogue which is delivered as both homage and alienating device. Much of it is stagey and overwrought, language that is too precious for this kind of film. Coming out of Charlie’s mouth, you can understand why the language sounds so rehearsed, but when Nicole Kidman speaks these lines it feels like we’ve slipped into a self-conscious art film or a satire.

Chan-wook Park brought an elegance and art to the violence of his “Vengeance Trilogy“. These films made it clear that he sees the thriller as more than genre, but as a potent blend of poetry and narrative. He’s not the first, but directors with his kind of vision are nearly as isolated as his characters. This same elegance can be found in much of Stoker. While the canvas is much smaller than the relatively sprawling stories of his Korean films, he finds ways to illuminate the material. Unfortunately, sometimes this doesn’t completely work and these flourishes feel forced and immature. The images come off as art school tricks which look like they were done for their own sake and not inherent to the world of the film. Many of these tricks use unconvincing CGI or compositing effects which don’t really work on screen. One double exposure of India walking through the forest blends with her walking down the street near her home, and it made me wince. Was Mr. Park out of the loop when they added that one?

Screenwriter-Actor Wentworth Miller cites Shadow of a Doubt as inspiration, but the homage goes far beyond that. There are framing compositions which reference films like Shadow of a Doubt, Cape Fear, Night of the Hunter, or Spellbound. This inspiration goes so far that the images as framed as if they were filming in the 1.37:1 aspect ratio of these early films and not the 2.35:1 of Stoker. Strange at first, the effect enhances the disorientation, as if we are stepping into Charlie’s world. You don’t need to know the references for them to work, either, the effect is the same as in the original film.

There’s a lot of good sound work too; the tapping of India’s pencil becomes a percussive theme throughout, the piano work of India and Evelyn that illustrates difference as much as shared talent, and the distinct, stomach turning crunch of a broken neck. Every aspect of this film is charged with tension. Every element pushes us into the tightening knots of the story. We are as much in Charlie’s hands as India and Evelyn.

Stoker offers much to be excited about. The plot is rewarding and challenging to the end. Most audiences will not get the ending they hoped for, but rather the one that lingers as a possibility, a possibility that grows more real as the final moments arrive. Not everybody will go along for the ride, and the self-consciousness of the film will distance them further. Many will see this as an arty mess of a thriller, but this is not really a multiplex movie. This is an adventurous film that got made despite Hollywood, a twist of celluloid lucky enough to be embraced by Ridley and Tony Scott.

Though Stoker refers so much to past master works, it doesn’t get there itself, and loses in the comparison. Hitchcock orchestrated films whose wound up endings were ineveitable and unified. These thrillers worked so well because of what wasn’t or couldn’t be said. That which was unseen was somehow known, as if there was a subliminal track of Hitchcock whispering dark secrets into your ear. Stoker does not have this focus, this unusual clarity. There are too many things happening which work well solo but clash in concert. I don’t know why this happened, but I do know that Stoker could have been a better movie if the filmmakers recognized the movie they made and forgot the movie they anticipated.