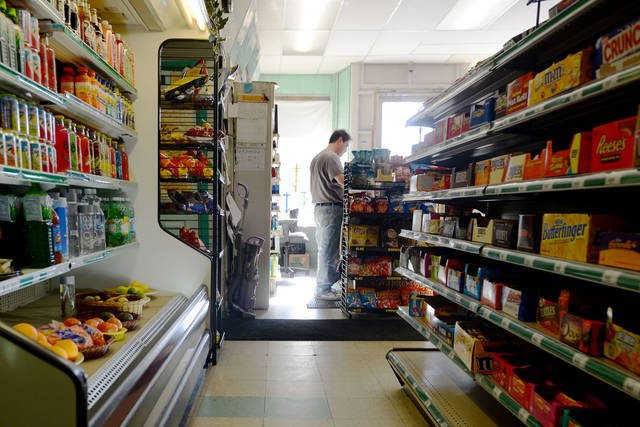 (Photo by Elizabeth Brumley) Owner Abed Hassuneh works behind the counter at Santana Foods Monday. Santana foods sells some staple foods, but the Minneapolis City Council is considering an updated grocery store ordinance that would mandate an increase in required staple foods carried in stores.

More fresh fruits, vegetables and other core food items may be coming to Minneapolis corner stores this spring.

Six years after Minneapolis became the first city in the country to make stores stock staple foods — which include cheese, milk and whole grain cereal — the City Council is considering a proposal that would mandate minimum requirements for stores carrying these foods.

While researchers and Minneapolis officials are hopeful the measure will improve residents’ overall health, some business owners and city leaders say the requirements may be difficult to meet.

The updated staple foods ordinance would require grocery stores to stock certain amounts of produce, proteins and dairy products, among other obligations. The amendment would also redefine which stores are exempt from the policy.

The changes would bring healthier food to areas that don’t have easy access to grocery stores, said Ward 2 City Councilman Cam Gordon, who authored the proposal and represents the University of Minnesota and surrounding areas.

As city law stands now, stores aren’t required to carry any juice products, but the new amendment reverses that. Also, the current form of the rule doesn’t include minimum quantities for food.

Abed Hassuneh, owner of the Santana Foods deli and grocery store in the Marcy-Holmes neighborhood, said the changes would pose challenges.

If the amendment passes, he said, the store might have to operate as just a deli.

“At that point, we’d probably have to dismiss the grocery license,” Hassuneh said.

Gordon said it may be difficult for some stores to comply with the stricter guidelines.

“There might be unintended consequences in lost revenue,” he said.

But Gordon said a survey completed earlier this year found that a large number of stores already meet the proposed requirements.

Stores would be exempt from the requirements if they sell staple foods as a supplement to their primary business, or if they sell only specialty foods and don’t accept federal benefits like food stamps.

Around 20 residents and community supporters spoke at a public hearing at City Hall on Monday before a city committee unanimously approved the proposal.

Around 68 stores in Minneapolis would be exempt, Kristen Klingler, a senior public health specialist for the city, said at the hearing. She noted that about 262 stores, including stores like CVS and Walgreens, would have to follow the new guidelines.

Ward 8 City Councilwoman Elizabeth Glidden said at the hearing that there might be extra stress on the city’s health department staff to make sure stores comply with the new requirements.

“It’s a complicated ordinance from a department that came to us just a few months ago saying that they didn’t have enough staff to meet their existing priorities,” she said.

If the full City Council supports the change to the city ordinance at its next meeting on Oct. 31, the amendment will take effect in April.

Melissa Laska, an associate professor at the School of Public Health, worked with the city on the amendment. She said the first year of the policy’s implementation would, in part, be devoted to monitoring compliance and informing store owners about the new requirements.

The city would not issue any warning letters or citations for stores not abiding during the first year.

Laska and her team have applied for funding to research the change’s impact on Minneapolis communities, pending the ordinance’s approval.

“There could be more vegetables and fruits at CVS or Walgreens,” said industrial engineering sophomore Madeline Hoch. “They go bad in a day, so you can tell they’re not good quality.”

But nursing freshman Brandon Hubbard said he hasn’t noticed a lack of healthy food near campus.

“I always go to Walgreens, and they seem to have enough food,” he said. “But it’s definitely good to encourage people to eat healthier.”