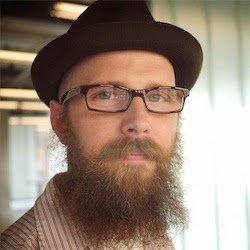 ArtPrize 2014 finalist Steve Lambert, as I reported yesterday, has vowed to give away his prize money—either $20,000 or $200,000—should he win at tonight’s awards ceremony. His interactive mobile billboard Capitalism Works For Me! True/False is shortlisted in the “time-based” category (along with Mel Chin and others). His designated beneficiary: the LGBT Fund of the Grand Rapids Foundation. Here, in an email interview, he shares his rationale.

Paul Schmelzer: Congratulations on being an ArtPrize finalist. Your artwork/billboard/voting booth Capitalism Works for Me could, well, work for you: you might take home anywhere from $20,000 to $200,000. It seems like the perfect venue for the work, as ArtPrize is largely based on a popular vote among attendees. But with 24 hours to go until the winner is revealed, you decided not to keep the money if you win. Why?

Steve Lambert: Thanks. It has not been easy.

The chance to win a prize was not what compelled me to show at ArtPrize. I was curated into a show at the Kendall Museum during ArtPrize which I figured would make for a larger audience of everyday people. I’m excited to have Capitalism Works For Me! True/False shown around the world, especially when seen by non-art audiences—and especially to so many people in Grand Rapids. I believe in the work. And it turns out most of the people at ArtPrize liked the work also. That was great.

Last week I was in Grand Rapids and learned I was on the juror’s shortlist, then shortly after, I was also in the top 25 for the popular vote. While I appreciated the nod, as winning the prize became more real, I started to feel this knot in my stomach. I manage myself well, and I am far from a starving artist, but I still have bills to pay, new pieces I’m working to get funding for, I don’t own a home, etc. In short, I could definitely use the money. Yet, at the same time, I couldn’t imagine accepting the money.

I see a lot of ways I can use the prize to help people in Western Michigan. You know, there’s a lot of hostility in Western Michigan toward LGBTQ rights. Millions of dollars come from that area to fund homophobic campaigns around the country. That money could be helping foster an environment of love, compassion, growth, and support, but instead they fund homophobia, campaigns that hurt working people, and attack public schools.

I won’t have millions of dollars, but I have more than money. With the Center for Artistic Activism, Stephen Duncombe and I have have helped those fighting for equal rights in Russia and the former Yugoslavia – some of the most homophobic places in the world – so we’re prepared for Western Michigan. In that realm, I have something else I can offer.

This award, even if it is the grand sum of $200,000, won’t give me the same platform as any billionaire or millionaire funder, but it gives me another chance to join others and fight back.

PS: A few days ago in an email to supporters you shared that you were “conflicted” about accepting the prize money, should you win.

“The DeVos family, who is behind ArtPrize, are the founders of Amway, have put millions into anti-gay marriage efforts, attacking public schools and teachers unions (I am a member of a teachers union), and support the ultraconservative Calvinist Christian Reformed Church,” you wrote. “ArtPrize is basically the least offensive thing they do and it buffers some of the criticism of the rest of the work the family does.” This reminds me of questions about sponsorship in the arts: are artists sullied when they show at venues supported by corporations they may detest? (Liberate Tate, for instance, opposes BP’s sponsorship of the Tate.)

SL: This is a messy area and there are no clear-cut rules. Because of the lack of public funding for the arts, individual artists have to make these judgement calls every step of the way. It is not easy.

My parents were in the church, but religion for them is teaching of love and acceptance. I was also raised to stand up for what you believe in and help those you see in need. I had to ask myself, how much worse would this have to be for me to say “no thank you.” And the answer was “it’s already pretty bad.”

Great art shifts our perspective on the world. Shows us another way to perceive things, broadens our thinking, and reveals other ways the world can be. It makes us more understanding and empathetic. This is why I am an artist. I want to use the prize money towards this end, and the DeVos’s seem to use their money for the opposite.

PS: Some say Rick DeVos’s politics aren’t as divisive as those of his parents.

SL: I agree, it seems Rick DeVos’s views are not as extreme as his parents’, and especially his grandfather. However, if that’s true, I wish him the courage to be just as outspoken as his family, but on the side of love and acceptance, fighting for working people, ending militarism, and the value of publicly funded education for all. It would be nice to hear from him on that.

In the meantime, when these backward ideas about civil rights and unrestrained capital are over-funded and allowed to go unquestioned and unchallenged, within a family or within our society, it’s unhealthy for our culture and our democracy. So again, if Rick DeVos is really so different, I hope he says something soon.

PS: You tweeted that not only would you be donating your winnings, should you win, to the LGBT Fund, but you’ll also be returning with colleagues from your Center for Artistic Activism to volunteer with them. Is this a critique of modern political “activism” in which we often allow money to stand in for action?

SL: Ha! I didn’t think about it that way, but just giving money didn’t feel right, so I suppose so.

PS: What are your thoughts on your decision in light of the themes of the work itself? Capitalism, we’re often told, is amoral: money is morally neutral. But, for you, this money has context.

SL: It certainly does.

Update: On his website, Lambert offers further explanation, writing (in part): “What bothers me the most is the DeVos family has, for generations, been on the wrong side of the fight for civil rights for LGBT people. And they back their opinions with millions in political money against civil rights. It’s a long story, but the end is: they haven’t changed.”