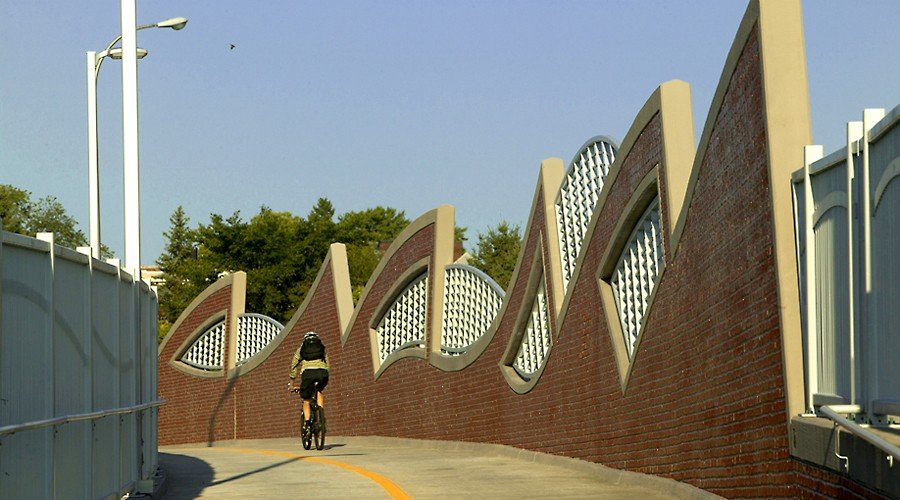 Dear Minneapolis Park and Recreation Board,

Please make your winter trail maintenance plans for the whole City — now, before it’s too late for the 2014-2015 winter season.

I’m hopeful that for me and the hundreds of other year-round bike-commuters who navigate the Hennepin/Lyndale bottleneck using the Loring Bike Bridge, this winter will be a change from the past. However, it’s but one of many bikeways the MPRB is responsible for plowing, and the MPRB’s team needs to catch up to the City of Minneapolis crew responsible for plowing the Midtown Greenway. What they are learning on this bridge needs to be applied throughout the city.

Unfortunately, ever since this bridge was built, when the first snowfall arrives there’s confusion about who is responsible for snow removal. It’s not a surprise — it was built by one entity (City of Minneapolis) on land owned by other entities (under the freeway entrances belongs to MN DOT, there are easements with the churches for the trail) and is maintained by a third (MPRB). Also, it’s not IN a park.

Several years ago, about three snows into the winter, no one had touched the snow. I called 311 to ask the City to plow the trail from Bryant to Loring Park. After a few days, they responded. “The Loring Bikeway isn’t our responsibility. When we built it, we signed a maintenance agreement with the Park Board – call them.”

I called the Park Board, and they said, “That’s not our responsibility, that’s the City of Minneapolis. Call 311.” I explained I had called them, they insisted it wasn’t their responsibility, but agreed to look into it. I also e-mailed people — I didn’t care who, but I had to get to work, preferably without riding through the Bottleneck! I included my Park Board Commissioner, Anita Tabb, and the City’s then-Bike/Ped Coordinator, Shaun Murphy, and my City Councilmember, Lisa Goodman. I figured they would solve my problem. [Pro-tip: use this handy list to figure out who is responsible for your maintenance problem.]

A week later the MPRB sent out a Bobcat. Unfortunately, it was a month into the snowy season. It was a rutted, icy trail with a hairpin curve in the middle of a slope and blocks of icy bike/walk space on a hill. There was no way they could make it rider-friendly. Eventually it melted and I figured it’d be fine the next winter.

I was wrong. Skipping all the details, the same story was repeated the next fall, and the next.

Last year, it only took one snowfall and one call/e-mail to get the crews out. (I still had to insist it was a Park Board responsibility). Having been properly raised by my mom, I sent a thank you note right away.

That’s when I realized that plowing for joggers and pedestrians circling lakes is different than plowing for bikes. In one, your primary goals is to avoid ice. Whether you have clear pavement or an inch of snirt/salt mix doesn’t matter. In the other, the point is avoiding a snowy-slushy mix, especially on corners an inch of snirt/salt mix means no traction for turning or climbing and rider down. My thank you note also asked if they would be open to suggestions on how they could better serve bike riders.

This sludge is impossible to ride through, especially on a sloping hairpin turn

They plowed all winter, thankfully. Awkwardly, though, sometimes they left a ridge of snow plowed across the south end of the bridge — that riders would have to go through or carry bikes over to ride down the Bryant Bike Boulevard. I found I was walking my bike the length of the bridge and daintily navigating the sludge along the churches to Loring Park. When I felt impatient, I took Hennepin/Lyndale, despite the plowing.

While I’m not shy to contact my elected officials, I’m also happy to pitch in and do my part. On a mild January weekend day, I figured it would take less time (and be less frustrating) to go and do it right myself than to walk the bridge every day and to wait for the MPRB to fix it. I grabbed my shovel. Post-shoveling, check out the sand and salt about to be washed directly into the Chain of Lakes This is best-case if the MPRB misses the boat

I want to thank MPRB staff and Commissioner Tabb already. A couple months ago I got a call from the guy who supervises the plowing crew. He asked if I’d be willing to walk the Loring Bikeway with him and talk about how they could do an even better job this year. (We still haven’t scheduled the walk, though.) I’m hopeful that this year, they will finally hit their stride, at least on this stretch.

I’m wondering about their plans for the rest of the city, too. The squeaky wheel gets the grease, and I’ve been squeaking about this route for years. I know my peers use Park Board trails all over the City to get to work. I know they’ve faced similar and other trail-specific — challenges. (For example, the plows in Loring Park often miss the curves in the trail by a foot and my bike tire has found the trail edge by sinking into the snow more than once.) I don’t know if every trail has someone like me, persistently requesting attention.

On the other hand, bike-friendly winter maintenance shouldn’t depend on having someone like me persistently requesting attention.

Here’s my call to action: Minneapolis Park and Rec Board, develop a uniform policy for how to plow bike trails, as well as training for bike-specific plowing.

At top: The Loring Bike Bridge – how I get to downtown and work, especially in the winter. (Image by SEH)