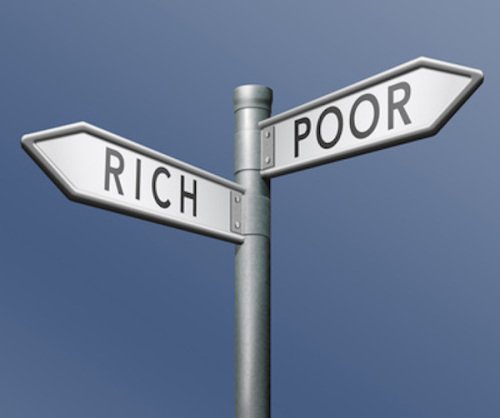 Start poor, stay poor — there are exceptions, but that’s pretty much the rule in America. From last week’s depressing news cycle, some insights on how it works —

“In a nationwide trend documented by the National Law Center on Homelessness and Poverty, a growing number of states and cities have laws on the books that may seem neutral — prohibiting activities such as sidewalk-sitting, public urination and ‘aggressive panhandling’ — but which really target the homeless. (The classic Anatole France quote comes to mind: ‘The law in its majestic equality forbids the rich as well as the poor to sleep under bridges, to beg in the streets, and to steal bread.’)”

In the Washington Post, Matt O’Brien writes that “inequality starts in the crib. Rich parents can afford to spend more time and money on their kids, and that gap has only grown the past few decades.” The inequality continues to play out throughout life. Poor kids who manage to graduate from college do less well than rich kids who drop out of high school, according to O’Brien. Sixteen percent of poor kids who work their tails off and get a college diploma remain in the bottom 20 percent of income.

Chico Harlan reports on the booming retail rental industry in the Washington Post, explaining why the poor in America pay $4,150 for a $1500 sofa. Basically —

“Five years into a national economic recovery that has further strained the poor working class, an entire industry has grown around handing them a lifeline to the material rewards of middle-class life. Retailers in the post-Great Recession years have become even more likely to work with customers who don’t have the money upfront, instead offering a widening spectrum of payment plans that ultimately cost far more and add to the burdens of life on the economy’s fringes.”

And in MinnPost, Louis D. Johnston explains that men without a college diploma face a bad and worsening job market. Nor are they the only ones, as Johnston notes: “The drop during the current recession was especially large, and it hasn’t been followed by a return to earlier levels of employment.”

The good news: unemployment numbers are down, both nationally and in Minnesota, and job growth is up. The catch: even in recovery, the poor are being left behind.