There’s been a lot of good economic news lately, the second year in a row that July uncharacteristically surged ahead. The “ISM Index” poll of manufacturers looked more positive than it has since 2008, even with a strong US Dollar. Initial claims for unemployment fell to 326k last week, another low since 2008. US GDP grew at 1.7% in 2Q13, not exactly great news but far better than expected (and accompanied upward revisions to previous quarters). The ADP employment report showed a net gain of 200k jobs, the rosiest figure of them all. Only 82k of those came from small businesses, with large companies gaining a new high of 60k jobs added – meaning that for the first time since 2008 big companies are in a hiring mood.

By the time you read this, the official Bureau of Labor Statistics (BLS) employment report for July should have come out, and it should be roughly in line with the more smooth ADP figure. Now that we are really turning a corner, as Barataria expected in 2013, it’s time to take an in-depth look at what “employment” means and why there’s still so very far to go.

The best figures on the bulk population are kept by the BLS in conjunction with the Census Bureau. While the monthly ups and downs are subject to a lot of noise, given their methods, their picture is detailed and reliable over the long haul. We can use them to take a moment to see where we stand in terms of jobs, who needs ‘em, and who has ‘em. We can use the June 2013 numbers for this and not have a lot of error, even if their July survey shows a good change.

Population: The overall population of the US is 314M people. But not all of them could reasonably be working. The BLS uses the “Civilian Noninstitutional Population” (CNP) as their baseline, which is everyone over 16 years old that is not in prison, a mental home, or otherwise not capable of working. That figure is 246M.

Civilian Labor Force: This is the number that includes everyone with a job or actively looking for a job. It’s called “Civilian” because it also excludes all military personnel. The total is 156M, or 63.5% of the population (the “participation rate”). It is essentially the CNP less everyone in school, retired, staying home to raise the kids, or in some other way not part of the working population. This is the definition that causes the most debate and it is the baseline for most of the calculations done by the BLS.

Employed / Unemployed: There are two components to the Civilian Labor Force – 144M people are employed and 11.8M are not. The ratio of the two is the headline “unemployment rate” that is reported most frequently. That is known as U3 officially, as it is only one of many measures of unemployment used by the BLS even though it is the only one usually reported.

Employed Part Time for Economic Reasons: Here comes the fudge! Of those employed in the Civilian Labor Force, the BLS surveys those with fewer than 40 hours who would like to work full-time. That stands at 8.2M, or 5.3% of the labor force. This number is worth keeping a close eye on for several reasons. The first is that it’s usually the first part of the employed to go up. Some have predicted this will increase when Obamacare becomes law because companies will have to give benefits to everyone working 30 hours or more. For a number buried in the reports, it’s got heft.

Marginal Workers: There are 2.6M people who are not counted in the Civilian Labor Force because they have not been actively looking for work for one reason or another, but may in the near future. This includes 1.0M “discouraged workers” who are not actively looking for work but would like to have it (and may simply be part of the underground economy) plus 1.6M people who have chosen to go to school or stay at home but could be available for work if needed. Marginal workers are not included in the Civilian Labor Force.

U6: Below is a chart of U6, the broadest measure of unemployment, since it was first tabulated in 1994. It includes Part-Time and Marginal Workers, meaning it uses a broader baseline of “worker”. It stands at 14.3% currently, or about one available worker in 7: 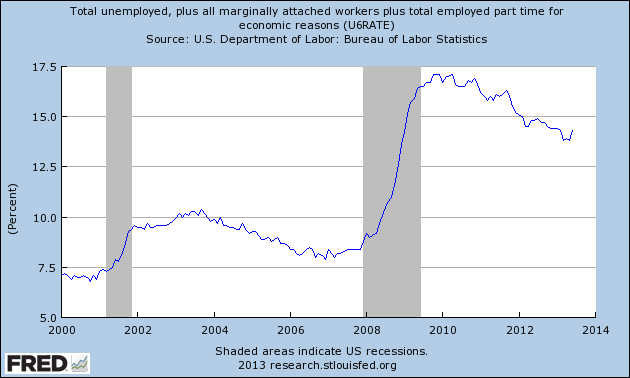 If you take the 11.8M unemployed and add half of the 8.2M part-timers and all the 2.6M “marginal workers”, you get a total of 18.5M jobs that need to be created. At a gain of 200k per year it will take 7.7 years to reach full employment, or about 2021. The rate of job creation is accelerating at a rate of about 25k jobs/month each year, which would get us to full employment sometime around the end of 2017. But this is complicated by the fact that more young people have been entering the Civilian Labor Force, about 2M in the last year, yet when Baby Boomer retirement picks up we will eventually see a shrinking Civilian Labor Force.

How good has the news been? Given the Barataria prediction that we will hit something like full employment around 2017-2018, in time for the next upward economic cycle, we’re pretty much right on track. The news is good, but not really all that good. We still have a few years to go in this Managed Depression – but we’re on the upswing. It’s time to watch some of those details!