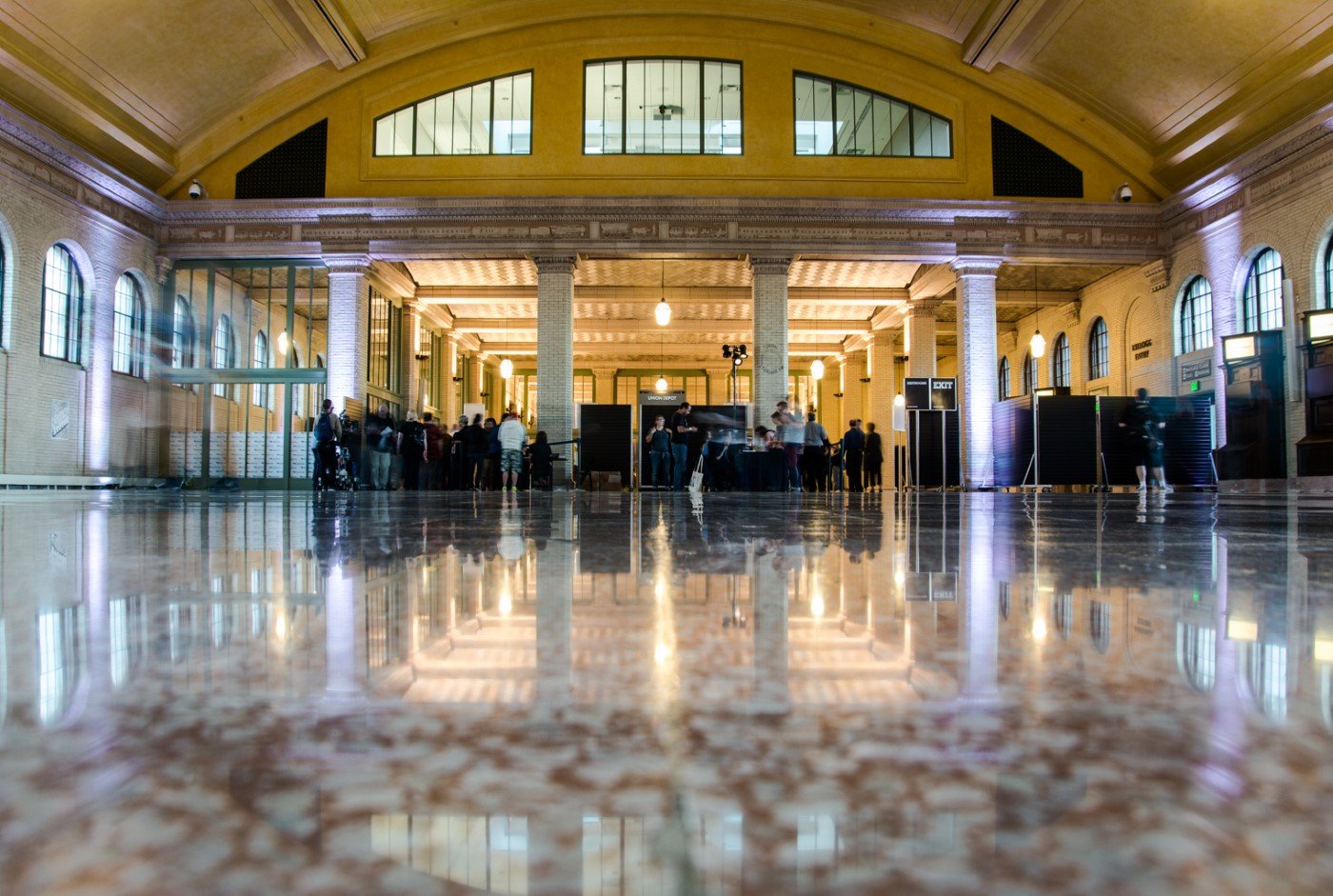 Patti Smith was the clear attraction at the Station to Station art happening at the St. Paul Union Station on Thursday night (September 12). And she shone. She played with her son Jackson and musicians she introduced as Gary, Justin, Mark, and Josh. The backup band was good; watching mother and son on the stage was worth the price of admission. He watched her every move with adoration and as if he were responsible for making sure everything else on stage went well—and he did.

She sounded great. She played for about 40 minutes, her songs including “Because the Night,” “Redondo Beach,” “People Have the Power,” and a few others. Her voice sounds the same as always, with that slight dip when holding a note. Her natural way on stage diffused any pretension in the room. When my new songwriting friend loudly suggested she run for President, she was quick to offer a platform of pumping money into Detroit, not Syria. She also got cheers when after two songs she banished the professional-looking photographers from the front. Ironic, at an event that otherwise seemed to be over-spilling with photographers—both professional and Smartphone types.

Cameras poised, everyone was primed for something to happen. After all, Station to Station is an art happening. It is three-week art happening on a train. It is making nine stops between New York and San Francisco. The event in St. Paul included musicians, performance art, visual art, film, a maker station that was more demonstration than making, and lots of posing!

The fun thing about an art happening is that everyone has a different experience. I brought my 15-year-old daughter Lily, so that gave me a new perspective. The crowd included all ages and lots of arty and musical types. As Lily pointed out, we could have started a roaming mother-daughter fight at the event and everyone would have assumed we were actors. The night had that art-imitating-art feel where you weren’t sure who was there on the clock and who was a patron.

Outside the Union Depot were several traveling show tents; each had a different performance or opportunity for interaction. We checked out the white room with the mirrors and big white bed. Kind of fun, but with that sweet sticky dry ice smell. There was a car with mushrooms growing in it. And a tent that promised to give the secret of life—starting with four forces: gravity, electromagnetic, weak nuclear, and strong nuclear.

In­side were maker stations and a place where I believe you could buy jeans. (The event is sponsored by Levi’s, a fact that was clear but not too overblown.) Art hung on the walls of the hall. A favorite of mine was Catherine Opie’s picture of ice fishing houses. Films were shown between performances. There seemed to be a few that focused on dots – including Self Obliteration by Yayoi Kusama. I was thankful that my daughter was in the bathroom during The Joy of Sex by Kelly Sears—think slightly animated version of the least sexy book ever published!

Wandering inside and out was an earthy looking tribe carrying vegetables and a toddler. I suspect this group was directed by Fritz Haeg. I know I enjoyed the performance much more having recently been to his exhibit at the Walker. There is a homelike appeal to what he does. He draws you in and makes you slow down, even if only for a minute.

There were also three other musical acts on the main stage. I’m sorry to report that we missed White Mystery, a brother-sister duo from Chicago that I really like. We missed them because we had to eat. This is my one complaint of the event. They have Alice Water (founder of the slow food movement) on the train but no food available through the event and no food trucks. Christo’s is in the Depot, but they cannot do the volume or speed required for this sort of event. Luckily Barrio can get you in and out in 30 minutes.

We were back in time to catch No Age. Interesting duet—drums and guitar. Good and loud. A highlight was when the guitar was placed on the drum kit and played with drumsticks. Eleanor Friedberger, from Fiery Furnaces, sang songs about trains. She has a 60s motif with a modern spin. Behind all performers were amazing videos of trains and skyscrapers that mashed up geometry with color and horizons. A beautiful concert!

A final note on the unexpected, which is really what you want in an art happening. The best part of the night was the look on Lily’s face when Patti Smith took the stage and Lily realized that she and Patti had been standing next to each other during the Eleanor Friedberger performance. Not a bad start to high school!