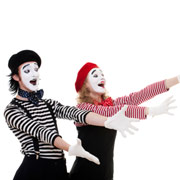 Other under circumstances, Thursday’s tense state legislative hearing on the State of Minnesota’s contract with its workforce, could be mistaken for an entry in this year’s Fringe Festival.  It was weird. It was funny. And, it took itself way too seriously. What works as off-beat theatrical performance, however, isn’t entertaining as responsible public policy.

In a nutshell, conservative policymakers are determined to bash government, government employed workers, and almost anything related to government except policy swinging government’s authority behind powerful, wealthy interests. Rather than address Minnesota’s real challenges, conservative policy leaders seek to distract Minnesotans from the issues that matter. Thursday morning’s hearing was no exception.

Here are the basics. Minnesotans collectively decide how we want our state to function. We authorize our state government to carry out our collective will. The State, in turn, hires workers, negotiating a contract with the workforce. Contracts are generally good for three years. Governor Dayton’s administration negotiated the current contract, the subject of the legislative hearing, with the state’s two largest public worker unions.

Reflecting Minnesota’s slow economic recovery, the contract is actually kind of stingy. On an economics level, that’s to be expected. The low-interest/slow economic growth environment keeps labor costs low and stable. This creates a different, long term problem as the larger state economy keeps putzing along rather than growing. But, under the circumstances, it’s an adequate contract for everyone concerned.

Conservative policy makers, however, have a different agenda. They want to crush the public employee unions and are determined to drive wages down to minimum wage levels. At the hearing, conservative legislators wasted little time getting to the bashing.

There’s the rub, they’re interested in bashing and distracting, not in creating a path forward which is why the hearing felt like a Fringe Festival play. Conservative legislators’ standard line is that State workers earn more money than their private sector counterparts. It’s an easy, old claim. It’s just not true. Minnesota public sector workers earn less than private sector employees.

Consider this differently. Minnesota is already getting a heckuva good deal from its workforce. I would think that conservative legislators would be trumpeting this outcome. Instead, they’re working hard to create another public policy distraction that does nothing but hold back growth and prosperity. The Subcommittee on Employee Relations may stage a good show but it’s not doing much for Minnesota’s real needs.