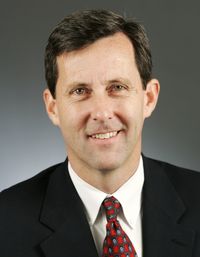 While the frame being set up by one progressive publication for talking about the State Policy Network is that it is composed of a “well-funded network of conservative think tanks that you’ve probably never heard of,” this narrative isn’t particularly accurate for those seeking to describe the situation in Minnesota, if the ambiguous wording is meant to modify or refer to the think tanks themselves.

Rather, it is the presence of the SPN itself –and the influence of its funders–that is little known here on the wind-swept prairies and sylvan North Woods.

The North Star State has heard of the Minnesota groups, which include the Center of the American Experment, Emmer running mate Annette Meeks’ Freedom Foundation of Minnesota, Intellectual Takeout (a project spawned by CAE) and the Minnesota Free Market Institute.

The Center of the American Experiment is hosting an event “Rethinking Minnesota’s State Workforce” on  Tuesday, April 26th from 7:30-9:00 AM at the Saint Paul Hotel. The breakfast ($30members/$35non members)features Rep. Keith Downey who is currently leading the discussion at our state legislature, and former Sen. Roger Moe. This is very much related to pension and spending reform. See you there!

I’ve left a call with the CAE to make sure it took place, as there is twitter silence on whatever the rethinking is, and the occasion isn’t in the CAE event archives. Perhaps more rethinking went on all around, or Moe infected those attending with a classic case of Norwegian-American stoicism.

Not that Downey has grown shy with his opinions. He turns up on MPR’s One-on-one debate: Would outsourcing government services save Minnesota money? today, in a discussion with Senator Barb Goodwin.

A new article in Mother Jones looks at The Right-Wing Network Behind the War on Unions:

From New Hampshire to Alaska, Republican lawmakers are waging war on organized labor. They’re pushing bills to curb, if not eliminate, collective bargaining for public workers; make it harder for unions to collect member dues; and, in some states, allow workers to opt out of joining unions entirely but still enjoy union-won benefits. All told, it’s one of the largest assaults on American unions in recent history.

Behind the onslaught is a well-funded network of conservative think tanks that you’ve probably never heard of. Conceived by the same conservative ideologues who helped found the Heritage Foundation, the State Policy Network (SPN) is a little-known umbrella group with deep ties to the national conservative movement. Its mission is simple: to back a constellation of state-level think tanks loosely modeled after Heritage that promote free-market principles and rail against unions, regulation, and tax increases. By blasting out policy recommendations and shaping lawmakers’ positions through briefings and private meetings, these think tanks cultivate cozy relationships with GOP politicians.

While in other states the think tanks may be groups “you’ve never heard of,” the organizations listed in the SPN’s directory for Minnesota haven’t been wallflowers in the Gopher State’s policy debates:

Center of the American Experiment

The final two listings need to be updated. The Citizens Council on Health Care renamed itself Citizens Council for Health Freedom. It is led by Twila Brase, who organized the protest back in January on the second day of Dayton’s term, when the governor was holding a press conference to sign “an executive order aligning Minnesota’s health care for the poor with expanded health care assistance.“

Bluestem chronicled the attempt by one rising star in the Peppin-Golnik public affairs–public policy constellation to erase the fact of Brase’s high profile in Conservative sisterhood is powerful: VOICESPAC director throws Twila Brase under the bus after anti-Dayton protest fiasco.

An aside: given the stabling of so many of Minnesota’s conservative operatives in private-sector, for-profit public affairs shops (witness the recent flight of Tony and Bridget Sutton to sinecures associated with Steve Knuth’s Public Affairs for instance) perhaps a map of this world, exempt from the sorts of disclosure required of non-profit think tanks and registered lobbyists and political committees of all stripes, assembled by an intrepid journalist might prove a fascinating read.

And the final group in the SPN list is no more. Known for its successful efforts to repeal the Profiles of Learning, as well as its close association with Michele Bachmann’s early political career, Edwatch has closed its doors, and its place in Minnesota conservative advocacy has been taken by Education Liberty Watch. Led by Dr. Karen Effrem, the group’s board includes such education stalwarts as radio talk show host Sue Jeffers and attonery-activist Majorie Holsten, who is usually accompanied at Tea Party rallies and other Republican gatherings by her pot-bellied pig.

Whatever one thinks of these groups, or the sometimes incurious reporting about them by Minnesota’s political press corps, none is a shriking violet, especially not the pig, with their leaders’ op-eds sprinkled liberally on the state’s opinion pages and testimony peppered across legislative committees.

Take the Minnesota Free Market Institute’s president and general counsel Kim Crockett as an example. Her op-ed piece on public pensions, Minnesota’s pension tensions, appeared in the Star Tribune on April 12. Now she’s taking her act on the road and appearing at Tea Party and Republican meetings across the state, according to the group’s events page:

Kim Crockett will be speaking (pensions, public unions and limited government) at the following events over the next few weeks:

On the national level, The State Policy Network is associated with another group with shared goals, the American Legislative Exchange Council, that has been getting its own bit of attention next door in Wisconsin.