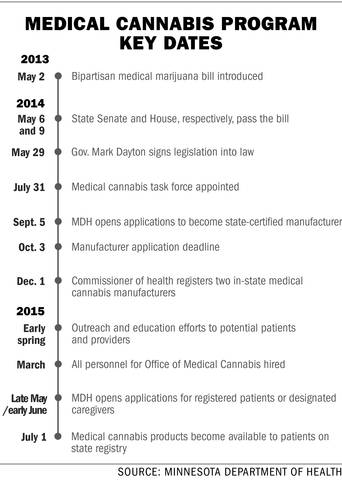 Minnesota advanced in its plan for making medical marijuana available for patients next year as it opened up applications Friday for potential manufacturers of the drug.

State health officials say the results of the monthlong application period will play a role in the success of the new law’s implementation. Minnesota plans to manufacture and distribute medical cannabis by next July.

The state will have two manufacturing plants, and each will service an area of the state based on congressional districts.

“Picking two quality manufacturers is a key dependency,” said Manny Munson-Regala, an assistant commissioner for the Minnesota Department of Health. “We don’t do this, the program doesn’t work. Patients don’t get quality medication.”

Once it’s completely implemented, the law will permit some Minnesotans with terminal illness, glaucoma, HIV/AIDS, seizures and other types of debilitating conditions to use medical marijuana in liquid, pill or vaporized form to treat qualifying health conditions.

Each of the two selected medical marijuana manufacturing centers is required to have one dispensary by 2015 and four by 2016, he said. By then, the distribution centers will hopefully be dispersed throughout the state to increase the drug’s accessibility, Munson-Regala said.

“The manufacturer will run the retail locations of the dispensaries from seed to sales — the entire process,” he said.

The 36-page application, due Oct. 3, includes a $20,000 fee. It calls for candidates to provide 20 paper copies of their outlined business plan including details on facilities, operations, ownership and finances if they were selected.

Munson-Regala said the future of medical cannabis in Minnesota will strongly depend on the selected manufacturers. But he said it’s early in the law’s rollout, so there are many questions that need answering.

“Is there more demand than [the manufacturers are] capable of meeting? Is there evidence that people are being helped?” he said.

Minnesota could see more facilities in the future, Munson-Regala said, based on the outcome of the 3-month-long selection process for manufacturers.

Sections of the application ask for detailed descriptions of cultivation processes and award “bonus” points for efforts like crafting a substance abuse prevention plan or developing a compassionate need program for those who can’t afford medical cannabis at list prices.

In Minnesota, the facility that’s used to grow the plant must be enclosed, Munson-Regala said, which could mean indoor warehouses or fenced-in greenhouses.

A panel of 15 officials, whose names haven’t been released yet, from government agencies and departments will score the applications based on their comprehensiveness, strength and merits, he said. Those scores will narrow the pool of candidates, some of whom will present to a panel and give tours of their sites later this year.

Officials will evaluate the financial stability of the companies along with how they plan to cultivate the plant, produce it safely and transport it securely, Munson-Regala said.

The safety of both the site’s employees and future patients are also of utmost importance, he said.

In December, the state’s commissioner of health, Edward Ehlinger, will register the two manufacturing sites.

In addition to the application, the health department released a second draft of manufacturer rules Friday that outline and provide details on things like packaging, advertising and record-keeping for medical cannabis facilities.

Other states where medical marijuana is legal have handled the manufacturer selection process differently. Twenty-three states have legalized the drug.

Once the sites are selected, the health department will turn its focus to patient enrollment and outreach.

“The more work we invest in this phase to get it right, the less work we have later on,” Munson-Regala said.